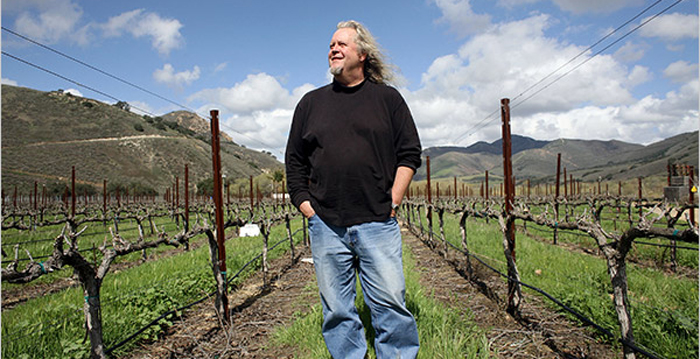 On a recent trip to California, my colleague (Mark Ross) and I had the opportunity to visit the famed joint winery of Au Bon Climat and Qupé in the Santa Maria Valley. I’ll be honest and say that I hadn’t tasted their wines too many times and was expecting the stereotypical big, brash style with oodles of oak…with no hint of varietal finesse and class!!! Well as per usual…I was wrong!

Founded in 1982 by the great Jim Clendenen (left), the ABC winery is located in the world-famous Bien Nacido Vineyard and concentrates on the classic Burgundy varieties of Pinot Noir and Chardonnay. As well as using fruit from estate vineyards (owned by Jim), ABC also sources fruit from several vineyards within the region, very much like a negociant would in Burgundy, utilising longstanding relationships with the growers to source the best fruit from their vineyards.

In fact from the moment we were greeted by Marketing Manager Rob Fry at the winery, the whole visit had a very artisan/Burgundian feel to it. Even in the throws of the new vintage the atmosphere was very relaxed, with Rob being one of the coolest men I have ever met (think the Dude from the Big Lebowski). I felt like the Beach Boys should be playing in the background!

Back to the serious stuff…after a brief tutorial on vineyard and the regional characteristics, we went in to taste a wide range of single vineyard Chardonnay and Pinot Noir from the 2007 vintage, which happens to be an absolutely stonking year.

This tasting was a revelation, the key fact standing out was the hugely different characteristics from each of these vineyards. The winemaking seemed to be very much hands off in approach, with the oak supporting the structure and identity of the wine. From the earthy expanse of the 2007 Nielson Vineyard Pinot Noir to the focussed opulence of the 2007 Knox Alexander, ALL of the wines were flawless, with preference purely being down to preferred style. This really was like tasting in Burgundy, experiencing the contrasting styles between fruit grown in vineyards within Santa Maria and surrounding regions was fascinating and shows how good New World Pinot and Chardonnay (when in the right hands!) can be.

As if that wasn’t enough, we then went on to taste a range of wines from Qupe (these wines are made by Bob Lindquist) in the same winery. Concentrating on Rhône varietals, it is a very similar (impressive) story to ABC. As well as Estate holdings, fruit is sourced from meticulously managed vineyards within the region, with the best being bottled as individual cuvées. I was blown away by the aromatic profile of the 2007 Parimina Vineyard, reminding me of a top Côte-Rôtie from the Côte Blonde, whilst Mark was a fan of the 2007 Elises Vineyard, which offered huge concentration of fruit and savoury notes, while retaining its freshness.

Without doubt this was one of the most fascinating winery visits I have experienced and it really wasn’t expected. My only regret is that we didn’t take Rob up on his offer for lunch, as we had to drive to Las Vegas and we had also had a rather lavish lunch at famed restaurant “The French Laundry” the day before…but that is another story!