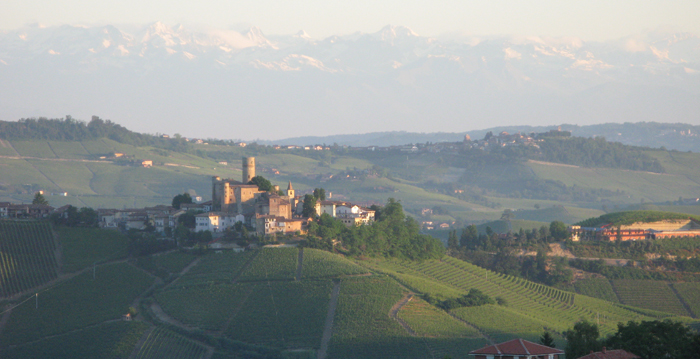 Recently back from a ten day buying trip to Piedmont, briefly to Tuscany and a first visit to Umbria.

More precisely I spent two days in and around the village of Serralunga d’Alba, the third largest Barolo commune at 311ha (behind La Morra & Monforte d’Alba), ex 1786ha for all Barolo. As with Burgundy I find it pays to passegiare among the vines, to see for oneself the varying terroirs: from the deep red clays at the base of the village, home to Fontanafredda, to the finer calcareous rich marls of the top sites, at 450 metres elevation heading out towards Roddino. Conterno’s Cascina Francia & Giacosa’s Falletto are to be found among the latter.

Serralunga reminds me of Vosne-Romanée; the suave, subtle elegance of the wines are underpinned by an aristrocratic structure and mineral, rock-like fruit mesh. So different from the velvety Chambolle-esque feel of Castiglione Falletto or meaty, Nuits St. Georges-like full-bodied notes of Monforte. Massolino, Conterno and Giacosa remain the top addresses, blessed with fine vineyards and gentle large oak ageing. Barolo 2005 looks promising if earlier maturing than 2004; 2006 richly structured for the long term; while the 2007 looks cooler and perfumed.

Soldera’s Casse Basse, en-route to Umbria proved a fascinating detour. Gianfranco’s policy of ageing his Brunello wines for up to 6 years in large slavonian oak flies in the face of current tastes (for french oak) yet delivers finely-tuned, harmonious wines; the 1994 Brunello opened over lunch appeared muddled yet blossomed into a rose-scented beauty. The 2001 Riserva, by contrast, gave a brief moment of redcurrant brilliance before closing down; a promising future without doubt.

And finally to Umbria where three days in the field threw up a less-than-convincing view of Orvieto, bar the fine wines of Palazzone, yet witnessed a far more encouraging prognosis for red Sagrantino di Montefalco. Spurred on by being awarded its DOCG in 1992, the region was put on the map among the important American market by Arnaldo Caprai. Since then there has been a rash of plantings, taking the number of wineries from 15 in 2000 to 42 in 2008 (and to 662ha).

More than a few of the new estates have unsurprisingly sought to ape Caprai’s success, producing ‘marmalata’ wines, thickly concentrated with high alcohols and dangerously-low acidities; popular perhaps with journalists but less comfortable at the dinner table. One contributor might be that the best (vineyard) sites have traditionally gone to olive groves, relegating the vine to the less than ideal clayey bottom of the slope; that a tiny percentage of the best fruit is still hived off to produce Passito Sagrantino or that a significant number of growers still farm cereal alongside vines, thereby increasing their reliance upon wine consultants…Anyway, the future’s bright, with the likes of Bocale & Bea showing the way forward.