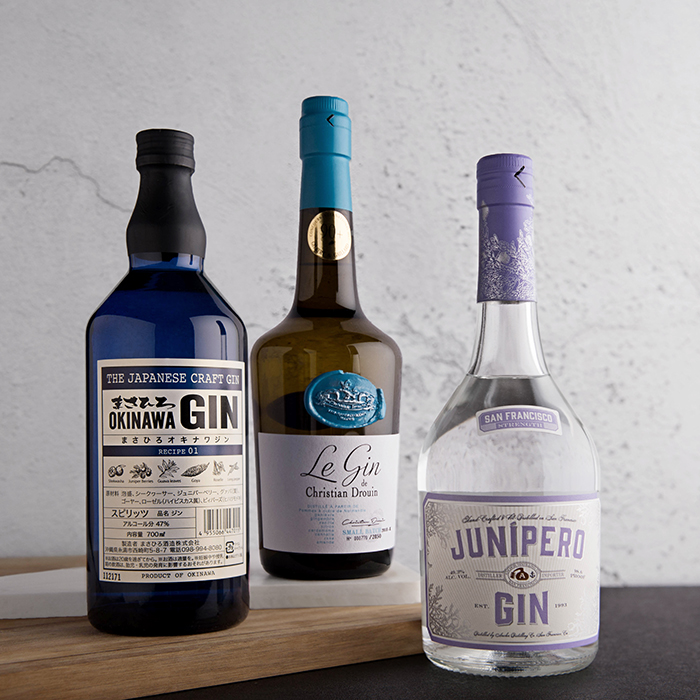 The world of gin continues to expand; and, whether it’s the latest release from a major brand or a new micro-distillery creation, it can be hard to see the gin for the, well, gin. Here’s our short-list of the three most exciting gins right now

The gin boom over the last decade has been well-documented by many, but it is still astounding to see the rate of growth and progression in the category. Consumer appetite for gin continues to grow, with new brands and flavour-driven styles adding further fuel. At Berry Bros. & Rudd alone, gin sales have grown by 34 percent over the last year and show no signs of slowing down. If so desired, our shop at 63 Pall Mall could fill its shelves solely with the juniper-based spirit. We, however, stock a very exclusive 20 gins, whittling down to a range that is carefully selected for quality and individuality. Of the 20 currently on our shelves, these are the three we can’t stop talking about (or, indeed, tasting).

As with the vast majority of modern gins, the botanicals used in the distilling process are quintessential to local cuisine. In the case of this Japanese gin, shequasar, a small, green citrus fruit native to Okinawa is used and the recipe also includes goya, the anti-ageing, cucumber-shaped bitter melon. These locally foraged and strange botanicals from Okinawa give a sense of place to the gin which is totally unique and truly exotic to our palates.

Happily, though, it still tastes like a gin (just). It keeps a core of juniper, and balance is achieved by the exceptionally quality and pin-point precision of the distillation. It is an amazing craft.

This gin is made just a hop, skip and a jump over the channel in Normandy and is enriched with botanicals that we are more familiar with seeing in our homes. The Drouhin’s main business is Calvados and their gin is concentrated around the flavours of Guillaume Drouin’s (Christian’s son’s) mother’s kitchen. Produced mainly for himself, the botanicals include apples, vanilla, cinnamon, rose and almonds, all of which contribute to the more traditional and homely taste that is integral to his identity and upbringing.

It’s exciting to drink this as a G&T, to experiment with possible garnishes. The fresh apple-led flavour also lends itself to a delicious Martini that is perfect for Calvados devotees.

In the early 1990s, gin was at its lowest nadir and it really couldn’t have been less cool. But a handful of mavericks started to create gins that bucked the trend of standardised production: Junipero, the most juniper-driven gin out of this selection, was one of the gins that started a craft gin revolution.

Gin had lost its juniper flavour and so the team at Hoteling & Co (formerly Anchor Distilling) in San Francisco concentrated on juniper and pine flavours, giving back the liquid’s personality and refocusing on the core of gin’s character. The result is a distinctive, intriguingly complex gin that is light, crisp and clean. Neat, or in a cocktail, it never fails to deliver on flavour and texture.

Explore our full range of gin at bbr.com or visit us in-store at 63 Pall Mall.