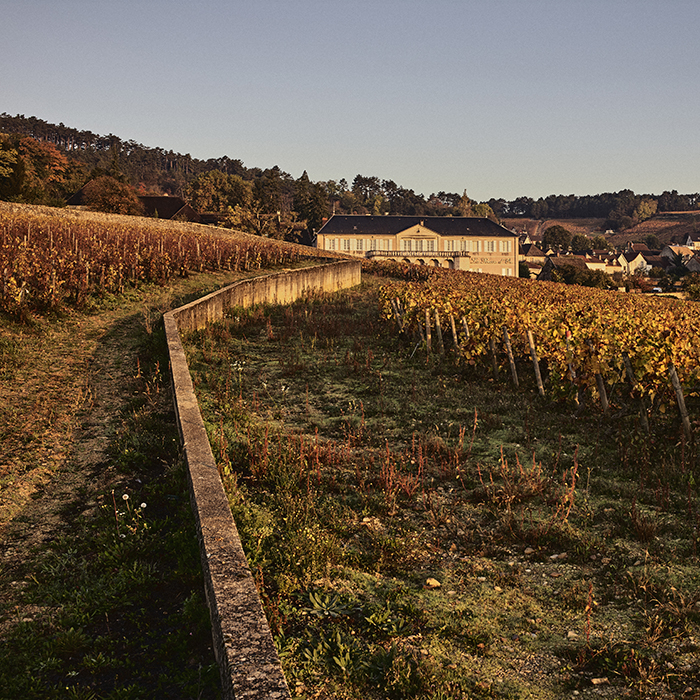 The 2017 vintage in Burgundy was excellent, providing both quality, quantity and relief for the region’s vignerons. Ahead of the release of the 2017s en primeur, our Buyer Adam Bruntlett provides a detailed run-down of the exact conditions that made it such a success

After the bruising experience that was the 2016 vintage, 2017 represented a relatively easy ride for most of Burgundy’s vignerons – at least for those in the Côte d’Or and Mâconnais, although Chablis and the Beaujolais suffered once again at the hands of mother nature.

The truth, however, is that 2017 came perilously close to repeating the disaster of 2016. Another warm start to the season in February and March led to an early budbreak, and once again growers were looking nervously at the weather forecast, crossing their fingers for low pressure and mild weather. Alas, the middle of April saw temperatures plummet across France, rarely rising above freezing point for around two weeks. Between 19th and 21st April the mercury dropped to minus 6°C for three consecutive nights; the consequent frost affecting around 20 percent of the Chablis appellation despite growers lighting candles, turning on water aspersion systems and burning straw bales. Worst-hit was the northern sector, the rive droite (right bank), home to the Grands Crus and such renowned Premiers Crus as Montée de Tonnerre, Fourchaume, Mont de Milieu, Fourneaux and Vaucoupin. The extended period of cold was typical of a traditional spring frost, a sharp contrast to 2016’s freak “burning” frost.

The rest of Burgundy survived the first week or so, but then exactly a year and a day after the fatal frost of the previous year, on the night of 27th April, history appeared to be about to repeat itself as the forecasters announced a severe frost. A couple of different theories exist as to why and how catastrophe was averted.

The more romantic explanation is the fairytale of the vintage; the solidarity of the vignerons coming together through the local syndicats to mobilise and burn dampened straw bales at strategic points. The aim was twofold: firstly to raise the temperature by a few degrees, and secondly to create thick cloud cover in order to avoid the burning effect of the rising sun’s rays the day after, thus avoiding a repeat of 2016. The resultant thick, acrid smoke created by this process unsurprisingly went down rather badly with the residents of Beaune, as well as drivers on the Route Nationale, who were unable to see anything through the black cloud.

The second, less romantic, theory goes that the lack of rainfall the night before meant that the vineyards were dry, which was not the case in 2016. As there was no frozen water on the buds, there was no magnifying effect and consequently no burning effect on the vines as the sun rose the following day. Whatever the actual reason, the result – besides a saved crop – was an increased spirit of co-operation and solidarity amongst vignerons, something which is not always evident in a competitive region where family disputes and jealousy can rumble on for decades.

The final result was that there was just a little damage to low-lying vineyards in the Côte de Beaune, particularly those classified as Bourgogne on the “wrong” side of the road. Additionally, some frost-prone sectors of St Aubin were hit, notably including those which make up Olivier Lamy’s La Princée cuvée, while Caroline Gagnard’s Sous Eguison vineyard which sits above St Aubin yielded only half a normal crop. Of all the Burgundy appellations, Chablis suffered the worst of the frost damage, with losses of over 50 percent in some vineyards – the extended period of cold weather having had an adverse effect on flowering, thus reducing the size of the eventual yield. The Mâconnais, Beaujolais and Côte de Nuits were largely unaffected.

Immediately after the frost, 2016 and 2017 began to diverge. In 2016, damp and miserable conditions set in immediately after the frost, while 2017 saw an extended period of warm, dry weather which made the rest of the season much more manageable. Mildew, seemingly an ever-present threat nowadays, was not therefore a significant threat this year and any outbreaks could be treated quickly because the dry conditions made access to the vineyards straightforward. In Chablis, this warm, dry weather allowed the vines to recover and regain their strength, and interestingly the frosted wines show greater concentration than their peers but lack the slightly angular, ill-at-ease and disjointed nature of their predecessors, as though the season itself is imprinted on the wines.

Whilst much of the region had a fairly easy time of it for the rest of the growing season – many remarked that it’s the kind of year they’d sign up for every year – the north of Morey-St Denis and certain sectors of the Beaujolais suffered hail damage on 10th of July. Perhaps as punishment for having the audacity to survive the frost in 2016, Dujac lost a chunk of their Monts Luisants and Clos de la Roche; Jérôme Castagnier also lost some fruit, but saw the positives, arguing that it acted as a natural green harvest. Further south, Thibault Liger-Belair lost so much fruit to the hail in Moulin-à-Vent that it cost him more to send pickers into the vines than he will make from selling the wine. Similarly, Lafarge-Vial made just 8hl/ha in some of their Chiroubles and Fleurie vineyards, while some parts of the Côte du Py were also badly affected. Fortunately, the regularity of hail damage means that growers are used to it and can deal effectively with the effects, using sorting tables and careful selection to eliminate damaged fruit and minimise the impact on the finished wine. 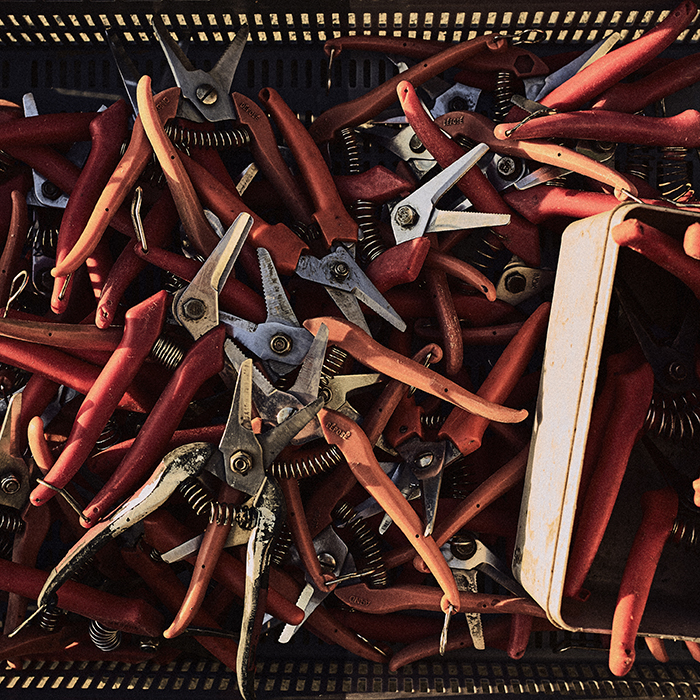 Summer was otherwise warm and sunny, with the south drier than the north and regular instances of rain falling at opportune moments to avoid any significant drought stress and allow maturity to progress unimpeded. By the middle of August, however, it was clear that ripeness was arriving quickly, and an early harvest was in the offing. Before mentioning harvest dates, I would like to provide some clarification because, with earlier and earlier harvests, this is a subject of much debate in Burgundy, with growers arguing between themselves about whether their neighbours pick too late or too early. The answer, as ever, is not simple; comparing bare harvest dates between growers even in the same vineyard is a dangerous and inexact science because so many factors influence when ripeness is achieved, and indeed even one’s definition of “ripeness” can vary wildly! The age of vines, number of bunches per vine, pruning method, type of rootstock, clone or selection of vine, use of chemicals or otherwise, and many, many other factors all play a role in deciding when fruit is ready to be picked.

In the Côte d’Or, Arnaud Ente was among the first to begin picking, starting around 25th August, with Dominique Lafon beginning three days later. In the Beaujolais, most began harvesting in the final week of August, while in the Mâconnais the Bret brothers started early on 26th, aiming to preserve freshness. Olivier Merlin was out early in relation to many of his peers in La Roche Vineuse, beginning on 30th August. For whites it was clear that it was important to preserve acidity and freshness, as there was no rain on the immediate horizon. With Pinot, however, many growers felt they faced a choice between maintaining acid/sugar balance – by picking early – and achieving phenolic and tannin ripeness by waiting a little longer for some rain to unblock photosynthesis.

It is difficult to say exactly who was right, but there were certainly two camps and it is true that good wines have been made with both approaches. However, from extensive tasting across the Côte, it certainly seems from the autumn 2018 barrel tastings that waiting longer did not have a detrimental impact on acid/alcohol balance, and has in fact added an extra layer of density and smoother tannins. How much effect this has on the wines as they age is difficult to say with any great certainty.

Yields are healthy, but where growers did the necessary work in the vineyards, either through pruning short, de-budding or carrying out green harvests, they are not excessive. Chardonnay yields were invariably below the permitted maximum, typically hovering around 50hl/ha, perhaps because Chardonnay tends to bud earlier than Pinot, and therefore suffered some limited frost damage causing millerandage at flowering and hampered subsequent fruit-set. An alternative suggestion, proposed by Jacques Carillon, was that the weather at flowering was arguably too hot. Pinot Noir yields were of a similar numerical level to Chardonnay, but the two varieties do not necessarily support higher yields in the same way, Pinot suffering more from excessive production than the more robust Chardonnay. As a result, whites picked at 55hl/ha are often quite concentrated, while reds at the same level may be somewhat lighter.

The resultant wines are an absolute joy to taste and drink. The whites are undoubtedly the stars, particularly Chablis, surpassing even the 2014s in all-round balance – which, while receiving intellectual acclaim, appear austere in comparison to 2017. In the Côte de Beaune, the wines are a hybrid of 2014 and 2015, with the energy of the former and the charm of the latter, while the Mâcon wines offer a sunnier expression of Burgundian Chardonnay and will give plenty of enjoyment.

The reds are the kind of wines my colleagues and I love; fresh, transparent, juicy and gourmand, with perfect balance and a classic Burgundian Pinot Noir profile that you simply cannot find anywhere else in the world. They are packed with delicate red berry fruit, subtle but chalky tannins, crisp acidity and modest alcohol levels. At all levels, they are simply the kind of red wines you can’t help but want to drink, and the regional wines will be ready from 2019. As you progress up the quality scale, the wines become more serious and age-worthy, and the structure that is already evident in the best wines will build to give wines which should age well for up to 20 years but are likely to drink well throughout their lifetimes. In the Beaujolais the wines are an exciting hybrid of 2015 and 2016, with the rich fruit and charm of the former and the minerality and freshness of the latter. This has given wines which have such perfect balance that they are a joy to taste now but will age wonderfully for many years.

Our Burgundy 2017 En Primeur offer will launch on Thursday 3rd January at bbr.com/burgundy2017. Read more about the vintage here.