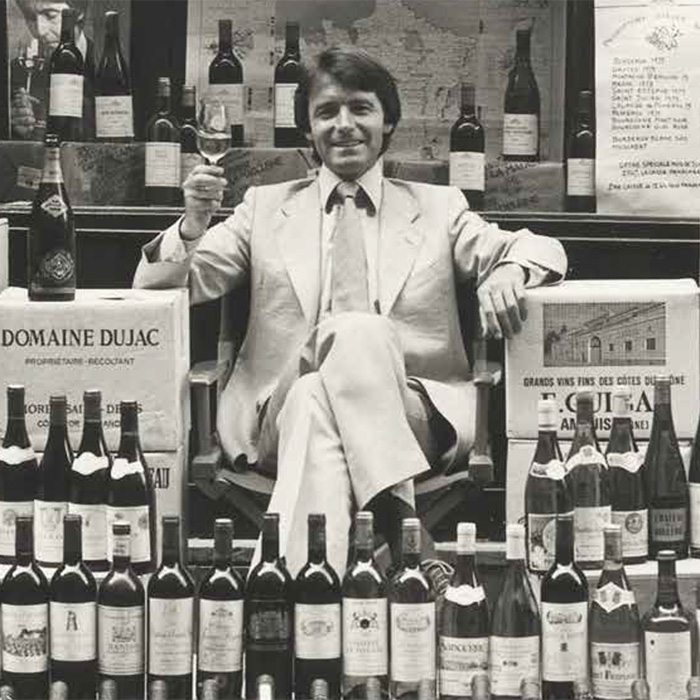 On St George’s day, we celebrate all things English by speaking to one of the original English gentlemen of wine, Steven Spurrier. Decanter Man of The Year 2017, much-revered character within the wine world at large, and English Sparkling winemaker, he will release his memoirs “Wine: A Way of Life” next month.

“It’s a very personal tale,” says Spurrier as we sit down to chat by the fire in the Parlour room of No.3 St James’s. He has arrived this afternoon from visiting the British Museum; tonight, he will attend the Decanter Man of the Year awards, at the Lanesborough Hotel (this time last year, he was receiving the accolade himself). It is fair to say Steven Spurrier has had an enviable, much-followed, wine career to date – one which has covered many aspects and positions within the trade, and is brim-full of interesting stories. “The whole kernel of the idea [for the book] came from knowing that, at some point, I should write something for my grandchildren on what life was like in the wine trade.”

From “comfortable beginnings”, despite being born during the war, Spurrier attended Rugby School (a time he describes as “very boring” on which the book sheds some further light) before then studying at the London School of Economics. He began working in the wine trade around the corner from Berry Bros. & Rudd, at what was then Christopher’s Wine Merchants on Jermyn Street. Wine, however, was not perhaps what his parents had originally intended for him: “we’ve been Church wardens without a break in our family church since 1643 so when I was on the cover of the Gault & Millau Magazine in Paris in the mid-80s polishing a glass in my wine bar, I sent the picture to my father and said, ‘350 years of Church wardens have come to this.’” His father, he says, was initially dismissive of his choice of vocation “he thought being in trade was rather common.” It wasn’t until later on that they began to take him seriously. “He and my mother were checking their car in at Bordeaux airport in the 1970s at the Hertz desk, when the girl behind the counter looked up and said, ‘you’re not the famous wine merchant by any chance?’ so then I received a visit from my parents.”

Spurrier has spent substantial time living in France, most-famed for opening his wine shop “Les Caves de la Madeleine” in 1970 just off Paris’s Rue Royale. But this arrival to the country wasn’t necessarily under the premise of working in wine. “I had a lot of creative ideas and I’d bought a ruin in the south of France and I said to Bella, why don’t we go and live in Provence? And so the day we got married we left on the Golden Arrow.” At that time he was working in antiques – a subject, still very much close to his heart, and had great plans to turn the French house into an art gallery (“I spend much more money on art than I do on wine,” he says); these days, he has a keen interest in outside sculpture and the work of Steven Spurrier, the painter (not the same person).

However, the Provence dream was not to be: “we had a crooked architect who stole a lot of money from us so the dream project never came off,” he says. It was after this that Steven and his wife transferred to Paris. “If it hadn’t been for the area, [the shop] would never have taken off.” A story perhaps reminiscent of Berry Bros. & Rudd’s own initial success, too. He approached this new venture with confidence and it was from this point, on the encouragement from his (mostly) Anglo-Saxon customers, that Steven launched the Académie du Vin in the building next door, the first private wine school in France, and a time during which he wrote five books on the subject. The new owners when he sold the shop didn’t take the school on, but Spurrier is proud to note that the original has not been lost. “On October 24th last year we recreated it at 67 Pall Mall.”

How did Steven learn what he knows now? “Michael Broadbent is my mentor. Alex Lichine is my hero. I read everything there was to read on wine. I was never taught it, but you read all the books.” He adds “Michael’s book, ‘Wine Tasting’ set the rules – no one had done that before.” It’s like art. “You don’t need to be taught how to appreciate art, you need to learn the rules. There would have been no Académie du Vin or Christie’s wine course had I not read that book.”

Steven is now looking forward to stepping back a little, and to becoming an “observing participant”. But he shows no signs of stopping either. Current projects include blending wine in India with winemaker Piero Masi at the Fratelli Winery “it’s rugged vineyard land” – wines mostly made with Sangiovese, a grape he deems he would never wish to be separated from. He will also be hosting an “into the future” tasting with Eduardo Chadwick in Paris and London in early June. A competition between English Sparkling Wine and Eduardo’s iconic brands – the person who has since been awarded Decanter Man of the Year, 2018. The pair hosted “The Judgement of Berlin” together, a reprisal of one of Spurrier’s most famous moments – hosting “The Judgement of Paris” in 1976 – a stake in wine history so prominent that it was made into the movie “Bottle Shock” (Spurrier himself is not a fan). The real events however cannot be underestimated in how much they have since changed the landscape for Californian and French wines, a legacy that still prevails today.

“My last roll of the wine dice is Bride Valley,” says Steven – commenting on his English winemaking project that has proven “a real challenge”, no thanks to the British weather. His wines are now sold all over the world and he is seemingly proud to be part of the English Sparkling Wine movement, even if he remains unconvinced of the new name for the generic body: “Wine GB” – “ghastly.” As with many other aspects of his life and career, there have certainly been difficult moments “I lost all my money in Paris. But now with the book it’s off my chest. […] things did turn out well. It was very much an up and down life.” But as with wine “you learn as you go along. You don’t ever stop learning.”

Steven Spurrier will be signing his book at Berry Bros. & Rudd’s 63 Pall Mall shop on Wednesday 13th June. It is released on the 28th May.