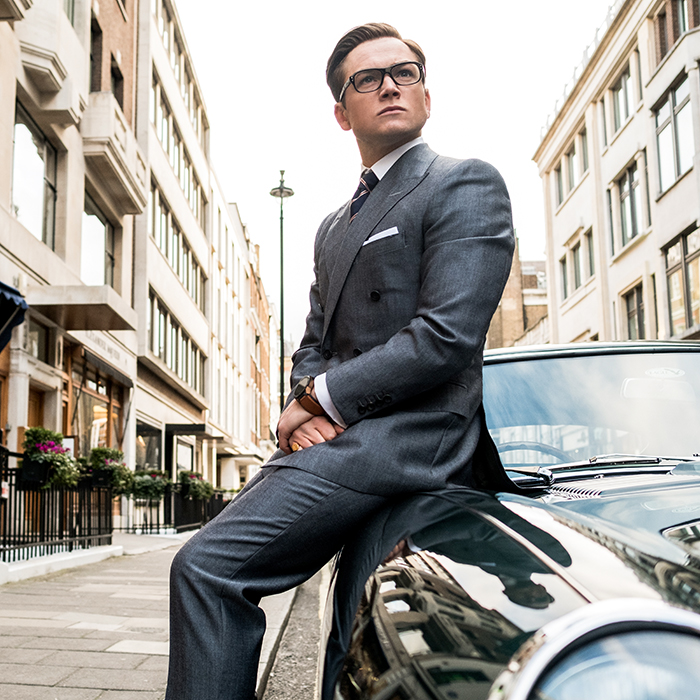 As the second Kingsman film, The Golden Circle, hits cinema screens, we talk to director Matthew Vaughn about the culture of Kingsman, working in London and why Berry Bros. & Rudd was the perfect location to shoot a spy thriller

With his clipped British accent, unmatched manners, sharp one-liners and the ability to shoot his cuffs as effortlessly as he can fire a concealed umbrella gun, Kingsman’s gentleman-spy-in-chief Harry Hart is the ultimate secret agent. Double-07 plus. In him, director Matthew Vaughn has created a love letter to the genre. And in Kingsman he has created a new kind of spy dynasty – one with guns, girls, gags – and, seemingly, no limits.

For those yet to see Kingsman: Secret Service (2014), the premise of the film is this: behind the gleaming shop-front of 11 Savile Row (recognisable to menswear devotees as Huntsman) is the Kingsman tailors, which, in addition to providing excellent suiting, also conceals the headquarters of international super-spy clan the Kingsmen. Harry Hart (Colin Firth), a longstanding member of this elite team, leads the charge in defending the world from megalomaniac super-villain (Samuel L Jackson), while also recruiting a new spy, Eggsy (Taron Egerton), from the wrong side of the tracks. Things do not go entirely according to plan.

Convention-shaking, outrageous, riotous, hyper-violent, exhilarating, comic and shocking – Kingsman pushes all kinds of buttons (and boundaries), so when director Matthew Vaughn knocked at the door of No.3 St James’s in search of a fittingly old-school location for the film’s sequel, it raised a few eyebrows. More still when Berry Bros. & Rudd said yes. 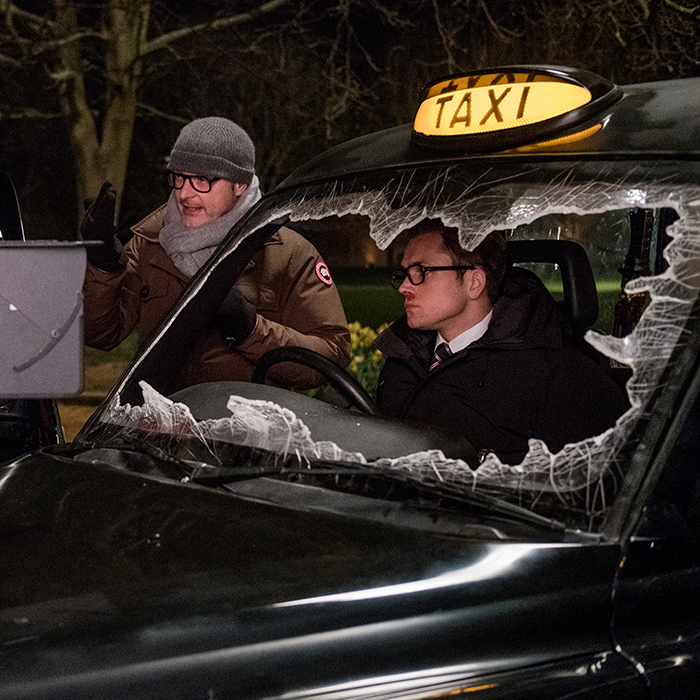 Vaughn earned his stripes as a producer and director early on. He moved to Los Angeles aged 16, desperate to make his mark on the industry – much, he discovered, like everyone else in Hollywood. Less than a decade later, he was back in the UK: “I thought, ‘You know what, I’ll go back to London and try to be a big fish in a little pond,’” Vaughn explains. “I hadn’t really realised that the pond was a puddle and that nothing was happening. But then I also thought that this was an opportunity – in a weird way I felt like I could really make a difference. And now there is a huge film industry. When I started, three films were made that year.”

And what a start it was. Vaughn’s first serious production credits were for Lock, Stock and Two Smoking Barrels (1998) and Snatch (2000) – hugely successful films that brought critical acclaim for Vaughn, as well as delivering an adrenaline shot to the British film industry. Moving on to directing, Vaughn had blockbuster success with titles such as Layer Cake, Stardust, Kick-Ass, X-Men: First Class and, of course, Kingsman.

From drug-fuelled thrillers to potty-mouthed superheroes, these films are poles apart in subject matter, but united by their raucously playful, convention-subverting treatment – Tom & Jerry with state-of-the-art digital effects. And Kingsman is no exception.  “When you do any type of spy genre you’re going to get compared,” says Vaughn. “People like to pigeon hole as quickly as possible and put you in a category and so of course they said, ‘Is it like Bond?’ and I say, ‘Well is it like Bond, or is it like Harry Palmer? Or Austin Powers? Or is it like all three?’ I think Kingsman is its own thing now, its own brand with its own identity and its own tone – so I can imagine in 10 years’ time a new spy film will come out and people will say it’s inspired by Kingsman. Hopefully that’s where we’re at…”

One characteristic is that Vaughn’s agents are committed to keeping the British end up.  “People said, ‘You can’t put them in double-breasted suits,’” he explains. “‘No one’s worn double-breasted suits in years; they’re English and they look ridiculous.’ And I said, ‘Well, bugger off – we’re going to do it and we’ll do it our way and we can make it cool again…’ and so I think we managed to bring back a very British cut and people have been loving it.”

The director’s affection for all things British is palpable (he has even managed to resist the lure of moving to Hollywood “I’m a Londoner,” he says, “Holland Park is home”) – especially when it comes to portraying the idiosyncratic areas of Savile Row and St James’s. “It’s a world I’ve always been extremely fond of and grew up with – going to Savile Row and Jermyn Street – and it felt like an area of London that’s not been forgotten but that’s failed to remain relevant to the aspirational – Bond Street and Sloane Street have blown it away. It’s time to bring Savile Row – and St James’s – back,” says Vaughn. 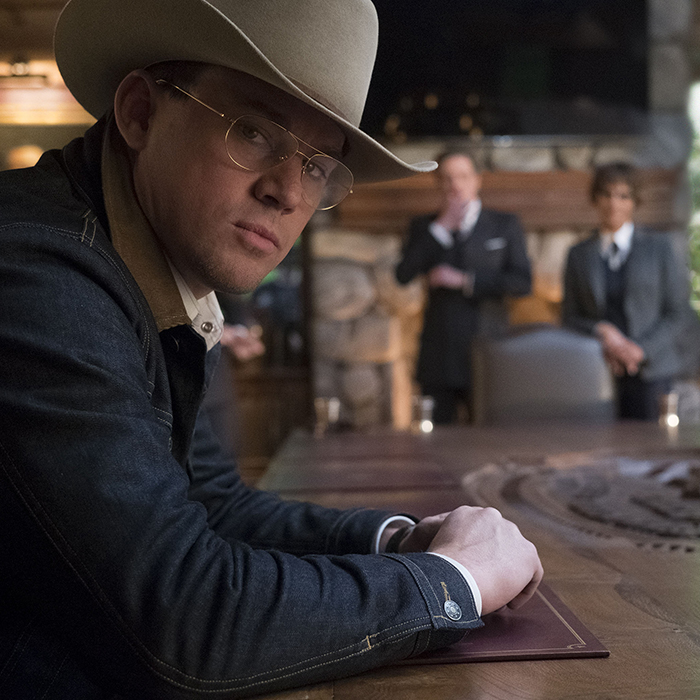 Channing Tatum in his role as Tequila, an agent for Statesman, Kingsman’s stateside equivalent

The film’s characters don’t abandon their old headquarters lightly, but Savile Row’s (rather dramatic) loss is St James’s gain as the Kingsmen find themselves in need of a place to plot their revenge.  Berry Bros. & Rudd’s historic cellars and unique buildings proved to be just Vaughn was looking for. “I’ve known about Berrys all my life,” he says. “It was,” he admits, “always a big joke to talk about Berry Bros. & Rudd – and how expensive they were! I remember going into the shop as a kid and loving it because it was so quirky.”

When the director first saw what lies beneath No.3, he was convinced he’d found the location he needed. “It’s staggering to have all that space in the middle of London,” he says. “When we went there to film it was fun as well because I didn’t know about the cellars – I’d imagined what they were but I’d never been in them. Then, when we went down, I was very pleasantly surprised, because in the script I’d said: ‘There was this huge, amazing cellar with secret vaults hidden inside the wall,’ and we went down thinking we would have to build the whole thing – we didn’t think it could exist and look good enough to put on film – but, lo and behold, it did. It was fantastic to be able to turn up and point the camera and shoot.”

The idea of an international intelligence network based in the cellars is certainly an appealing one (though it should be noted that this is not the first time that our underground vaults have been used for clandestine meetings, intrigue and schemes to change the world order). Seeing Eggsy and Merlin (Mark Strong) bursting through the door of No.3, setting the shop bell jangling, to be greeted by the suit-clad person of Berry Bros. & Rudd’s Creative Director Geordie Willis – who almost managed to claim five seconds of fame in the final cut – is a certain kind of thrill.

But it was not just the cellars that held an appeal for Vaughn, it was also the ethos of Berry Bros. & Rudd. Vaughn explains: “As Simon Berry said to me, ‘Berrys likes to shout quietly,’ – I think that’s a fantastic line and I think that’s what Kingsman is all about – being noticed, but in a discreet way…”

Kingsman: The Golden Circle is out in cinemas now. Find out more about Kingsman in St James’s on bbr.com. Stills and imagery courtesy of Twentieth Century Fox; this article was originally published in the most recent issue of No.3.

One Response to “Manners maketh man”