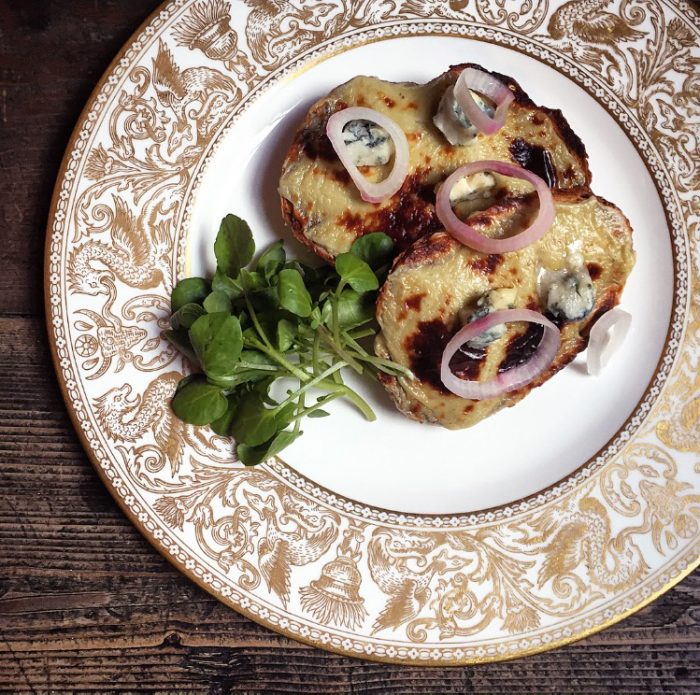 This month our Head Chef Stewart Turner delves into the archives – or, more accurately, the wallpaper – for inspiration, recreating an old Berry Bros. & Rudd dish, an Armagnac, Roquefort and butter savoury

This is a dish straight from the history books, or I should say menus of Berry Bros. & Rudd. I first heard about it four years ago, when Michel Roux Jr was filming a television show with renowned American chef Thomas Keller about his favourite suppliers and he chose Berry Bros. & Rudd as one. Whilst they filmed with the chairman, discussing the history of the company and sampling some old Madeira, as I recall, I had the enviable task of producing canapés for these two culinary greats (no pressure). Simon had mentioned this “savoury” and I thought it would be great to serve a canapé with a link to our history.

Unfortunately there was no written recipe, just the wording on the menus from the Directors’ Dining Room, and everyone was a little bit foggy about what went in it – apart for the three ingredients of the title, so I set about trying to create my interpretation.

When asked if we had any historical recipes that could be used on the blog, it immediately sprang to mind. When we opened our new cellar (the Sussex Cellar) at No.3 it was decided to use old DDR menus as the wallpaper in the loos, and this savoury features heavily from the mid-1930s.

It is essentially a classic savoury that would be served after pudding as an alternative to cheese. My version is a bit of a posh Welsh rarebit. Incorporating the aforementioned ingredients, it works fantastically well as a savoury but also as a light lunch or supper and a great canapé idea for the festive season. How close this is to the original, I guess, we will never know.

Place the milk in a pan and bring to the boil. Add the Armagnac and stir in the brioche crumb. Cook for a minute until a thick-ish paste has formed and it comes away from the sides of the pan. Remove from the heat, allow to cool a little and then stir in 75g of the Roquefort, mixing until it’s fully incorporated.

Transfer the mix to a food processor and blend to a smooth paste. Add the egg yolks one at a time. Mix in the mustard and season to taste. Place in a container and put in the fridge until required.

Preheat the oven to 170˚C. Spread the mix on the bread slices. Bake in the oven for about five minutes, then finish under a hot grill until it just starts to bubble and looks lovely and golden.

Serve with the remaining Roquefort crumbled over the top, lightly dressed watercress and a few pickled shallot rings.

Bring all the ingredients except the shallot to the boil. Pour over the shallots, allow to cool and use as required.