On the table: Primeur 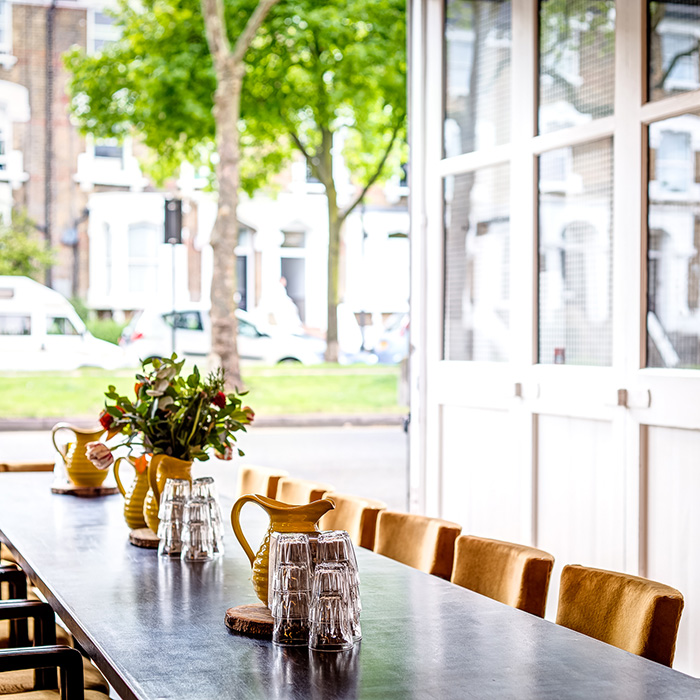 It’s a wonderful thing to walk into a restaurant and have the atmosphere hit you in the face like a blast of warm air. Which is what happened when a friend and I visited Primeur on a quiet residential street in Canonbury – a 20-minute walk from Higbury and Islington – last Thursday for dinner. I’d been before, back when it opened to much acclaim in 2014 and many had decided it was their new favourite neighbourhood eating place. On the first visit it was a sticky summer’s day and, being in a former garage, staff had wrenched the great sliding door back to let in great swathes of sunlight. It was all so pretty, and our food was perfectly nice, but it was quiet and I remember thinking I’d like to return for dinner to see if things would be different.

Primeur is owned by chefs and friends Jérémie Cometto-Lingenheim and David Gingell who, as well as having varied and impressive cooking CVs, used to hold “pavement parties” in Spitalfields. And on this second visit, I could see why those were successful. Walking in it was as if we had stepped into a romantic cubby hole, with people gazing at each other in a room decorated with flickering candles – most down to their wicks, so the light was properly twinkly – and straightforwardly with whitewashed walls, coats hanging up and a blackboard menu (this changes daily). I gather from a former colleague that the velvet mustard yellow armchairs were ex-Savoy Grill ones from the 1930s.

Being on the least exciting seats in the room – on high bar chairs, cut off from the kitchen by a large pillar – actually mattered little because I could still glimpse three chefs at work, and because sitting next to the kitchen means you get served first. Butter and bread (from Bridget Hugo of Bread Bread in south London) came out quickly – chewy sourdough with an essence of smoke in the crust.

Next, a rush of five plates. Something labelled simply as “tomatoes, crème fraiche” was just as lovely a way as you could want to eat tomatoes, and these were fresh, piquant, with a basil-y undertone and crème swirling around in their juices. Spears of asparagus were perfectly cooked and sweet, with none of that squish or hardness that I still manage to achieve so regularly at home, and with an interesting combination of things on top – we recognised miniscule pieces of chopped egg, pickles, tarragon and possibly parsley – lending the whole dish a winning sharpish sweetness.

I haven’t eaten enough sweetbreads yet to spot a good one, but here they were as fluffy and chewy as I suspect they should have been, and propped up by fresh green beans, mandolined red onions and some fine ham. It was good, but too rich to finish, meanwhile a dish entitled “ray wing, cuttlefish, lobster stock, lentils” seemed like something one might come across in a tiny French seaside town, and was filled with natural, comforting salty juices and silky chunks of cuttlefish.

We sailed through four slices of Featherblade steak, just seared and cooked enough to be coated brown but succulent and pink inside, and with it a variety of sweet, almost caramelised spring onions and their accompanying jus.

There was a great splodge of dark chocolate mousse – heinously rich – with crackly salted peanuts to round up, and a delectable sandwich of paper-thin shortbread with strawberries and vanilla cream.

Looking in to Primeur from the outside felt as if we might have been spying on a group of friends celebrating a birthday; on the inside it rather felt the same, except that there were brilliant staff who were always looking over us without us really realising. Next time I’ll bring a group of 20 and stay a long while.