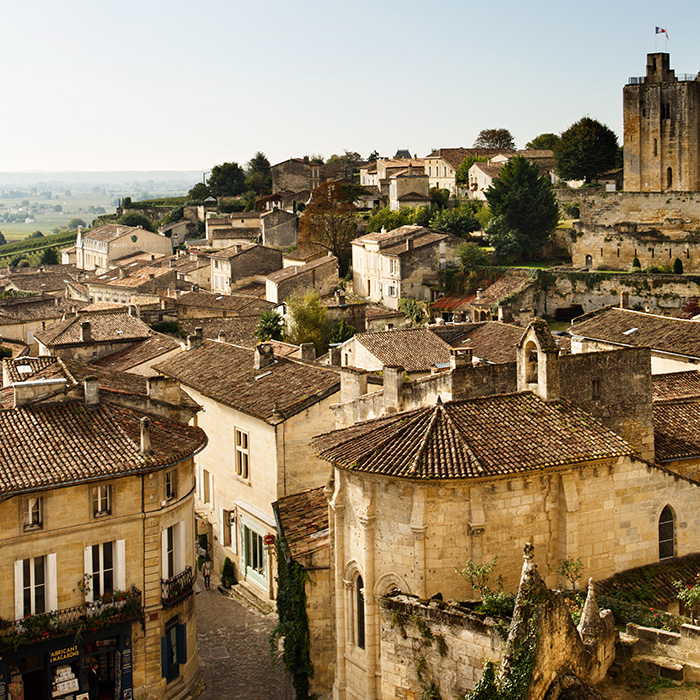 The town of St Emilion stands on a crest overlooking the wide vineyards of the Right Bank: the countryside here is considerably hillier than the Médoc and Graves districts of the Left Bank. Photograph: Jason Lowe

Following on from last month’s piece explaining the Left Bank, here we publish an excerpt from Exploring & Tasting Wine which introduces the Right Bank.

The wine-lands on the Right Bank of the broad Gironde estuary look to Libourne rather than Bordeaux as their capital, and have Merlot rather than Cabernet Sauvignon as their chief grape. Behind these simple facts is some venerable and tangled history, whose effects are still apparent today.

The Right Bank’s big names are St Emilion – by far the most productive district – and Pomerol. The prices and status of their top wines rival and sometimes exceed those of the Médoc, across the Gironde. One difference is in the size of the properties: St Emilion is a country of modest farms, not expansive estates as in the Médoc. Compare the two top St Emilion châteaux, Ch. Ausone at just seven hectares and Ch. Cheval Blanc at 36, with their Pauillac (Left Bank) counterparts: Ch. Latour has 65 hectares, Lafite 94, Mouton 79.

Pomerol’s top properties are even smaller: Pétrus is a seventh of the size of Lafite; Ch Le Pin is a mere two hectares, with a typical production of 600 12-bottle cases. Pomerol itself is a small place, its total area a sixth of that of St Emilion, and less than the smallest of the Médoc star communes, St Julien.

These differences stem from history but have real results today: Right Bank wines are more diverse; the noted ones are harder to find because they are in shorter supply; there is a more rapid rise (and fall) in status as small wine estates emerge into fashion or, sometimes, fall from favour.

The Merlot basis of the Right Bank wines makes them richer, deeper, fleshier and sometimes easier to like than the Cabernet Sauvignon-dominated Médocs. In general, they mature more quickly – but there are important exceptions. The aim of the winemaker can matter here as much as the grape varieties grown, and in Pomerol and St Emilion some châteaux aim for structure and tannin, and thus a long life. The Merlot can mask these attributes in youth, but time will show that they are there.

Most Right Bank wines – from St Emilion and its satellites (places that add St Emilion to their names), from Fronsac and Canon-Fronsac, from the Côtes of Castillon and Francs – are designed to mature in three to five years. These are not “investment” wines, but the enjoyable staples, stocking cellars across France and the wider world. However, the handful of top châteaux, a list recently augmented by fashionable “garagiste” wines made in minuscule amounts by star winemakers and consultants, sell for prices as high as any in Bordeaux.

In the upper range, St Emilion’s wines are classified according to quality and – unlike in the Médoc, where the list is frozen at what was decided in 1855 – the classification is regularly reappraised, wines are tasted, and châteaux are promoted and demoted. The top rank is Premier Grand Cru Classé A, with four estates (Angélus, Ausone, Cheval Blanc and Pavie); then 14 ditto Premier Grand Cru Classé B; and 64 Grands Crus Classés.

It is often thought that the term “Grand Cru” is part of the St Emilion classification; not so. Nor is it equal in status to the Grands Crus of Burgundy or Alsace. “AOC St Emilion Grand Cru” is simply another St Emilion appellation, albeit one that covers the same area. The 600 or so châteaux that use the term on their labels just have to produce wines with 0.5 percent more potential alcohol and a slightly lower yield than basic St Emilion. It would be more helpful if the wines were referred to as “St Emilion Supérieur” rather than “St Emilion Grand Cru”.

Want to know more? Explore Bordeaux through one of our events.