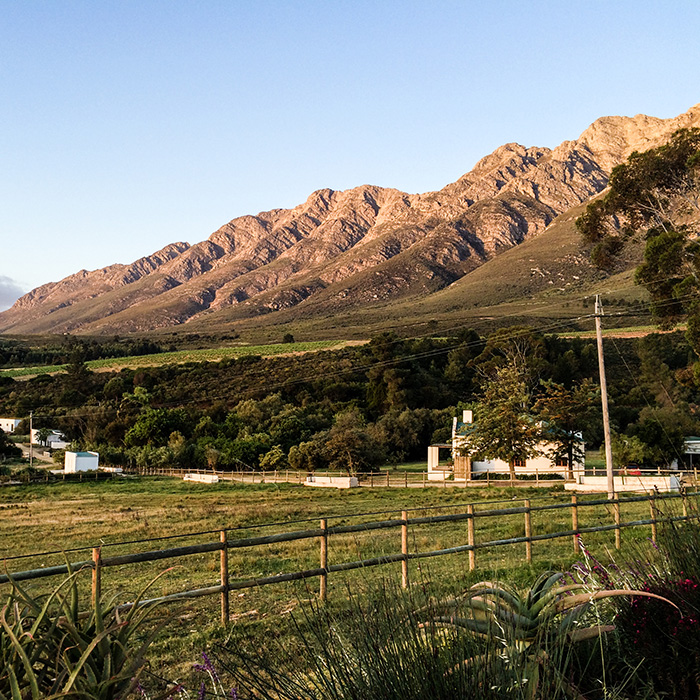 Sophie Thorpe’s South African adventure takes her to Fable Mountain Vineyards, and an encounter with the storybook charms – and serious wines – of Paul Nicholls and Rebecca Tanner.

Fable Mountain Vineyards is uniquely beautiful. Don’t tell anyone, but it might just be paradise. I visited at the very end of October last year, after a rather tumultuous journey – including a lengthy detour on an extremely narrow, winding, cliff-hugging lane – arriving embarrassingly late for the appointment I had made. I feared I was too late, and would be turned away to tackle the treacherous route again in reverse.

Luckily Paul Nicholls, his three children, the dogs, two zebra, a herd of Nguni cattle and a generous flock of sheep welcomed me in. Taking me to the balcony of their immaculate gravity-fed winery (his wife Rebecca’s work, he tells me), Paul poured me a glass of their exquisite rosé (2014 Belle Flower) – beautifully elegant, this delicate Provence-style rosé was suitably restorative. We sipped, swilled and spat over the side of the building (perhaps not a feature of most people’s ideas of heaven) as the mountains began to take on a glow that matched the wine in my glass.

A cynic might suggest the rosé tasted so good because it was the perfect wine for the moment, but I’ve tasted it before – when Paul and Rebecca, the husband-and-wife duo behind Fable wines, visited our Basingstoke office – and it tasted just as good. Even then, they managed to bring some of the Fable magic with them.

Previously known as Tulbagh Mountain Vineyards (and looked after by Chris and Andrea Mullineux), Paul and Rebecca arrived in 2009. The extraordinary property is located between Tulbagh and Wolsley: the valley feels tucked away, very separate to the cowboys of the Swartland (just to the east) and the establishment of Stellenbosch (south from here). It is wonderfully serene.

There is something rather storybook about their life – an utterly charming family settling into a remote farm with an intriguing array of wildlife – except they also happen to make properly serious (and delicious) wine. And they have an established name behind them: Charles Banks (of Screaming Eagle fame) is backing the project, having bought Fable in 2010.

As well as their rosé, they make a complex white blend that changes each year (the Jackal Bird), a red Rhône blend that accompanies a brai perfectly (Night Sky) and a truly enchanting Syrah – packed with juicy purity and the structure to age elegantly.

Even if you don’t buy into their story, you should be buying their wines. They’re serious, but also insanely drinkable. The couple have a policy that when they’re working on the final blend of a wine, they will take a bottle home for the evening. If they can’t finish it, they go back to the drawing board. They want you to be able to have more than one glass (responsibly, of course).

It’s all working so far, and they are proving that this remote and relatively unknown corner of the Cape is capable of producing fantastic wine.

One Response to “An enchanting tale”