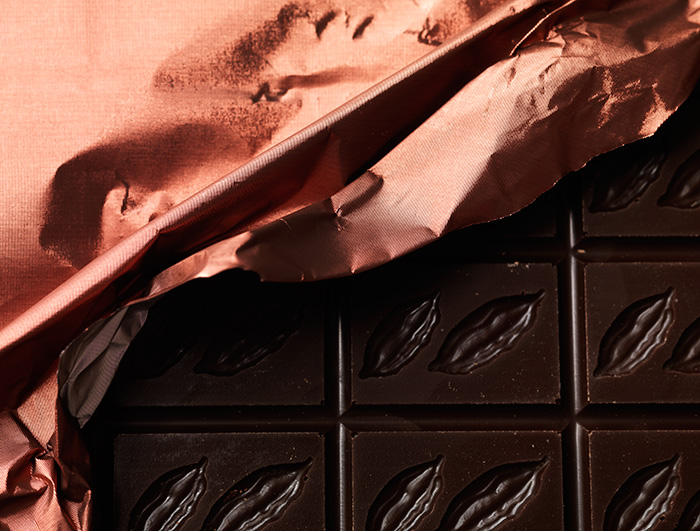 Amelia Rope is the dynamic founder of her eponymous range of luxury flavoured chocolate bars, just one of the artisanal British producers we are proud to collaborate with for our seasonal gift hampers. We caught up with her at to talk couverture, Colombia and kraft paper.

I set up my business by mistake. I always knew I’d be running my own business but not in chocolate, because I used to be quite overweight and thus chocolate was considered the enemy. As a child I was innovative: I sold my pony’s manure to get pocket money, and as soon as I passed my driving test I borrowed my mother’s car and set up a waitressing company.

I’m not trained in anything I do. I play and I create and I’m driven by my taste buds.

You have to look at what success is and how is it measured. To me, if I was turning over £1 million, I’d be successful. Other people say ‘look at what you’ve achieved’, but I’m constantly wanting to achieve something more. That’s probably the entrepreneurial blood.

Amelia Rope Chocolate was established in 2007. My first products were handmade truffles that I made in my kitchen, and crystallised rose petals, pansies and mint leaves that I dipped in chocolate and decorated with gold with silver leaf. The packaging design was down to a friend and entrepreneur called Pat Reeves, who sadly died last year. He was always telling me to do chocolate bars, and he offered to invest £60,000 of his own money but I kept refusing. Eventually he just placed an order for 1,000 bars. The kraft paper was his idea, but I wanted colour. It was a plain milk bar and I hand-signed, hand-wrapped, and hand-batch-numbered every single one in his sitting room, with the dog watching my every move.

I use single origin couverture from a few Latin American countries, and I’ve consequently fallen in love with that part of the world. I’m particularly proud of my Colombian single origin range as it’s from an area traditionally associated with cocaine, yet they’re now building a reputation for their cocoa which is very exciting.

The International Cocoa Organisation (ICCO) has classified a specific flavour note in chocolate called Fino de Aroma. Only six percent of the world’s chocolate contains this note, yet if Colombia develops its cocoa crops correctly, 100 percent of their beans can develop this flavour. The potential is substantial, but for export they know they’ve got to step the quality up, and that is where I’d like to get more involved.

I feel very honoured to be a part of Berry Bros. & Rudd’s Best of British hampers. This is my fourth year collaborating with them, and what I love about their company is its character. It’s never conformed: it’s done its own thing and hasn’t felt the need to rush ahead for the sake of it. I feel the same way. It’s not that I want to be a rebel; if I believe something’s right for me, then it’s right for me.

Amelia Rope’s chocolates feature in Berry Bros. & Rudd’s Champagne & Truffles gift and Le Grand Hamper. To find out more about this and our other seasonal food hampers, browse our Christmas 2015 offering on bbr.com.