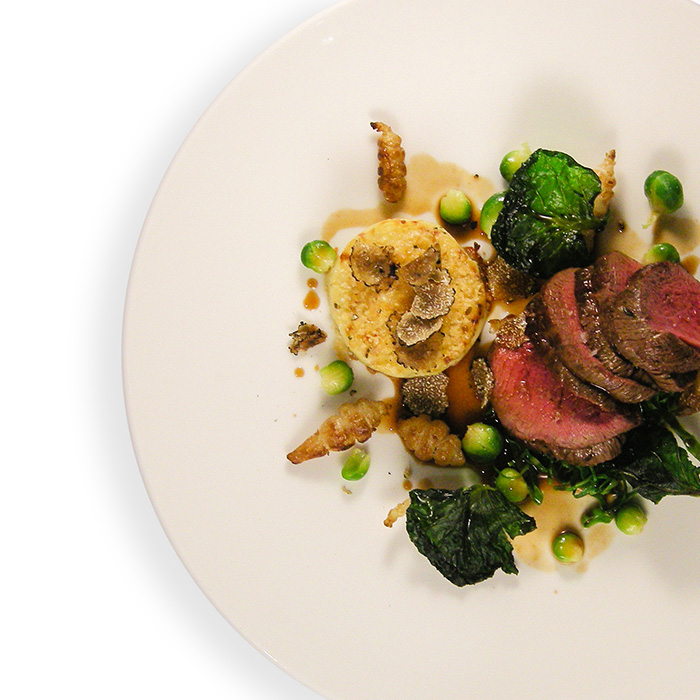 As the temperature finally drops, our Head Chef Stewart Turner suggests a decadent recipe to bolster against the winter weather, taking advantage once more of the truffle season. Demetri Walters MW completes the equation by recommending bottles that will stand up to Stewart’s indulgent combination of venison, truffle and cheese.

On the table: Macaroni cheese has to be the ultimate comfort food, which is so lovely and warming in the winter. It seems to be having a bit of a renaissance and is very much in vogue, although I still think we see it as a stand-alone item rather than an integral component to a dish. Here we have taken it to new heights with the addition of truffle and by partnering  it with venison – a dish we recently served at an Italian dinner, inspired by the requirement of something to match Barolo. One of the guests asked for the recipe after dinner, so I thought I’d share it a little more widely.

Venison and game in general is something I think we should eat more of: it’s so full of flavour, and, with very little fat, it’s a healthy alternative to other red meat. We use farmed venison as it tends to be a little more consistent; truly wild animals can be a little tough.

In the glass: Venison, with its gamey intensity, talks to me of earthier red wines, or at least wines where there is as much complexity and restraint as primary fruit. All manner of wines will make sense here: red Burgundy, Barolo/Barbaresco, Claret, and many a more restrained New World red.

Truffle might be the tricky ingredient here though, demanding a wine of power, breadth and texture. Mature Alsatian, German and Austrian Riesling fit the bill well, and they can still make sense when matched with venison and macaroni cheese. That said, many people will prefer a red wine here.

Allow the venison to come up to room temperature before cooking and season well with salt and pepper. Preheat the oven to 160°C. Heat a splash of oil in a heavy-based frying pan. Once the pan is hot, sear the venison for about a minute on each side until lovely and browned.  Add the thyme, garlic, and butter; baste the venison with the infused butter in the pan and pop it in the oven for about four to five minutes for medium-rare. Remove the meat from the oven and allow to rest in a warm place. Carve onto warmed plates and serve with the sauce, some buttered Brussels tops and the truffle macaroni cheese.

To start the sauce, roast the venison bones in a hot oven until they are lovely and brown. Drain off any fat. Heat a splash of olive oil in a heavy-based pan and sauté the vegetables and garlic until they are golden. Add the herbs, garlic, dried cèpes and spices, then cook for a further minute.

Pour in the red wine, port, and vinegar, then reduce to about 75ml. Add the stock and roasted bones, bring the sauce to a boil, and then reduce to a simmer. Cook until reduced by two thirds. Pass the reduced sauce through a fine strainer and set aside. When ready to serve bring to the boil and whisk in the jelly and butter.

Heat the oven to 180°C. Spread the chunks of bread over a baking sheet, drizzle with olive oil and season. Bake for six minutes until crisp, break or blitz into a rough crumb, set aside. Bring the milk to the boil with the cèpes, thyme, garlic and bay. Remove from the heat and leave to infuse for about half an hour, then pass through a fine sieve.

Melt the butter over a medium heat in a saucepan. Add the flour and stir to form a roux, cooking for a few minutes. Gradually whisk in the infused milk, a little at a time. Cook for 20 to 25 minutes over a gentle heat to a thickened and smooth sauce.

While the sauce is cooking out, cook the macaroni in a large saucepan of boiling salted water for eight to 10 minutes; drain well and set aside. Once the sauce has finished cooking, remove it from the heat and stir in all the Gruyère and half the Parmesan, grain mustard, truffle and oil, season to taste.

Stir the pasta into the sauce, then tip into a large ovenproof dish. Scatter over the breadcrumbs and remaining Parmesan, and then bake for 20 minutes until crisp and golden.