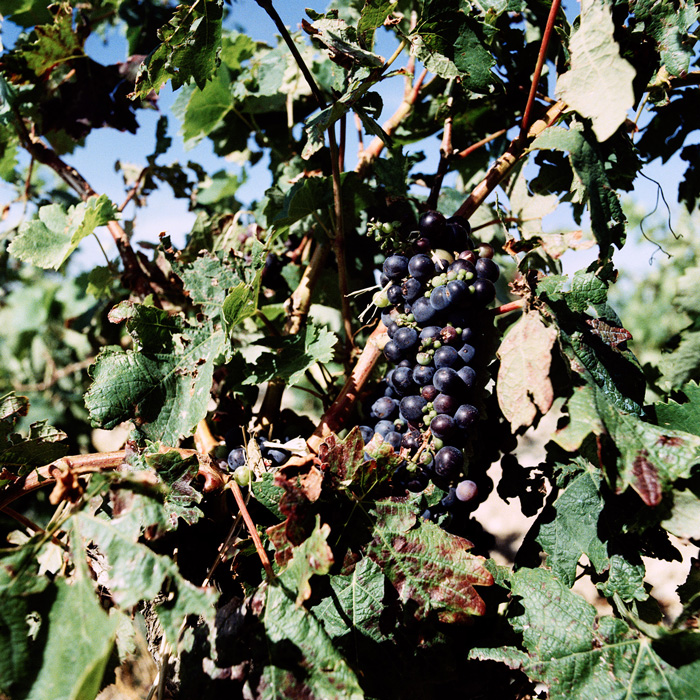 We do the most work in the countryside, rather than in the cellar. First we make an investigation of the area we work in; I travel a lot around Navarra, often to little villages looking for small plots of vines, talking to the owners. The selection of the grapes that have been tended by their father and grandfather, this is what La Calandria is about: exploring and finding an expression through old vines left to grow naturally.

Always respect the fruit. Our philosophy is simple: ‘just the fruit’. When you have a good ingredient to cook with it’s not so difficult, but with Garnacha we think it is a very fragile grape. It needs a good barrel with a wood that will respect the grape. This was another challenge for us, to find the right barrels for the Garnacha. We found our solution in France. They are fresh, 500-litre barrels – for a larger quantity of wine with less sulphites, and just a little hint of nuts and toast.

We taste all the time because the difference between one week and the next in barrel can be considerable. When you’re going to make the coupage, you must always keep some fruit to one side because if the barrel is very intense in flavour we can introduce fruit from the inox steel tank – which is not affected by the barrel flavour – to refine the coupage.

Seeking out these small plots, and the stories that come with them, started when Luis [Fernández] and I were childhood friends. Even then we learned about wine. Then when we grew up, my friends studied to be winemakers while I went to study fine arts, but later we began to talk about wine again. We were looking for Garnacha wines but we never found the Garnacha styles we love, so we decided to do it ourselves.

With the same grape we make three different wines: Cientruenos, Volandera and a rosé, Sonrojo. Each is made with a very different process: Cientruenos is a traditional method but without the barrel. The Sonrojo is a by-product of Cientruenos. Volandera, meanwhile, is quite different; we make this by carbonic maceration, which is unusual. You take the grapes with the branches and put everything in the inox tank, and leave it there for 10 to 12 days. Without oxygen, the grape does not decompose; instead the process of fermentation begins inside it. When we open the tank we take the juice – which contains sugar and alcohol – and we finish it like a white wine or a rosé to preserve the fruit.

The flip-top seal on the Volandera bottle represents an image of freshness. We see this wine as being like a fruity explosion. I prefer this to beer, and the design is intended to bring beer drinkers across to the world of wine. It’s a little bit fresher than a conventional red wine; you don’t need to drink it with a meal. I like to think you can drink it by the swimming pool.

Explore our full range of Spanish wine on bbr.com.