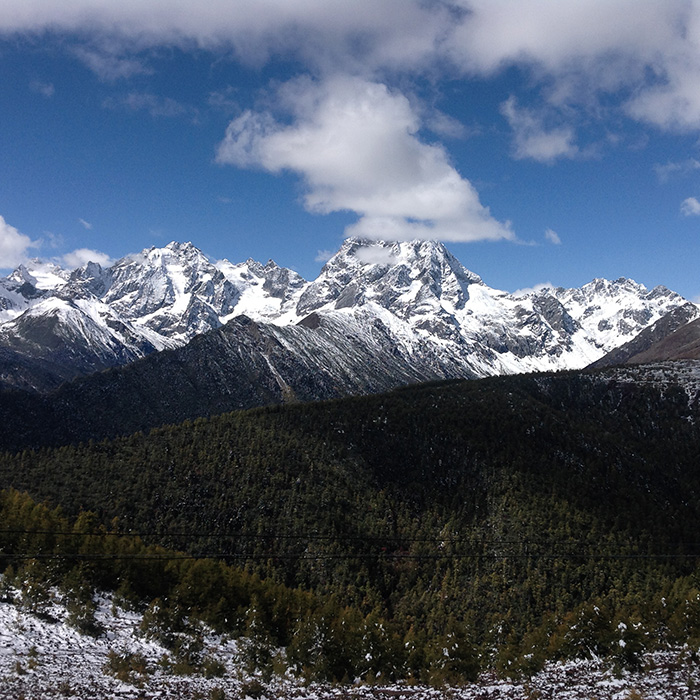 Our Burgundy Director – and intrepid explorer – Jasper Morris MW reports on a recent excursion to China’s Shangri-la, scouting out the potential of vineyards planted at dizzying heights in the Yunnan province.

Shangri-la, or Xiānggélǐlā, or Zhōngdiàn, or indeed Gyalthang in Tibetan, are all names for the same magical place in north-west Yunnan. It took me a while to appreciate it as I began to succumb to the effects of altitude sickness, flying in from Hong Kong (at sea-level) to Shangri-la (3300 metres above sea-level). It is partly the lack of oxygen, partly dehydration in this very atmosphere. The main symptom was a splitting headache, the solution some phials of Fufang Gaoshan Hongjingtian Koufuye, a local liquid which soon did the trick.

After a morning exploring the old town and enjoying a yak tenderloin at the Karma café, followed by a quiet evening at the amazing Songtsam hotel, we drove the following day to the extreme east of Dequen (pronounced deur-shin) county to go and see the vineyards. It is a 4.5-hour journey, mostly on good roads, through spectacular country including the White Horse pass which tops out at 4292 metres (around 14,000 feet).

We were delayed for 20 minutes almost at the very top by a road crew resurfacing the road – not bad at the height of the Matterhorn. This pass marks the top of the ridge between the Yangtze (here Jīnshā Jiāng) and Mekong (here Lancang) rivers – amazing to think that these two, so close together here, flow into the sea some 2,700 kilometres apart. We followed the Mekong river until turning up a side road alongside a sparkling tributary to reach the village of Adong in which LVMH have built their winery and lodge. 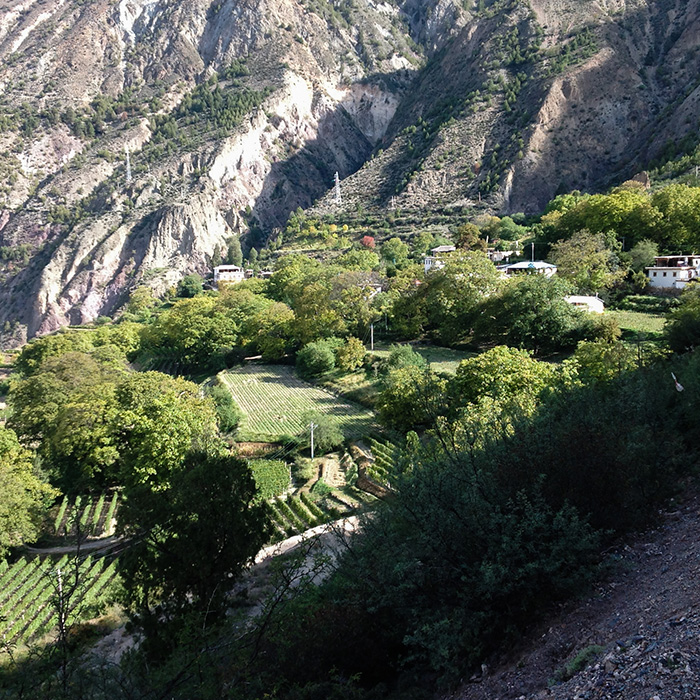 My first impressions were of the Upper Douro: granite and schist, steep river valleys, white houses perching where they can, small villages full of ambling animals (yaks, pigs, chickens, donkeys) and a poor but happy-looking local population, in this case Tibetans.

I joined the man in charge, Bordeaux-trained Maxence Doulou, and a small film crew (also French) for a wander round the vineyards of Adong. There were vineyards in this region in the 19th century, thanks to French missionaries, but the modern industry dates to 2002 with plantings of Cabernet. This is not a scenery of rolling vineyards, but mixed farming in small holdings, often on terraces. A typical holding would be about two ouvrées in Burgundy speak, less than a tenth of a hectare.

Fortunately I had gained my altitude ‘legs’ or lungs by now to profit from the unexpectedly sunny and indeed hot weather. We went for a scramble through the vines, while the film crew (Anne, Jean and Jean) flew their drone as well as photographing by more conventional means. The following morning we rose before dawn so as to film sunrise on the holy Meili Snow Mountain – not just a geographical feature but a Tibetan deity, much sought after by pilgrims.

Yaks are everywhere, both on the road (there was a troop of twenty or so ambling down the dual carriageway outside the government buildings en route to the airport on the last morning) and on the table. I particularly enjoyed spicy yak noodles and yak butter tea in Dequen, and a final meal of flying yak burger at the Flying Tigers Cafe back in Shangri-la.

And what of the wine? I shall prepare a more formal report on LVMH’s forthcoming Bordeaux blend, which is to be called Ao Yun (‘flying above the clouds’). The first vintage, 2013, is just in bottle and shows amazing promise. It is recognisably Cabernet, while not resembling the wines of any other region, New World or Old. Just possibly, we are on the verge of discovering a brand-new vinous Shangri-la.

One Response to “Experiments at altitude”