A hop to Hokkaido 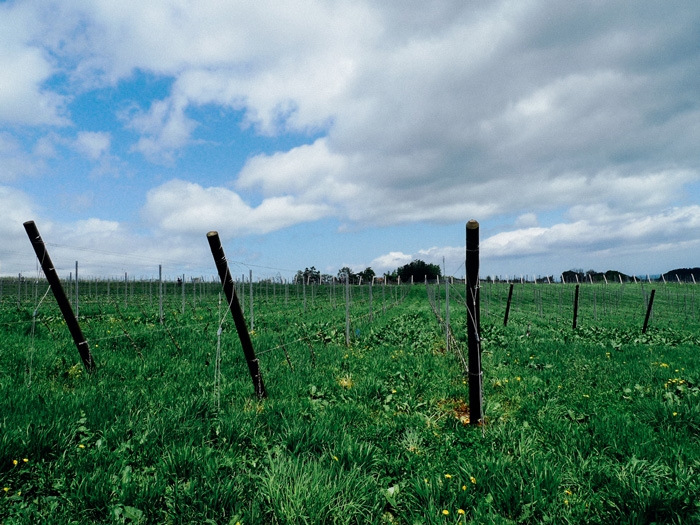 Following a recent trip to the high-rises of Tokyo, Jasper Morris MW – our Burgundy Director – journeyed north to the vineyards of Hokkaido; here he reports on the wines coming from this curious island.

My recent trip to Japan began with a concentrated few days promoting Burgundy in Tokyo, finishing with a superb sushi dinner on Saturday night; so I was not entirely looking forward to the early flight up to Hokkaido on the Sunday morning, but it was well worth it when I got there. We spent two excellent days visiting the vineyards and vignerons of Japan’s most northerly island.

I had already had a brief introduction to Japanese Pinot when the Berry Bros. & Rudd Tokyo team put on a blind tasting of two wines from Burgundy, two from New Zealand and two Japanese Pinots. One of the latter was easy to identify as the colour was markedly different, and I did in due course work out which of the other wines came from Japan, but congratulations to Funky Château for producing a very decent Pinot from the Nagano region. I did confuse one Burgundy with a New Zealand Pinot (the wonderful 2010 Surveyor Thomson, our favourite wine in the flight) but otherwise kept my reputation more or less intact.

In any case, I was impatient to head up to Hokkaido to see what Japan’s northernmost island can offer in the way of wine. I was accompanied by Chiba-san, one of our salesmen in Tokyo and a fanatical student of Japanese wine and food, and Miyuki Katori, a journalist with Japan’s Winart magazine and herself a great enthusiast for the burgeoning domestic wine production scene. Her knowledge of the local wine-production scene proved extremely useful.

What is amazing is that Hokkaido is firstly under heavy snow for four months of the year and only just warm enough through the summer for quality grape growing, and secondly on the same latitude as Châteauneuf-du-Pape. The wine industry here dates back to the 1980s, with some exciting wines on offer from grapes such as Kerner and Zweigelt, and some interesting Pinot pioneers.

Over dinner in Sapporo, journalist Miyuki Katori, my thoroughly clued-up guide for this trip, produced a range of bottles which she finds particularly interesting from Hokkaido, with one or two others from elsewhere in Japan.

Tasting with Katori-san provided me with valuable insights, as well as some much needed humility.it is easy to taste wines according to existing European ideas, but coming to such a different region, an open mind is needed. Indeed when tasting the Nana Tsu Mori Pinot in the aforementioned blind line-up in Tokyo, we dismissed it from serious consideration due to its light orange colour. However tasting at the winery, with the producer, we could understand what he is trying to achieve and realise that this is in fact a very good wine which proved to be a pleasure to revisit over dinner. I also found myself revising my preconceptions about ‘natural’ wines, especially those of the ‘orange’ variety. My notes on a few wines which stood out are below.

I was impressed by the drive of an energetic set of vignerons and the quality of many of the wines. A two-day visit, focussing on two sub regions, can only give a snapshot; and it remains pretty amazing that fine wine can be made at all in this relatively frozen corner of the globe. The wines which stood out as being remarkably successful were from such varieties as Kerner and Zweigelt, but there were Pinots which attracted too, without the feeling that Hokkaido is on the verge of becoming a significant international player for this grape. Several winemakers have aspirations for Chardonnay, but the more aromatic whites may prove more suitable.

Notes from the dinner table

2013 Hirakawa Farm Kerner: Made by Atsuo Hirakawa, a leading sommelier who has also worked in various French vineyards. Bright pure light colour, lovely soft floral notes, some roses, suggests a touch of sweetness. There may be a little residual sweetness but this is fundamentally dry wine in a deliciously perfumed style. Kerner stands up very nicely to wasabi by the way.

2012 Tap Kop Blanc: Made from Sauvignon Blanc in his Tap Kop vineyard in Mikasa by Kondo-san who is emerging as a cult Hokkaido producer. I disdained this at first thanks to its deep colour and somewhat oxidised nose. But it was from the start somewhat fresher on the palate, with good body and some charm, though I found it hard to get past the bouquet. Yet hours later the wine was improving still and the bouquet clearly freshening up.

Jobitaki Koshu, Sakai Winery, Yamagata: This is lightly spritzy, made with significant skin contact in the ‘orange wine’ style, though perhaps more pink grapefruit in colour. The Yamagata region provides good sugar levels and high acidity. Jobitaki is a local bird, similar to a robin (actually a daurian redstart) but with an orange rather than red breast and a beautiful voice. Similar to the wine in fact, which has much more character than most koshu. Katori-san recommends pork dishes alongside Koshu.

2013 Zweigeltrebe Cocoromi Series, Coco Farms & Winery: A rich deep red purple, with somewhat inky fruit on the nose but not too much so. There is a significant volume of fruit through the middle, destemmed style, without agressive tannins, the acidity is correct, and the wine overall attractive and balanced.

2009 Tsugane, Beau Paysage, La Montagne: A ‘natural’ merlot from Yamanashi prefecture and evidently a cult wine in Japan. Deep dark colour, a bit smudged rather than crystal clear, plenty of oak on the nose but clearly fruit weight to match. A very satisfying final wine for the evening.  “A glass of wine can change the world” the label tells us.