A tasting of Monprivato Barolo 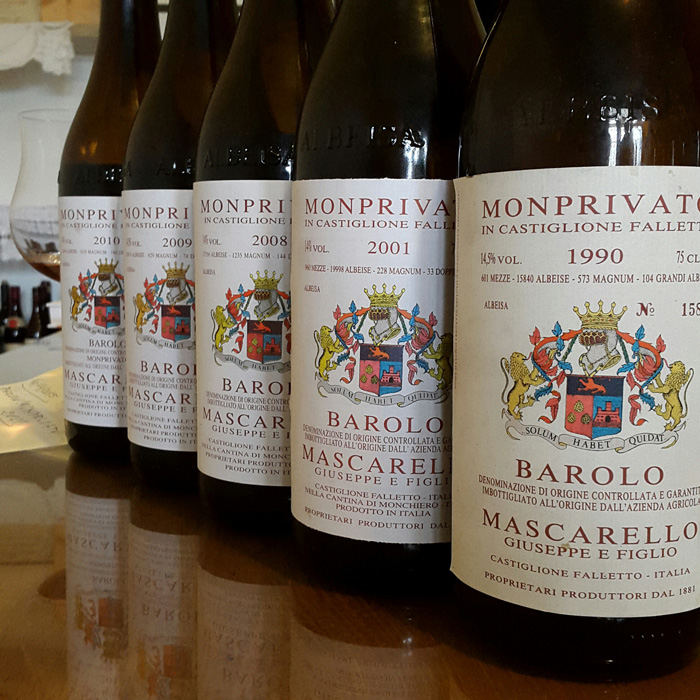 Monprivato is one of the Langhe’s, and indeed Barolo’s, most prized vineyards. Located in Castiglione Falletto, one of the core villages of the Barolo zone, whose history dates back to Otto III, Holy Roman Emperor, before passing to the Falletti family in 1225, who added their name to the village. It passed through the hands of the Marquis of Saluzzo, briefly belonged to the French and then to the House of Savoy until Italian reunification in 1861.

Geographically the village lies halfway between the soaring white talc ridge of Serralunga d’Alba, and the warming sandy, silt and marne slopes of Barolo lower down to the west. Consequently the village’s soils share aspects of both: blue and white marne along with a softening percentage of sand and clay; racy coupled with charm. Common to these ancient Helvetian or Serravallian era soils, Castiglione Falletto wines have a finezza born of good acidity and low pH juice, sinewy and discreet when young but capable of long ageing, compared to the more supple wines from the younger Tortonian soils of Verduno and La Morra.

Monprivato, as Mauro Mascarello refers to it (with an ‘n’), epitomises those refined, perfumed, Chambolle or Margaux-esque qualities. At around 288 metres above sea-level, the vineyard stretches along a spur, so presenting a uniform slope facing south/south-west. Compared to another famous Castiglione Falletto vineyard close by, Villero, Monprivato is composed of almost 100 percent calcium active white marne soils, along with a dusting of sand and clay; Villero meanwhile has more sand (giving more obvious fruit).

First bottled as a single-vineyard Barolo in 1970 by Mauro Mascarello of the historical family estate Giuseppe Mascarello e Figli, approximately half the 7.12-hectare site had been purchased by his visionary grandfather Maurizio in 1904. Mauro increased their holding to 6.25 hectares with subsequent purchases in 1982, 1986 and 1990. The remaining 0.87 hectares is owned by the church and rented out. So the Mascarello family effectively have the monopoly.

In exceptional vintages, the family release a Riserva ‘Cà d’Morissio’, using the prized Michet clone vines located at the end of the Monprivato ‘bench’. Recently I was very fortunate to be given the opportunity to taste a vertical of six vintages at the cantina: 1990, 2001, 2008, 2009, 2010 and including the current, about-to-be-bottled 2011 (along with the 2011 Santo Stefano and Villero), drawn from botte (barrel).

What was clear from the tasting was Monprivato’s emphatic, cool, mineral, presence, a thoroughbred racehorse of a wine, keeping pace with the vintage, rich with ribes fruit and structure, yet pulsating with energy. It is tricky to pin down in youth, being cagey and coy, but the sum of the parts is exhilarating, as long as you have the time to be patient.

2011 Monprivato: From wood (tasted alongside Villero and Santo Stefano), follows the vintage in being sunny but also salty, sinewy, compact with scented strawberry notes, and driven, hidden depths. More presence, firmer, more emphatic than the rose-petal Villero – it is profound. Tight weave, skeletal, muscular, almost iodine in its minerality, a salty streak, and a raspberry fragrant finish; one senses the presence but little more; impressive indeed… alla 2001?

2010 Monprivato: Over the past six years I’ve learnt that a year on from bottling is never the best time to judge a Barbaresco/Barolo. True to form then: immensely compact, closed, a glint of cassis and crunch, salty, some distinct rose-petal charm peeping out, along with raspberry zip and whiffs of the sea, full, plenty of dry extract, persistent; bodes very well. Drink from 2020.

2009 Monprivato: By comparison, an extra year in bottle has drawn the sumptuous 2009 out of its shell… or has it? A sea of pale brick/orange (alla Etna?), open, pulpy, strawberry, rose and sandalwood sfumatura (nuance); yet on the palate it tightens up, Monprivato-esque, racy poise, transparency, flowing, gorgeous purity, sultry charm, yet refreshing cassis acidity, along with tannic grip on the finish to remind us that there’s more to come. Drinking now but best from 2019.

2008 Monprivato: In the same mould as 2010 (‘classic’) yet more delicate, fine-boned (than muscular 2010), with refreshing cool raspberry and rose, spearmint focus, porcelain structure, serene, racy, backed by an immense structural mesh. Wild Amarena cherry stone-fruit backed by imposing structure for future development; this is almost Barbaresco-esque in perfume and prettiness. Drink from 2020 at the earliest; a keeper.

2001 Monprivato: 2001 is one of the finest vintages of recent years, yet one that stemmed from an irregular season (winter rain, warm and wet spring, then very cold snap, then dry, hot summer, a bit of rain in September, and an early-ish harvest), which Monprivato translated into a pale, camphor/strawberry/tea leaf; fragile yet glorious palate, packed with pretty, juicy cassis-fruit detail and ethereal crunch. This has a streak of cool cassis, yet is still so racy and energetic – spectacular (alla 2011?). Still in its secondary phase for another few years yet.

1990 Monprivato: This is proof that Monprivato does indeed get darker, and more magnificent with age; rich with quasi loganberry, brambly fruit, yet still fabulously limpid, refreshing, nervy, with a glacier-cherry fruit, emphatic pure hedonism. Will be even better tomorrow (alas when I’m not here!). Alla 2009?