A Burgundy dinner in the cellars 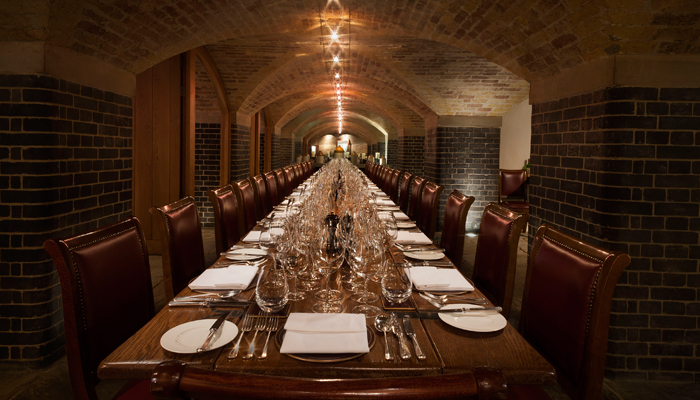 Berry Bros. & Rudd’s Sophie Nicoll takes a tour of Burgundy in the heart of St. James’s at one of our celebrated Wine School evenings.

Burgundy is a region of fascination as well as confusion and complexity for many wine lovers. When asked to help at our Wine School’s Tour of Burgundy dinner one cold evening in November, it offered great opportunity to taste an array of illustrious Premier and Grand Cru Burgundies that had developed with age.

The vintages on offer were stunning: 1983, 1995 and 2000 to the celebrated 2009, covering most famous villages as well as one or two lesser-knowns, we were promised an exquisite whistlestop tour of this French region.

Before our guests arrived – from afar as Russia – so began our wine preparation. Decanting is always a dilemma with very old wines as you lose some integrity of flavour due to oxidation, so we did this as late as possible to preserve delicacy and maintain fragrance. These surprisingly only had fine sediment, except the 1983, which required thorough double-decanting. But how were they going to taste with the food? First stop: two courses paired with white wines. 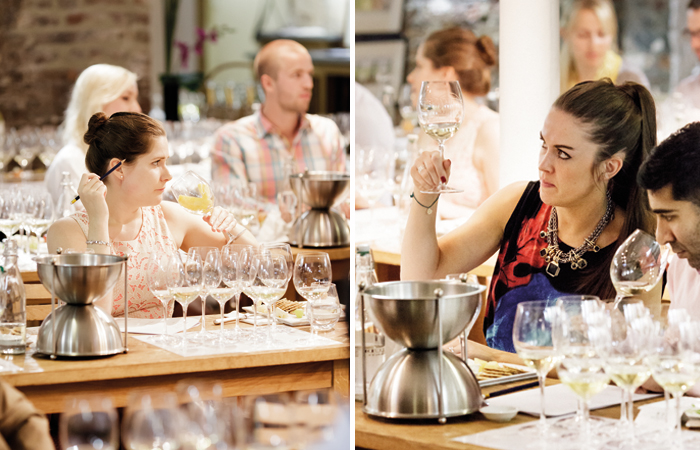 To start, a light and sweetish appetiser of hay-baked artichoke, apple and truffle pesto paired with 2006 St Aubin (1er Cru, Les Frionnes, Hubert Lamy): This aged white gave huge pleasure to the group and it showed well; an encouragement to age our whites for six or seven years. The second paired wine, a 2008 Puligny-Montrachet (Perrieres, 1er Cru, Domaine Jean-Louis Chavy), tasted fuller-bodied and richer on its own than with the food – an aperitif wine perhaps.

Onto a seafood dish and what an education in wine and food matching this was. A 2009 Chablis (Grand Cru, Les Clos, Domaine Pinson) while on its own was delightfully lean and light on the palate with classical marine notes and a crisp clean finish, just did not stand up to the weight and meatiness of the cornish crab and salmon ravioli with shellfish butter sauce. The alternative pairing, 2008 Clos Blanc de Vougeot (1er Cru, Domaine de la Vougeraie), toasty, lengthy and with refreshing minerality, just burst in the mouth when tried with the dish – the flavours melded together in a wonderfully velvet rich creaminess. Some were excited that they were tasting a white Vougeot for the first time (a relative rarity), and were not disappointed. Divine.

Onto the reds and the third course: partridge, served with game farce and celeriac tart, paired with a 2000 Volnay (Clos des Chenes, 1er Cru, Collection Bellenum) and 1997 Chambertin (Grand Cru, Collection Bellenum). The latter naturally had a huge following due to its vintage, yet surprisingly that most people voted for its younger compatriot: the softer, graceful Volnay started delicately and finished with intensity to match the soft lingering creaminess of the farce; velvety fruit complemented the delicate gamey flavours of the partridge.

Cheese was on the menu next, paired with 1995 Clos de Roche, in full prime and plenty of time to develop more, as well as 1983 Chambolle-Musigny: delicate and wise and could be enjoyed fully with the Beaufort, Morbier and Ami Du Chambertin, local cheeses of this region.

Those of you who’ve tried a supper in the Cellars will know it is difficult to leave at the end of the night – the conversation was full flowing and while we were satisfied from the deliciously fine food, the wines were hard to put down: the sheer variety of flavours, weights and levels of complexity of this region was profound, and any Chardonnay avoiders were soon converted! This dinner really was an education in how wine can taste so different with food, and with time in a glass.