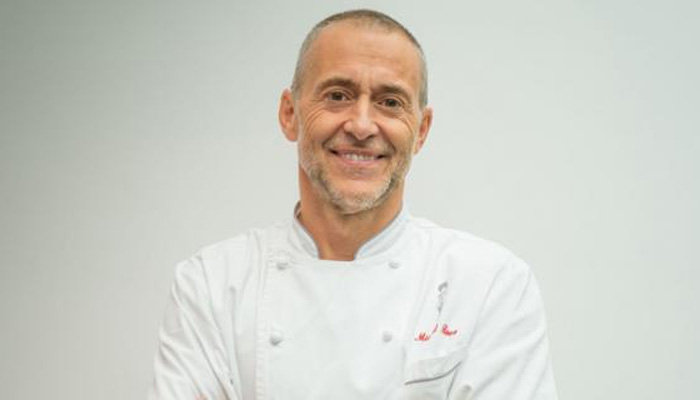 Last week I was lucky enough to attend the Fine and Rare Dinner in our Napoleon Cellar, cooked by guest chef Michel Roux Jr. I caught up with him before the dinner to talk though his menu and our wine matches, which you can view in this video, and below I share my detailed food and wine matching notes from the outstanding dinner.

As a grape variety, Chardonnay in its most natural state can be quite simple and basic but its plainness has a wonderful affinity with terroir and soils, particularly limestone. What makes Chardonnay intriguing, despite its fairly neutral character is how that influence of soils, climate, winemaking and wood can change this grape from something somewhat ‘beige’ into one of the greatest grape varieties in the world. Needless to say, its ability to pair with many dishes makes it all the more appealing.

Chardonnay’s fame is long established in sparkling wine production, particularly Champagne, as a vital ingredient for acidity, crispness, elegance and wonderfully balanced sparkle, even without the need for the other two permitted red grape varieties in Champagne production. We were treated to an example of this purely white Champagne known as Blanc de Blancs, from the Taittinger Champagne house as our event aperitif. Taittinger’s Comtes de Champagne Blanc de Blanc was first produced in 1952 as a finely aromatic, rich and creamy expression of the Chardonnay grape. The 2000 vintage accompanied by a selection of fine canapés including Blinis au Caviar, Choux au Comte and Tartelette de Volaille whetted ones appetite on the sloped floors of the St James’s Street store whilst the busy chef’s two floors below us prepared our feast.

After a brief introduction to the event from Mark Pardoe MW and opening words from Michel Roux Jr, we descended the cellar stairs to the long awaited dinner.

From a Chardonnay Champagne to the ultimate expression of bone dry Chardonnay, Le Montrachet Marquis de Laguiche from Domaine Joseph Drouhin, is a single Grand Cru Vineyard in the Côte de Beaune of Burgundy. Le Montrachet is a tiny area covering just less than 8 hectares of pristine, gently sloping vineyards (on Chardonnay’s beloved limestone) with dawn until dusk sunshine. A favourite quote of Jasper Morris MW are the words of Abbe Arnoux in 1728 who correctly describes Le Montrachet as ‘a wine that has qualities of which neither the Latin nor French language can explain the sweetness…I am not able to express the delicacy or excellence’. The majestic 2008 vintage we tasted echoes this greatness despite being almost impossible to describe in words.

This Fine and Rare dinner gave us all an opportunity to taste this great white wine and in three different ways; firstly on its own, then with two contrasting fish dishes designed to heighten certain aspects of the wines complex characteristics.

When the bottle was first poured I was determined to delve deep into the glass to name the exact aromas and flavours I found. Too often when I taste Le Montrachet do I find that my tasting notes are filled with words describing the intensity, the length, the structure, the balance, the power, the finish and its perfection etc., but very few sensory descriptions. It is very difficult. I am afraid that yet again I was overawed by the wine because more so than ever do I think that Le Montachet’s secret runs much deeper than minerals, orange flower, acacia or butter notes. By being almost impossible to describe, it sings of its terroir and of Le Montrachet. Its perfection becomes its tasting note.

For the first dish we wanted to look at the delicacy and texture of the wine matched with the light herbal butter sauce and relatively meaty T-Bone of Wild Turbot. The Montrachet balanced beautifully with the many complex, pretty characteristics which nestled in amongst the natural acidity. Other than perhaps a ballerina, little in life contains such haunting delicacy and finesse whilst possessing a huge, hidden strength. Never overpowering, never too much.

Next appealed to the wines depth of flavour with a dish of scallops and shrimps in a velvety lobster sauce. Rather than the lightness and restrain, this required the Montrachet to open and show its weight to contend with the richness and texture in the dish. There was less of a need for lightness and pretty characters and more for Montrachet’s famous buttery, silky palate.

Moving onwards to the nucleus of the dinner, the Filet de Bœuf, Beignets de Moelle et Purée de Truffes and a chance to taste a brace of ‘perfect’ 100/100 wines from the 1989 vintage. Chateau La Mission Haut Brion and Chateau Haut Brion share the same appellation of Pessac Leognan, the same gravel terrain that the Graves is famous for alongside both sharing a clay and sand subsoil. To continue, the winemaking team for both Le Mission Haut Brion and Haut Brion were the same and they are both owned by the family of American financier Clarence Dillon. Trying two such theoretically similar wines side by side with a single, blindingly brilliant dish was an honour. If I may explain further.

The roasted Galloway beef tasted as though it had been created for wines such as the two bottles before us. Beef is a glorious meat and deserves an equally brilliant wine match. Red Bordeaux works especially well with traditional recipes and for an event of this scale, it had to be Claret and it had to be the stuff of legends. 1989 Chateau La Mission Haut Brion is rich, oaky and complex with brooding red fruit that grips powerfully. These wines have a strong presence of terroir asserted by the darkest shade of chocolate and a distinctive smokiness that melds effortlessly with pure silk tannins. The wood gives foundations for long aging and in brief, this is without doubt a food friendly wine. 1989 Chateau Haut Brion captured my heart; how the aromatics tease the nose, the way it moves in the glass, the subtleties that add layer upon layer upon layer of beguiling complexity. The characteristics of cigar-box and the duo of red and black currant add lift above the richness of cassis and smoked spices.

Scientific research has shown that astringent wine and fatty meat are on opposite ends of a sensory spectrum and that the taste buds for a human palate love the sensation of opposites at the same time. That flavour and sensory impression of fat needs a balance of acidity and weight to cleanse the palate ready for the next mouthful. Despite the focus usually being on the more acclaimed wine in a side by side tasting, in this case a classified first growth (from the 1855 classification) against its equally illustrious, yet unclassified neighbour from across the street in suburban Bordeaux. The 1989 La Mission Haut Brion was more than an equal match.

The 1989 Chateau Haut Brion left my senses in awe and for many of the table was the wine of the night. This is of course subjective. By itself as a glass of wine, I will always long for 1989 Chateau Haut Brion but despite its incredible array of aromas and a notebook filled with ever changing descriptions, the opposition Chateau Mission Haut Brion for me took the gold as a match to the beef. Perhaps the extra level of wood, the resilient structure, the refreshing acidity and the savoury elements combined just that little bit better with the bone marrow, truffle and the exceptionally tender, juicy Galloway beef. The wine enhanced the dish which in turn improved the wine.

With a sweet tooth, I have a complete soft spot for pudding but when Roquefort tastes this good I would gladly never eat chocolate again in my life, especially if paired with the sweet 1975 Ch. Climens, a 1er Cru Classé from Barsac in Bordeaux. It can be fairly complex to match wine to a cheeseboard in but on this case when one is singled out it makes our job a little easier. Similar to the scientific study I mentioned earlier suggesting opposites attract, the rich salt tang of Roquefort and the honeyed sweetness of Sauternes make for a harmonious match made in heaven. Or in this case France.

To finish, a 1920 Bual Madeira from Blandy. Michel and I talked in detail about Madeira before the event, we both love the wines and advocate various styles in a food and wine matching capacity. Not enough people know of the delights of Madeira but in general, it has so many differing nuances from marmalade, caramel, roast coffee, sweet spice, nuts, tan leather and fresh wood plus a gloriously high acidity that doesn’t overwhelm food. The acidity is what cuts through fat, cream, spice, rich sauces and strong cheeses making it very food friendly. To pair with Michel’s chocolate macaroons, the 1920 had mellowed to roast spices, crushed nuts, dark chocolate and deep caramel and the acidity renewed the palate between bits and sips.

From a food and wine matching perspective, this event offered the essence of why food and wine belong together and the true benefits to considering flavours in wine almost as an extension to an ingredient list of a dish. This was simply the finest expressions of fine food tasting with fine wine matching that I have had the pleasure to be a part of.