Italy 2012 harvest reports, in the producer’s very own words 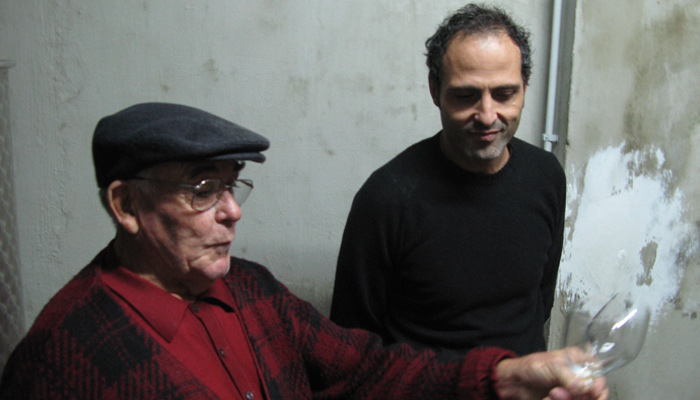 Harvest took place during the last week of October; it was important to pick after the October rains that rebalanced the fruit. It was a fairly dry year, with rain only in spring, and then in October on a couple of occasions, giving excellent, healthy fruit, with fairly high alcohols, yet with great depth too. I would say it was a ‘sontuosa’/sumptuous year.

For me 2012 was an excellent year. In the South (of Italy) farming organically is easy, but in 2012 it was even easier. Overall good weather conditions: a rainy april/spring – crucial for surviving the hot dry summer months. Thanks to dry, hot and frost free conditions we didn’t need to treat for the ‘tignola’, nor did we use any copper, with only one treatment in June of sulphur and bacillus for security. The harvest was tranquil thanks to fine weather until the end of November. Our Cirò Classico Superiore ‘Aris’being harvested at the end of Sept and fruit for the Riserva on 4th October: perfectly ripe, clean fruit. By comparison 2011 had been hotter at night and, without the spring rain, the vines had suffered from stress; strict selection was required to avoid desiccated fruit.

As with other regions the drought and summer heat limited the vine’s growth and reduced yield. Budding was disrupted by the previous year’s lack of rain yet nonetheless flowering and fruit-set occurred successfully. May to August was hot and dry, a problem for young vines yet positive in reducing the presence of pests. Our (Aglianico’s) deep roots, sensitive work of the soil, while paying attention to the health of the vine’s leaves (zero treatments that would have sapped the vines’ energy) delivered rich yet balanced fruit, with good tannin levels. The harvest was 12 days earlier than in 2011. Both years, 2011 and 2012, are excellent (for Aglianico del Vulture), coming after two wet years (2009 and 2010).

2012, the year to forget and hope it doesn’t repeat!  A very long hot summer (nothing compared to oz, but hot for here) Hottest in 50 years or so they say.  I have a feeling we have all got pushed into the next climate bracket.  Rains were along normal, a lot greener down here in spring than in the north of italy and i was hoping for a good year but i guess you cant be greedy (2009, 2010 and 2011 were all good).  So at the end of the days they wines look quite nice and have good acidity, not stewed or anything.  Good but not great.
Data di vendemmia: first Primitivo came in on 11th August.  Normally i would begin picking around 22-25th August, the earliest before last year was in 2008 when we started on the 18th august. 2012 and 2011?  Black and white: 2012 easier to drink early 2011 dark, closed firm, and looking very good.

The 2012 drought caused grave damage to Umbrian agriculture but rain across the Sagrantino zone at the end of July and of August created optimal conditions for quality wines. Sept sun sealing a fine year. The plants and fruit in perfect health, requiring no treatments. The quantity of fruit matched that of 2011 but less than preceeding years. Locals compare 2012 with 2007, another hot year; 2012 promises Sagrantino wines of great character and longevity. In summary: good alcohol levels, intense colours, clean aromas, great structure with ripe tannins, persistent and well balanced. 2012 may well live up to the phrase “nettare degli Dei”, ‘nectar of the gods’!

2012 was a regular season, with a hard winter and heavy snowfalls, a dry spring giving a poor fruit set/production. Despite a hot torrid August the vine continued to respire without sapping the fruit (as had happened in 2011 due to the hot winds). Harvest between the 1st of Sept and 1st Oct, giving ripe brown pips, the just amount of acidity, that should give gentle, well-balanced wines.

According to official records, 2012 is the second driest year since 1800! A dry winter, if damp spring, was compounded by no rain from May 25th until the first days of Sept. Fortunately the estate has a significant proportion of clay. Harvesting the estates 8 varieties (!) started with Syrah on 30 Aug and finished with Cabernet Sauvignon on the 25th Sept. Giving thick skinned berries, more structure than 2011 with good freshness and slightly lower alcohol. One for the cellar!

2012 climatically wasn’t one of the most balanced.A dry winter, punctured only by a snowfall in the Greve valley at the end of January. A damp spring, which unfortunately did not top up soil water reserves due to significant evaporation experienced during the same period (compared to winter). The wet, turbulent April/May conditions also interfering with flowering, resulting in a poor fruit set. Summer was dry with winds further leaching the soil. Young vines suffered in particular. We suffered less than in other zones due to Villa Calcinaia’s deep soils, with leaves being left to protect the fruit from the sun. Harvest took place between 30 August and 10 October. Sept was almost equatorial, with drizzle and warm temperatures allowing the vine to recover itself. The Sangiovese from our top vineyard, Vigna Bastignano, was harvested on 2nd October, with less obvious desiccation than in 2011; giving small tasty berries.The wines seem fresh and lively compared to 2011. Yields are down nearly 40%: ‘poco ma buono’ (little but good).

2012 produced 40% less grapes than 2011 and about 30% below 10 year average. Good thing is that the little grapes we had were very good. Very high sugar content as we had an extraordinarily dry summer with plenty of sun. So low acidity. I think 2012 will produce some great Franciacorta to be drunk relatively young. Not a good year to produce reserves or old millesimés as the low acidity will not grant the best ageing.

Earlier than normal start to the vegetative cycle due to high March temperatures. Cool and damp conditions during the flowering then reduced the crop by 10% and slowed the vines’ growth. August was hot and dry. At the end of October: bad weather with rain. The Kerner was harvested on the 8th Sept.The fruit harvested was clean with good acidity, and low pH. 2012 is a good year for whites and light reds; wines with freshness and intense aromas; compared with the more concentrated, riper 2011s.

A warm winter brought budding forward by 10/12 days vs. 2011. Then Easter brought 10 cool days that returned the vegetative cyle to its normal pattern. June brought peronospera/downy mildew reducing the crop by 5-10%; a further 2-3% by hail in July. A very hot and dry August threatened but fortunately our soil supported the vine. Harvest started on August 28 and ten days later we picked the fruit from the hill of Maser (for Colfondo and Millesimato). Little fruit this year, healthy and very concentrated, hence we should expect a more structured and aromatic wine than in 2011.

Damp spring delayed budding, very hot summer with torrid July and August, no rain from 22 July until 1st Sept. It then rained in September and throughout the harvest.Appassimento has gone well thanks to high humidy levels, while the ability to intervene/assist in controlling temperatures and humidity has helped avoid significant issues.The harvest of fruit destined for appassimento started on the 20th Sept, with the pressing taking place on 14th Dec. Quality of the fruit good but not excellent; 2011 was better.

After a cool and humid spring, June to August was dry and hot. End of August brief showers brought relief, while autumn rains allowed full ripeness to be achieved especially for the whites (Friulano, Ribolla Gialla, Sauvignon Blanc) and early ripening reds. My key grape Friulano was harvested between 7th and 20th Sept. Compared to 2011, the Friulano has a little more alcohol (+0.5% abv) and a little less acidity (-0.5 gr/l), from lower yields (less 23%), the tropical fruit mirroring that of 2003.