From ‘legendary’ to ‘double triumph’ – a decade of Ch. Haut-Bailly

A small gathering of some of the UK’s most renowned wine writers assembled in our Pickering Cellar to taste a vertical of 11 vintages of Ch. Haut-Bailly recently (4th October), where the general manager of the chateaux in Pessac-Léognan, Veronique Sanders, gently guided us through 11 vintages from 2000 to 2010.

You could hear a pin drop whilst we all tasted the first row of four vintages – 2000 to 2003 – but lively debate soon ensued between Steven Spurrier, Neal Martin, Anthony Rose, Jancis Robinson, Oz Clarke, Jamie Goode and Victoria Moore. I managed to get in on the tasting and the press were also joined by Berrys’ Sales and Marketing Director, Simon Staples (aka BigSitheWineGuy), and our Bordeaux Buyer, Max Lalondrelle.
Of the mythical 2000 vintage, initial comments were a little disappointing as it was felt the wine was fairly closed at the moment. Neal Martin, UK wine writer for Robert Parker and contributor to Wine-Journal on erobertparker.com, said: “This wine is showing very well but it’s not as intense as it was four or five years ago. As a vintage it has closed down a bit.”
Steven Spurrier, author and of Decanter fame, added: “I was expecting a little more robustness in this wine and then the 2001 came along and to me this is a superior wine.”
The 2001 vintage has been described as ‘Elegance’ by the chateaux and I personally felt it seem quite brooding with lots of promise, although I wasn’t confident to air my views in a room full of so many renowned experts. Simon Staples described it as “fresh” but with the “Haut-Bailly finesse”.

Oz Clarke, who needs no introduction, and Anthony Rose, Independent columnist, Decanter writer and member of The Wine Gang, were at odds over the 2002 vintage, Anthony found the wine lean and would drink it now and Oz loved the cedary characters and would keep it for future drinking. 2003 was described as ‘Atypical’ and I found it very giving on the nose and palate – lots of juicy fruits with a fresh finish. One to watch perhaps…

2004 generated even further debate as Veronique explained that Haut-Bailly’s practice in recent years had been to select better fruit but not less. They continue to push the quality but also the quantity as they don’t want to make less wine. Simon set the tone for this wine by announcing (bragging) he was delighted he had bought as much 2004 as he had done. Jamie Goode, Wine Anorak (not an insult, that’s his website name),  added: “It has a generosity of fruit but is rich and elegant, it’s lovely.”
Of the legendary 2005 Max said: “At this higher level this wine has different dimensions and layers of complexity. This is a very different wine at this stratospheric level.” 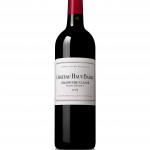 Simon harked back to his childhood, saying that Rowntree’s Fruit Gums (the red ones) reminded him of Haut-Bailly. Neal Martin brought as back to the present day by saying: “2006 is a dark horse and the great lost vintage of the last ten years; it’s a really good wine.”

Jancis Robinson MW, again no introduction needed, had remained uncharacteristically quiet until now but delighted Veronique by saying “Your 2008 is amazing, I think it’s fantastic.”

A smiling Veronique added: “It really shows what we want to achieve at Haut-Bailly. What we have tried to do in the last 10 years is keep the style but grow the density and keep the intensity. 2008 is not a big blockbuster, just very well-balanced.”

Oz pronounced the 2010 vintage as “pure” and Simon closed this fascinating tasting by saying how you could see how the wines had become more concentrated as we went through the vintages.

It was an honour to be part of this superb event. On a daily basis I share an office surrounded by passionate fine wine salesman who are always singing the praises of this chateaux. Big Si (Simon Staples) has said on a number of occasions how the wines have really come into their own in the last seven years and tasting 11 vintages really demonstrated this.