Manuel Marinacci – the face of things to come in Barbaresco?

Barbaresco has often struggled with its own identity. Half the size of the neighbouring Barolo zone just ten minutes down the road, references about it being Barolo’s ‘sister’, the ‘queen’ to Barolo’s ‘king’, has only served to heighten its complex of inferiority. As a result many of its producers over the past twenty years have sought extra concentration to give their wines a touch of the ‘tar’; to convince the journalists principally that they’re as BIG as the Barolo boys, sporting BIG alcohols, worthy of BIG points, and so BIG prices!

Yet so many, hunkered down in their bunkers, are totally missing the point about what is so precious about Barbaresco: its pure accessibility. Stylistically the wines of Barbaresco should offer a deliciously fine-boned counterpoint to the heavier Baroli; just as those of the Côtes de Beaune complement the Côtes de Nuits in Burgundy. The refreshing  influence of the river Tanaro running along its boundary; the way its slopes are open to the cooling Alpine air currents from the west; the way in which its lighter sandy tufo soils bring on a sweet ripeness all combine to produce an immensely elegant, good value wine with immediate charm but also longevity. Just look at the way Barbaresco outclassed Barolo in the hot 2007 vintage!

With the penny finally dropping that consumers, notably those outside the hitherto important American market, are fed up with gloopy, overly-extracted fruit and alcohol bombs of the recent past, it’s time to pack away those  rotofermentors, to sell off the French barriques, to pay off the winemaking consultant and to allow the Nebbiolo grape of Barbaresco (and of Barolo!) to convey its true character. 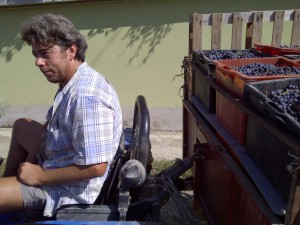 Manuel Marinacci is allowing his Nebbiolo fruit to do just that. He may not have a family dynasty of winemakers behind him (he started from nothing in 2002), nor does he reside in one of Barbaresco’s famous villages (San Rocco Seno d’Elvio is barely mentioned in any guide on Barbaresco), yet spells working in Barolo, Umbria , Diano and Champagne (one of which was a cooperative) taught him to respect what nature has given and to follow the traditional, well-worn path. Cement fermenting vats and large slavonian botte are all the tools he needs in making beautiful Barbaresco.

Try the fantastic 2007 vintage yourself at www.bbr.com!