News from the Langhe, Piedmont 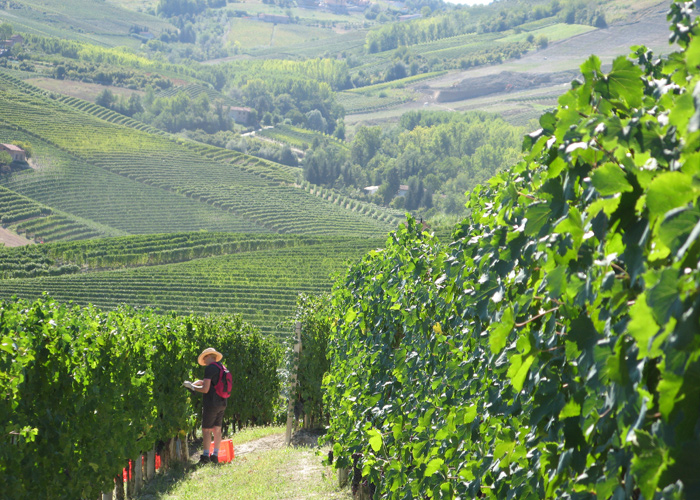 Swapping the cellars of No.3 St. James’s Street for the Langhe vineyards proved an effortless transition for my colleague Sue Wren as she joined the team at Cantina Mascarello Bartolo for three weeks of harvesting… and cleaning bottles this September/October. Here’s how she recalls the experience…

‘David Berry Green picked me up from Turin Airport on the 18th Sept, and from there we had an hour’s drive to the pretty village of Barolo,where I stayed for 3 weeks. My day starts with a 5 minute walk to the Cantina (Mascarello Bartolo) arriving every morning just before eight. From there we would be driven to the vineyard where we would pick grapes until midday. I was then taken back to the Cantina for a delicious lunch prepared by Maria Teresa’s mother. In the afternoons my time would be spent cleaning filled bottles ready for the labeling process: in total I estimate I cleaned over 3,000 bottles!

I had a great time, and the people were very friendly.’   (Sue Wren)

I would like to take the opportunity of thanking customers and colleagues for their support in making Berrys’ first ‘Grand Tour’ Italian Offer 2011 such a success last month; the high quality and value now being produced by Italy is justly being celebrated. The 25 or so producers who made it to One Great George Street all continue to speak of the professionalism not just of the Berrys’ team but particularly of the customers, and the way they went about approaching and tasting their wines. One of the great favourites on that September 8th night was Sara Carbone’s sensual 2007 Aglianico del Vulture ‘Stupor Mundi’, Basilicata, proving I hope that one of Southern Italy’s signature grape varieties ‘Aglianico’ is making a comeback, either as the minerally Taurasi or voluptuous Vulture… (by the way, there’s a tiny amount of 2005 Aglianico del Vulture ‘Stupor Mundi’, Carbone for sale!)

Indeed on the back of such a ringing endorsement I’ll be following up the September Grand Tour offer with a tour of Calabria, Basilicata, Puglia and Campania this autumn; notably to investigate Calabria’s Gaglioppo grape, as well as searching for some Puglian Negroamaro rosati and reds….so look out for my report in late November.

And later this month I head an hour or so up the autostrada to the Nebbiolo enclaves of Carema, Ghemme, Gattinara and Novara to gauge whether their porphyritic examples offer a quality and value that challenges that grown in neighbouring Langhe.