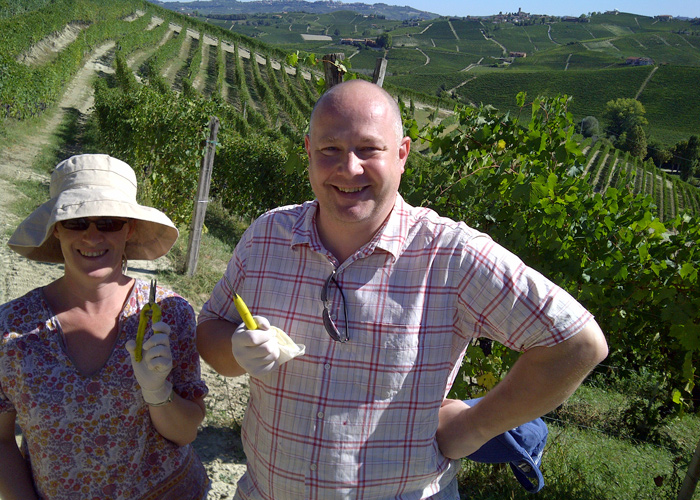 Trying to convey to Peter Turner, and his companion Christine Wild, in a couple of days what I’d learnt about buying over ten years was the task. I’d set out a programme that first addressed the context and, importantly, the culture of fine wine; on the second day one of understanding the raw material (the grapes) and then on final day that of assessing the finished product (the wine).

The Museum of Wine in Barolo was originally pencilled in but parked to one side once the option of catching up with Chiara Boschis harvesting her Cannubi vineyard was tabled. There we empathised with Chiara’s frustration at the brown sun-burnt and shrivelled character of some of her south-facing fruit. 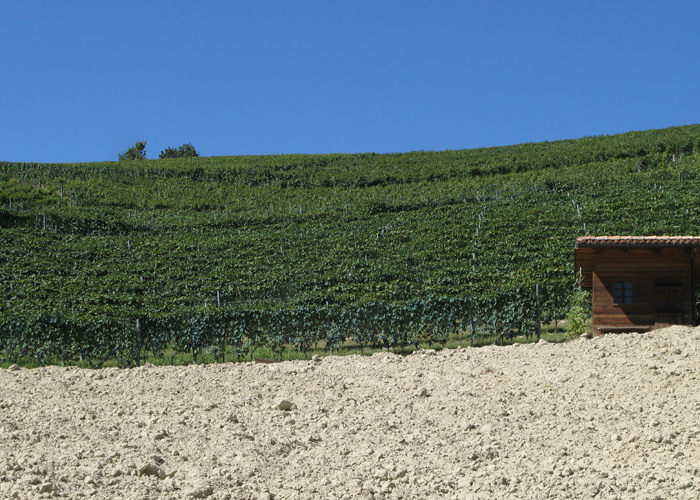 Harvesting Nebbiolo in Cantina Mascarello Bartolo’s San Lorenzo vineyard the next morning brought the changes in terroir home to Peter. Old vines, a different aspect, soil and mesoclimate painted another picture. Crucially it’s only by harvesting an entire plot, tasting the berries as one goes, that the impact of a variety of clones (compact Michet, fuller Lampia, ethereal Rose) can have on the final product (Barolo). Peter & Christine were able to witness their hard work being transformed into wine as they sampled the pale rose coloured juice that evening, amazed at its simple purity.

With the smell of grape must still lingering in his nostrils from the previous day, I set Peter the test of assessing a line-up of 24 Barbera d’Asti and Barbera d’Alba from the 2010, 2009 and 2008 vintages…blind! Peter admitted afterwards that he had not been familiar with ‘Barbera’ going into the tasting, so in assessing the wines had reverted to type in favouring those wines he felt had most ‘impact’, being darker, fuller, more extracted etc. The type of wine he was used to finding in a typical UK trade tasting… 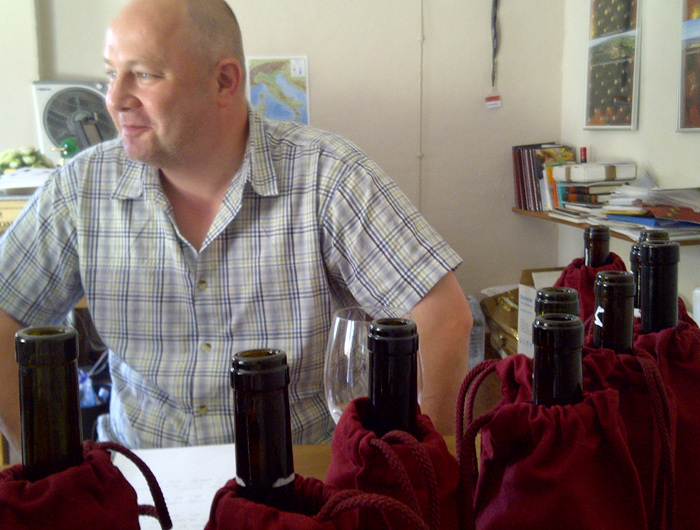 What was clear to the untrained palate was the difference in style and quality between Barbera d’Asti and Barbera d’Alba. In theory the Barbera around Asti should be softer, juicier, prettier even coming from warmer sandy sites, while those of Alba should be more muscular and minerally given the heavy marne soils of the Langhe. While this was almost the case in practice, the wines from Asti proved more variable in quality and style than their cousins. It seems that those of Asti were trying to make more of a statement, being richer, darker, more obviously alcoholic and oakier. The Alba wines instead showed more composure and cool elegance.

At the end of their stay, as I dropped the couple off in Torino, it was not clear whether I’d convinced Peter to switch employment from the charity sector to that of beverages, but certainly he’d picked up a few tips on how to improve his home-made cider!

Next week I’ll reporting from Barbaresco as Manuel Marinacci harvests his Nebbiolo fruit.