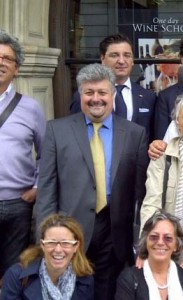 Those of you who know me, will know how much I like Italian wines. I find the range and diversity of aromas and flavours offered up by the wines of this great wine producing country to be endlessly fascinating and intriguing. As with France, where a love of the great wines of Bordeaux ultimately led me to a love of the great wines of Burgundy and the Rhone, so in Italy, my first love was the great Sangiovese wines of Tuscany that led me to Piedmont’s Nebbiolo. Nebbiolo is the grape variety of Italy’s King of wines, Barolo and its sister appellation Barbaresco.

Barolo is by far the larger of the two appellations and the one with the more diverse territorio (Italian for terroir). Very basically, there are two main soil types within Barolo, the Totonion sandy marl in the communes of Barolo, La Morra, Verduno etc. in the north of the region, where the wines are fragrant with a lightness of touch, sometimes described as feminine. The second type is Helvetian Sandstone clay which produce more backward, age-worthy, heavier wines in the communes of Monforte and Serralunga d’Alba in the south.

Nestling at the junction of these two soil types is the commune of Castiglione Falletto, which has a mixture of soils, leading to the production of amazingly complex wines which seem to have the best of both styles. Many great Baroli are made up from parcels of wine from different parts of the region, including the delicious wines from Mario Fontana, Bartolo Mascarello and Le Vigne from Sandrone. It can be argued, however that the most interesting wines are from single vineyards with great territorio. One of the best sites in Castiglione Falletto is the famous Monprivato vineyard, owned exclusively by Giuseppe Mascarello e Figlio. Every vintage of this great wine is something special, but the one I know best, having served it at a number of dinners in our Napoleon Cellar and Italian Wine Schools over the last five years, is the 2003. It’s probably fair to say that no two bottles of this great wine are quite the same, but every one is also superbly complex.

The thing that surprises most people on seeing this wine for the first time is its light colour, like great Burgundian Pinot Noir, Nebbiolo is naturaly light in colour, belying the depth and complexity to be found there.  Typically the initial aroma on opening the bottle is red summer fruits, strawberries, raspberries and occasionally redcurrants coming to mind. Further investigation reveals mint and coffee and sometimes a hint of tea as well. On the palate the red fruits are there again, but are reinforced by notes of grilled meat, herbs and dark chocolate. The wine has an amazing lightness of touch, considering the hot vintage that plagued Europe that year, and never fails to impress. There is a small amount of the 2003 still available, plus we also have stock of the magnificent 2006, a great age-worthy vintage for the cellar, and the beautifully supple 2007, which promises to be the new 2003.

All of the wines made by Mauro and Giuseppe Mascarello are excellent, not least the superb Barolo Santo Stefano di Perno, exclusive to BBR in the UK, that has a very distinctive style, typical of Monforte d’Alba, with amazing herbal notes and a succulent meatiness on the palate. Mirroring the Monprivato, the 2006 is the one for the cellar, while the 2007 will be almost irresistible from release.

Chris Pollington – Fine Wine Team.
Chris is a huge fan of Italian wines and is a food and wine matching aficionado.