A taxi journey through Artadi

One of the absolute highlights of my job is that I get the opportunity to meet some inspirational producers and taste their wines with them. A flying visit to Artadi at the beginning of September was one such moment. Late afternoon on Tuesday 6 September we flew to Bilbao, the closest airport for those travelling to Rioja. Due to a football match in Lagrono, we spent the evening in Bilbao itself. 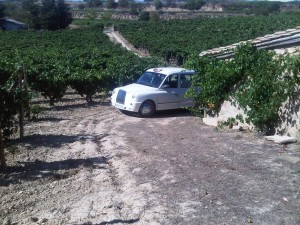 The 700 old city is a fusion of traditional Spanish and contemporary architecture and our hotel was located a stone’s throw away from the Guggenheim with its extraordinary structure. Early Wednesday morning we left behind the lush greenery of Bilbao to drive the two hours to Laguardia, home of the Artadi. We were greeted by Juan Carlos, who showed us around his state of the art winery and vineyards. The winery is extremely clean and tidy, with heavy investments made where it matters. The grapes are picked and transported in tiny trays to avoid damaging the fruit, all selection is done by hand and the vats are filled by gravity (avoiding pumps is much more gentle). Each vineyard parcel goes into its own separate cask (even for the wines that will not end up as single vineyard wines) allowing Juan Carlos to track the development of each of the parcels. In fact each vineyard parcel is aged each year in the same cask, meaning that each cask becomes a true reflection of each plot of vines and the wine absorbed by the cask in previous years is allowed to infuse its character on next year’s vintage. This sort of dedication and precision sums up the wine-making at Artadi.

A great surprise awaited us as we walked out of the winery. Juan Carlos’ choice of transport for a flying tour around the vineyards was a white London cab to drive us through the windy roads in the barren landscape of Rioja Alavesa. Only a drive through the vineyards can truly explain the vision that Juan Carlos has for Artadi. Most of Rioja is a blend of different vineyards and different areas. Driving through Rioja Alavesa with its patchwork of vineyards with different aspects, different heights and different micro-climates makes sense of Juan Carlos’ passion for making single vineyard wines and discovering the mystery that Tempranillo offers in varied micro-climates. For example, we drove past Valdeginas and la Poza, two long stretches of vineyards that are divided by a small stream. Valdeginas receives the afternoon sun and thus benefits from a slightly cooler micro-climate that intensifies its flavours. La Poza receives the midday sun and the grapes bathe in sunlight for most of the day with the warmth reflected in the final wines.

After our vineyard tour by London cab, we had the great privilege of tasting the 2009 and 2010 samples. 2009 had just been bottled and it was great to see how this wine had developed over the past year and compare this next to 2010. Juan Carlos also works in Alicante to produce a 100% Monastrell wine (El Seque) and in Navarra where he makes a 100% Grenache (Santa Cruz) to discover the best that these typical Spanish varieties can produce on the soil that suits them best. By choosing local grapes he maintains the personality of each wine and each wine area. These two wines were followed by Vinas de Gaias, followed by the three single vineyard wines Valdeparaiso, La Posa and El Carretil that Juan Carlos has  produced since 2009 and reflect his passion for parcel wine-making. It was fascinating to see how obvious the peculiarity of the different soils and micro-climates was in the wines. Valdeparaiso is lightest with crunchy red fruit, a touch of sweet spice and most approachable in youth. La Posa has more weight and is more intense with dark fruit. El Carretil combines the best of the two with ethereal aromatics, a real playfulness on the palate and a myriad of flavours. After the three single vineyard wines we tasted Pagos Viejos, a blend of the three vineyards, which stylistically has not changed since the production of the single vineyards except in number of bottles. We finished with the well-known El Pison, which famously received a perfect score for the 2004 vintage and has consistently been received well by the critics. Really profound, it was like a deep dark brooding beast with a finish that breathes a sense of eternity. It was fascinating to try the 2009 next to the 2010. 2010 is a lovely vintage for Artadi with full aromatics and deep intensity. The 2009s in comparison were more complete with extraordinary depth and complexity, but will take longer to reach their full potential than the 2010. The 2010s will provide a classic drinking case while waiting for the 2009s to mature.

After the tasting we jumped back into the white taxi and headed back into the vineyards to visit the famous El Pison vineyard. The 2.4 hectare walled vineyard is somehow reminiscent of DRC, with an ancient mill at its center. In the shade among the wines we enjoyed a picnic of eggs, roasted peppers and fresh tomatoes, traditional food of the harvesters. To drink we had the remnant of the wines from the tasting and it was the perfect finish to a spectacular visit.

One Response to “A taxi journey through Artadi”