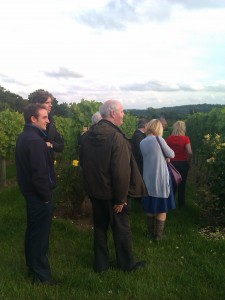 One of the areas of the wine world that is certainly on the up is English Sparkling Wine. The well known success of the big brands such as Nyetimber has had a knock on effect with vineyards appearing widely throughout the country. Hampshire is said to be one area where the climate and in particular the terroir (chalky sub-soil) are very similar to the Champagne region itself.

We were recently invited by local producer Jenkyn Place to visit their vineyard for a tour. As most of us had never visited an English vineyard, we gladly accepted the offer. A group of four from Berrys’ Bin End Shop in Basingstoke and four from our Sales and Service team headed to Jenkyn Place Vineyard in Bentley.

Upon arrival we were met by Simon Bladon who, along with his wife Rebecca, bought Jenkyn Place in 1997 – a majestic Grade II listed building dating from the 18th Century which was said to have been the building where the owner of White Star Lines, Harold Sanderson, learned of the sinking of the Titanic in 1912. Originally the area now under vine was leased to a farmer who grew hops, but due to the fact it was cheaper for the local breweries to import frozen hops from America, this proved unsustainable and the land was handed back to Simon in 2003. 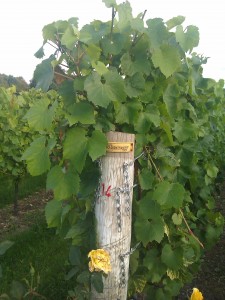 After some months trying to decide how to use the land, Simon tried some English sparkling wine (Nyetimber) for the first time at an event and decided to create a vineyard. Some 1700 vines were planted in 2004, with more following each year – in fact on our visit, we were shown an area which had just been newly planted.

There are two vineyards at Jenkyn Place, both are south facing on the aforementioned chalky sub-soil to give the grapes the best chance of ripening in what is a marginal climate. Accompanied by the almost compulsory vineyard dogs, we first visited the eastern vineyard, followed by the larger western one. In a rather novel touch, a rose is planted at the top of each row of vines, designating the variety planted. A yellow rose indicates a row of Chardonnay, pink for Pinot Meunier and red for Pinot Noir. Being over a month until harvest, the grapes were not yet ripe and still small, but Simon told us he is hopeful that if the weather does the right thing, a good crop can be expected.

With the tour done and dusted, we moved to the Summer House for the tasting. There will be a tasting room in due course, but this is still under construction – a sign of both the continuing expansion of the Vineyard and the English wine industry.

At present there is only one wine available – Jenkyn Place Brut 2007, a blend of 60% Chardonnay, 25% Pinot Noir and 15% Pinot Meunier. There will be a Rosé 2008 released next year, a sample of which was unfortunately not able to be brought out in time. The winemaking is done off-site, by another English sparkling wine success story – Ridgeview in Sussex. 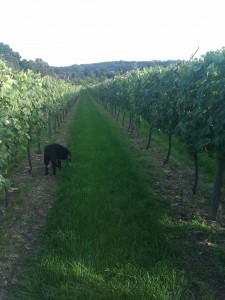 The wine was served at a perfect chilled temperature, pale gold in colour and with yeasty notes on the nose, which are often missing from sparkling wines outside of Champagne. The palate was pleasant – notes of green apple (to be expected from the high Chardonnay percentage) were perfectly in balance with the acidity level and a long and refreshing finish.

Overall, it was a very informative visit, certainly a good opportunity for those of us more used to vineyards abroad to see how things are done in England and we look forward to the arrival of the Rosé offering next year.