Last month,  in our Pickering Cellar saw one of the most scintillating tastings ever held in our premises. Proprietor of Château Climens Bérénice Lurton came over from Bordeaux and talked through a dazzling array of 12 vintages of her extraordinary Barsac wine, ranging from 2008 back to 1964. In all the themed tastings I have attended or hosted in Berrys’ Cellars I cannot recall an event which prompted so many comments and questions. Many of the guests expressed their delight at the end of the evening with several saying how they had never before realised the scale of the dedication involved in producing top-class Sauternes. It was not only highly enjoyable but also a real education! 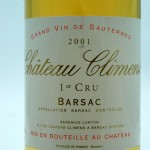 Bérénice conveyed, with a beguiling combination of charm and erudition, the philosophy of the family-run estate, seeking to create wines which intrinsically reflect the terroir from which they are produced, and the desire of Climens to produce, above all, wines of ethereal elegance and finesse rather than sweet wines of power and weight.

The wines tasted were:

Of course it was a marvellous treat to taste the highly-reputed great vintages such as 2007 and 1990, along with the mythical 2001, but for me one of the most rewarding pleasures was to taste the so-called lesser years, especially the cooler vintages of 2002 and 2004, which yielded wines of sublime elegance and class, eminently drinkable now and destined to please for years to come.  My personal favourite was the 1988, amazingly backward and reserved, the least opulent of the Holy Trinity of great years from 1988-1990, but a wine of wonderful balance, great restraint and laden with promise for years to come, long into the future. Interestingly the great 2001, given a perfect score of 100 points by Robert Parker, is only just beginning to emerge from its shell after being closed up for years. It needs time to blossom fully but all the ingredients are clearly there for a monumental wine which will comfortably outlive all of those who attended the tasting, unless it can be shown, as many of us believe,  that regular consumption of great sweet wine such as this promotes human longevity! It was also fascinating to see how the wines moved into a different state of maturity once they got beyond 30 years of age, with the floral, fruit characteristics becoming more muted in favour of aromas of dried fruits, orange peel, marmalade and coconut. The 1976 remained amazingly fresh, while the 1964 had clearly moved into a comfortable middle-age.

Our sincere thanks to Bérénice for a tasting tour-de-force, and a great experience for all those who attended.