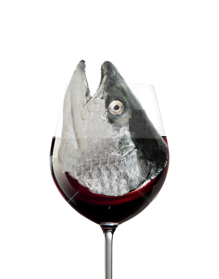 On 20th August we blogged about latest Japanese research that seemingly proved that it’s the iron content in wine, rather than its colour, that causes the problems with fish. On Monday night, at our Fine Wine with Fish courses, we put that theory to the test. You can download a full report about the evening, but below we show the results of our experiment.

With three sets of dishes to try, each paired with 2 wines, this is what we found:

Plate 1: Sea Bass & Tuna Sashimi; Seared Scallops with Creamed Cauliflower, Caper & White Raisin Dressing
Wine 1: 2008 Chablis, Vaillons, 1er Cru, Séguinot Bordet
(Chalky Kimmeridgean Clay, this wine was selected because of chlorosis)
Wine 2: 2006 Corton Charlemagne, Louis Jadot
(Rich red soils with chalk, clay and iron deposits)
The wines showed really good typicity: the Chablis was classically crisp and stony with steely acidity; the Corton was rounder, riper, less crisp and more richness and typical Corton minerality. Of the two wines, the Chablis worked the best with the sashimi especially the sea bass, and the fish egg garnish. The tuna sashimi overpowered it and the weight of the Corton proved to be the better match. With the hot scallops there was no competition: the Corton was head and shoulders the best, a really good complex match, complemented beautifully by chef’s caper and white raisin dressing.

Plate 2: Salmon Sashimi; Pave of Sea Bass, Pine Nut Crust & Sauce Lie de Vin
Wine 3: 2007 Chambolle Musigny, Domaine J-F Mugnier
(Marl soil)
Wine 4: 2006 Pommard, Clos des Epeneaux, 1er Cru, Domaine du Comte Armand
(Marl soil with iron content)
A really contrasting wine pair. Mugnier’s Chambolle was light, elegant and perfumed and ever so drinkable. The Pommard was sturdy, brooding and tannically-structured. This pairing held up the Japanese research. The iron-free Chambolle was the star of the evening; it was great with the salmon sashimi (as was wine 2, the Corton Charlemagne) but with the sea bass pave, it was sublime. The iron-richer Pommard was blown out of the water, paired with the salmon sashimi we got a bitter angular finish, and it was poor with the sea bass.

Plate 3: Prawn & Squid Saffron Risotto
Wine 5: 2006 La Montesa, Herencia Remondo, Crianza, Bodegas Palacios Remondo
(Clay, Baja)
Wine 6: 2000 Viña Ardanza, Reserva La Rioja Alta
(Chalk soil)
With its Mediterranean theme, we expected our third pairing to shine – it didn’t! An interesting pair of wines, the Ardanza Reserva showed very well, with lovely plum fruit encased in vanilla-rich American oak, against the Baja wine, with its higher proportion of Garnacha, showing through as a weightier with less tannins and a spicier peppery mid-palate. Neither wine starred: the Ardanza had the right flavour but was too tannic for the dish and we all wished we had some lamb chops on our plates. The Montesa had far too much weight and the delicious risotto was overpowered by it.

Our star wines of the night were the Chambolle (wine 3) and the Corton (wine 2). Both were excellent, with the Corton just winning.

So, do we agree with the Japanese research? No, not really. It would seem that so long as the wine begins with the letter C it was a great fish match, but, joking aside, we didn’t experience the horrid fishy aftertaste with the iron-rich wines. Weight and tannin were the elements we found needed to be considered, which bears out the traditional theory rather than the new one. It’s true we didn’t just stick to raw fish, and the wines were very different with the cooked dishes, but we concluded that the horrid fishy aftertaste may be unique to Japanese palates.

I may be proved wrong, as our intrepid experimenters have been asked to report back on their home fish and red wine matching. We tasted their homework, the 2007 Nolan Cabernet Sauvignon, before the end of the night. It’s a good example of South Eastern Australian Cabernet, full-bodied with ripe blackcurrant fruit, hints of mint and eucalyptus, and lots of ripe tannins. And we can testify to the fact that it tasted disgusting with the nibble of smoked salmon we tried with it.

So, here’s hoping they share their findings, and you do too…

3 Responses to “Red wine with fish experiment – the results”