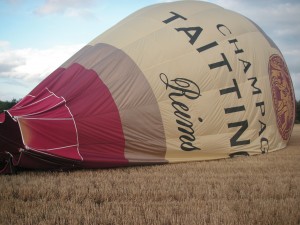 The idea was as immediately appealing as it was self-evidently indulgent, namely to conduct an ‘experiment’ to assess the on-going impact of altitude on the taste and flavour of Champagne. And we are not talking 35, 000 feet here, and the effects of cabin pressure and recycled air of a dubious nature. On the contrary, we are to be in a hot air balloon, owned, piloted and serviced by Champagne Taittinger. And the Champagne du choix is, of course, to be Taittinger’s deluxe cuvée, Comtes de Champagne, the gloriously expensive Blanc de Blancs which must rank as one of, if not the, finest of all of the Chardonnay-only Champagnes in the world. Or out of this world.

Or nearly out of it, as the weather only permits us to ease up to a gentle 5,000 ft, the tapestries of summer corn fields and even the lapidary shadows of the fine stone building of the Cotswolds still clearly etched below. If one is 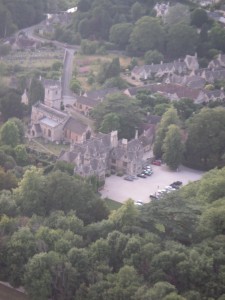 do something properly, one must do it in style, to paraphrase Mr Philip Tuck MW, our host and Sales Director of Hatch Mansfield, the UK agents of Taittinger. So we reconnoitre on the lawn of the elegant Bibury Court Country House (right), the vanguard of a weekend wedding party assembling to witness our departure, somewhat bemused. The other occupant of the disarmingly small basket, apart of course from Steve the pilot (should that be navigator?) is Essi Avellan MW, the well-know Finnish Champagne expert and writer. It was all her idea. A good idea. And I was just there for the ride, I guess.

The Taittinger livery on the golden balloon is fired up so promptly that we scarcely have time to taste the Comtes De Champagne on the ground. Thought so, impressive; rich, creamy, long….. the 1998 vintage. I have always thought this vintage a little under-rated, especially next to the rather unpredictable 1996 and the vastly over-rated millennium wines; this opinion will only rise and rise over the next half an hour, in a slow, ethereal, dreamy and altogether forgivable manner.

The ascent is lazy; the occasional blast of encouragement for the balloon the only thing to be heard up here, the whiff of paraffin now and again interrupting the reverie. The balancing of glass, notebook and camera requires no small measure of prestidigitation, however. We wonder at the peaceful atmosphere, the gentle colours of nature’s carpet below and an overwhelming sense of calm. Bottles are opened at 2,500 ft and 5,400 feet. None for Steve 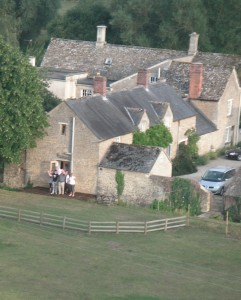 however, and nowhere (apart from everywhere) to spit. I am sure that I would have waxed far too lyrically into my notebook had I been able to work out how to write in addition to everything else. Too much to take in and admire, I decide….. too much left in the bottle. Not for long. Steve tracks our progress on a computerised Ordinance Survey map, its pages punctuated by black crosses. A black cross indicates an unfriendly farmer. Clive, far below struggles to find roads to track us in the Land Rover and then, as we descend, drives up to a farmer on his tractor and offers, as a gentle bribe, a bottle of Taittinger. A friendly farmer hopefully, even though his gift is merely the Brut Non Vintage. We are permitted to land (right). Large dogs bound up and it soon becomes obvious that the field has been spread with the most natural of all fertilizers. Quite recently.

Nothing dampens the mood, however. And yes, I almost forgot…… what about the results of this invaluable gustatory experiment? Well, amazingly, as the balloon rose, so, apparently, did the levels of acidity and the mineral core, the skeletal essence of the wine became more evident. The dosage seemed less obvious, the generous brioche and patisserie notes, in themselves the product of autolytic ageing, seemed less marked. The wine deceived to acquire youth and assumed a rather serious demeanour, the notes less of honey and vanillin, more of citric fruits, oyster shell and summer flowers. 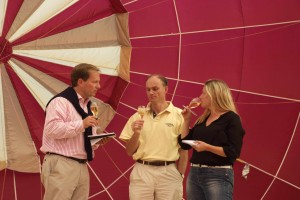 Dorian Gray in the sky, the wine getting younger, the bubbles bigger, the trappings of expensive aging less obvious as the air became rarefied and thinner…..only the tasters getting older as they hoped for their state of suspended animation to persist. It didn’t . It doesn’t. And back at Bibury Court the Champagne tasted just as it had done an hour earlier, as if the interim experience had never happened. In all probability we shall not be presenting our magnificently counter-intuitive findings to the Comité Interprofessionel du Vin de Champagne, but all three participants were agreed in their observations and, I for one, am more than happy to repeat the exercise next year to establish if our results were, in point of fact, vintage specific……