On becoming a ‘local’ 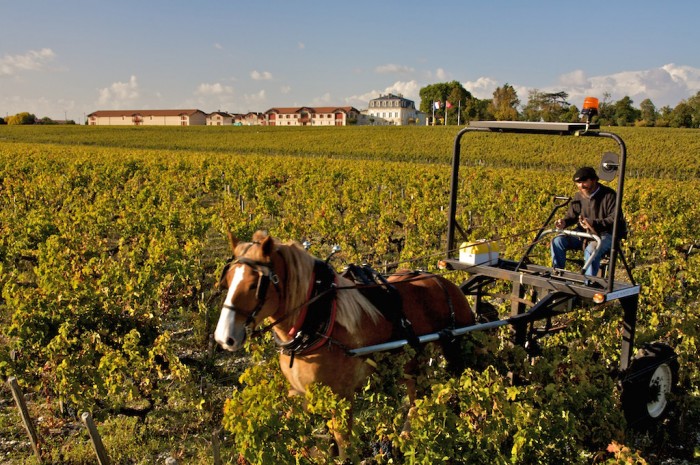 Horse tilling the vineyards with their own home made horse carriage at Chateau Pontet-Canet, Pauillac, Bordeaux

Right, before I start recounting the details of an epic 10 vintage Pontet-Canet Dinner last night, I thought it best to update you on my progress; Without doubt the best and cheapest tourist attraction in HK is the Star Ferry, and in particular the trip from the island (Wan Chai or Central) to Kowloon. At night this trip really comes alive, as you marvel at the neon clad, skyscraper jungle that is Hong Kong island’s skyline (above…picture not taken by me!) All for under fifty pence… cheap as chips! The variety of food in HK is incredible, whether you like your Tapas or Michelin Starred modern French. You can spend as much or as little as you want, and for me, engrossing myself in the local grub is what it is all about.

My use of chopsticks is getting better by the day (it needed to!) and I’m now regularly enjoying such treats as Chickens’ Feet, ducks’ tongues and frogs’ glands! In seriousness the local Cantonese cuisine is just amazing, with so many different textures and flavours that I’m just not used to. Hence the new tyre round my belly! The Staff Yum Cha Lunches are a highlight of the week, though my colleagues Jenny Wee and Debbie Yeung still have to tell me exactly what I am eating.

Probably the most memorable night so far has to be a trip to Chung King Mansion (via the ferry of course) in Kowloon. Now this is an intimidating place to say the least, famous in these parts for it’s hedonistic mix of traders, cheap hostels and an abundance of little restaurants hidden away in this cement jungle. Not the kind of place a slip of a lad from the Home Counties goes on his own, so fortunately I had BBR HK’s own “Phil Mitchell”, Mark Arrowsmith, (a local in this part of town), on hand to guide us to the third floor, for a feed at his favourite curry house!!! Now we weren’t shy with ordering and it was all for under ten pounds each and by gee it was the best curry I have had for a while! After that we whisked our way through the market stalls and fake Rolexs on Temple Street (think an east end market on steroids!) and into the strangest Karaoke Bar I have ever been to. I cannot quit explain, but the locals were as nice as pie, incredibly friendly, and boy did they like to sing. Coupled with a gentleman in sequin blazer, tinkling the ivories behind the performer, this made the X factor auditions look tame. A great night and I am plucking up the courage to head back, get on stage and bring the house down with a bit of “Show me the way to Amarillo”.

This really is just the start of what life is like here, crazy fascinating and a place that is begging for you to scratch underneath the surface!

Now let’s get serious and talk about just how amazing our dinner (at H One in the IFC Tower) with the very humble Alfred Tesseron (Owner of Ch. Pontet-Canet) was. I say humble, as it doesn’t need me to point out just what an incredible job Alfred has done with this sleeping giant. At dinner he was keen to point out that it was the land and the respect and work in the vineyard that has allowed the vines to flourish, that is the reason behind this success and nothing to do with him and his work. I would point out that if it was not for Alfred’s hindsight back in the early 90’s to farm organically and now practice bio-dynamic techniques, this would not have come to fruition (in fact a trip to Pontet is not complete without a visit to the stable to see the horses – right – that plough the vineyard!)

At the dinner we went back to front, as they say. Starting with oldest, the 1990, and finishing with the youngest in 2007. The 1990 was lovely and mature; a classic example of Pauillac that has taken on those secondary aromas, the 1994 had more fruit and perhaps a bit more bang and character. We jumped to the 2000 that is still very young and tight and actually struggled when compared to the more classical and aromatic vintages in 2001 and 2002. For me 2001 is one of the most underrated vintages in recent years and, like 2000 in Burgundy, they are just coming into their own. 2003 was flashy, with gorgeous sweet fruit; classier and more composed than many 2003’s I have tasted (in general I am not the biggest fan of the vintage, sorry Mr Parker).

Now personally I think there was real step up in the wines from 2004. More energy, focus and precision; perhaps all the work in the vineyard was now coming to fruition. 2004 and 2006 were similar in style to perhaps the 2001 but with more fruit, texture and depth apparent. 2007 was lovely and honest, it is not a showstopper and not pretending to be a wine it wasn’t. Just fresh, vibrant and classic Pauillac that in 2-3 years this will be perfect. It’s a petty that 2007 has been tarred with such a horrible brush. Now I have left the 2005 last on purpose. There is no other way of describing this but… legendary. This is certainly up there as one of the wines of this historic vintage, the greatest Pontet I have tasted. Oh so young, but I couldn’t help but be blown away by the structure, depth and layers of fruit on offer. All the while it felt so precise and delicate with finish that lingered on and on. Incredible considering the concentration of this wine. As Alfred said, this is a wine that you can only make once in a lifetime. This was his Mona Lisa or the Sistine Chapel…. Well done indeed Monsieur Tesseron, I take my hat off to you. This is why I love wine so much!

Having said that he was also getting fairly excited about what the 2009 vintage has brought with it… we shall see!