Viva Italia!! The week Italy’s finest came to No.3 for the Anteprima 2006 Tasting!

It had in many ways been a decade in the making: the culmination of years of monitoring the Italian fine wine scene; of passing on the increasingly good news (and fine wines) to customers; during which period our sales of Italian wine had risen nearly fourfold while the number of product lines doubled and some. And now here they all were, in London, for the very first time in a few cases, twenty of Berrys’ finest Italian producers, keen to get on with it and show the lucky few what they were made of…

This milestone event in Berrys’ history set out to break new ground, not just by hosting such an event but also with a Question and Answer session aimed at uniting journalists and producers in Vintners’ Hall, London, spiritual home to the UK wine trade. Next up, a journalist tasting (see the video of  Tim Atkin MW above) and one later devoted to 180 private customers. As way of finale, the following day there was a four-hour luncheon in the No.3 St. James’s Street cellars, ‘La Festicciola!’ (‘the get-together’) to celebrate older wines and company, along with Berrys’ fine wine advisors and cherished customers.

For the Q and A session, a panel of producers (including Alberto Graci, below left) joined me to debate a series of topics with journalists that included: 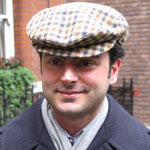 Whether the ‘en-primeur’ should be adopted by the Italian fine wine industry (A: never in the Bordeaux sense, although allocations of sought after wines could perhaps be made available prematurely to meet demand, as per Burgundy)

If the ‘menzioni geografica aggiuntive’ or ‘cru’ system recently rubber stamped by Rome for adoption in Piedmont, was merely style over substance, simply copying the French, or something more meaningful to be rolled out elsewhere (A: that the Piedmontese ‘menzioni geografica aggiuntive’ highlighted vineyards rather than organising them in any hierarchical, prejudicial order, Grand or Premier Cru, encouraged a better understanding of the territory and its wine. Montalcino has identified several different geological zones, so could in theory adopt the system in due course)

What role climate change had played in the increasing quality of the wines over the past two decades (A: that other factors, such as better work in the vineyards and more investment in the cantina was just as influential); what had changed the UK’s perception of Italian fine wine: the market, wine, or press? (A: that wholesale improvements in the quality of UK diet/restaurants had encouraged more adventurous wine lists, meeting a more educated appetite stemming from widespread air travel/tourism up and down the peninsula, so encouraging artisan producers.)…and with that it was off to the local Indian! (later) 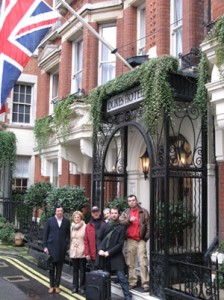 The Anteprima tasting itself centred on the exciting 2006 vintage, in several cases showing unfinished samples before being bottled and shipped, alongside older vintages such as the perfumed, elegant 2005s. The quality of the 2006 vintage being unequivocally fine, among all our suppliers (‘course I’d say that!) A princely twelve Piemontese producers (above right, near the cellars – Cascina delle Rose, Cigliuti, Rivella Serafino, Roagna, Alessandria, E.Pira, Sandrone, Cantina Mascarello, Cascina Fontana, Marcarini, Giovanni Rosso, Giuseppe Mascarello) showed their Barbaresco and Barolo wines to grandstand effect; the wines offering generosity, complexity as well as verve. The Sicilian Alberto Aiello Graci slotted in next: his sun-kissed elegant reds from the volcanic Monte Etna paving the way for several Toscanese: Valgiano, Castello di Ama, Rasa di Andrea Mantengoli, Fonterenza, San Giuseppe and Cerbaiona; their 2006s broad, fleshy, profound and structured for the longer term. Duccio Pompili’s Sagrantino di Montefalco Cantina Fontecolle very much continued the distinguished theme while Marinella Camerani’s pinpoint Mithas Amarone brought up the tail ever so sweetly! 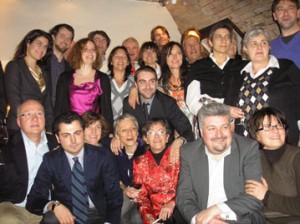 La Festicciola! luncheon (left) deep in Berrys’ St. James’s Street cellars the day after brought together  producers, salesmen and customers; a celebration of the collective, of the artisan producer and of the older vintages they’d brought along to share out. There were too many wines to list here but here’s a flavour: a magnum of Graci’s ’09 Etna Bianco (a singularly, sapid  blend of Catarrato/Carricante), Roagna’s ’05 Solea (a rapier like Chardonnay/Nebbiolo blend), Vittore Alessandria’s ’95 Monvigliero (delicately fresh and perfumed), Teobaldo and Maria Rivella’s ’01 Montestefano (profound but still so young), Davide Rosso’s ’01 Cerretta (resolute, gifted, a delight), Cascina delle Rose’s ’01 Rio Sordo (saw no oak apparently but still so complex and pretty), Chiara Boschis ’00 Cannubi (in magnum, supreme succulence and poise), Manuel Marchetti’s ’03 Brunate (confounding all those who’d written off the vintage with its detailed complexity), Marinella’s ’98 Mithas Amarone (mmmm!), Barbara Sandrone’s ’96 Cannubi Boschis (sensual, and still so young), Rivella’s ’99 Montestefano (as if the ’01 wasn’t impressive enough, Teobaldo pressed home with this jewel, still ten years off its best), Maria Teresa Mascarello’s ’89 Barolo (in magnum, heaven-sent)…

And now my mind swims with what might be achieved next February 2011. Pencil it in!

3 Responses to “Viva Italia!! The week Italy’s finest came to No.3 for the Anteprima 2006 Tasting!”