A tale of two Barbareschi…

– your chance ‘ to be a buyer’, yet more Biodynamics and fresh from the market… 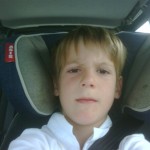 I just heard that my six year old son Patrick (left) made the correct call when asked to judge which Champagne should be served at his cousin’s wedding this summer – that’s my boy! The power of genetics!

Want to play? Fancy yourself as a bit of a buyer? I came across two quite different Barbareschi last week, producing markedly different results. Do you want to take a guess at who delivered the finest wine, and why?!

Producer A’s son took over the 10 hectares (75% Nebbiolo and Barbera, Dolcetto and some Arneis) in 1995 (though the estate first bottled in ’67), including some rented vineyards dotted around the region. His background is hotel and restaurants, so professes to know something about the consumer; a large share of their production is sold into Germany. His wife grew up among Barolo vines before moving to the town. They employ a recognised, if not minted, consultant to help make the wine. Vinification is in a new cantina in stainless steel tanks where the must is turned very slowly by paddles, extracting colour and flavours. Their entry Barbaresco is aged in newish looking Slavonian botte; the riserva in part new French barriques. The range comprises 10 wines/ 60,000 bottles.

Producer B is older, taking over the reins back in the ‘80s; has just over two hectares, virtually all Nebbiolo from just outside their back door. This is also a husband and wife operation (a hectare each), but as they have such a small concern there’s been little need to employ anyone to help; nothing seems to have changed since his father first started bottling in 1967. Vinification takes place under the house in a combination of stainless steel tanks and old wood, depending on the size of the harvest. Then into old Slavonian botte for extended ageing; only one Barbaresco is produced/9000 bottles, sold mostly to local trade and friends.

Easy eh?! The answer (assuming my palate wasn’t deceiving me, again you cry!) will accompany my Week 10 blog, but please let me have your thoughts in the meantime.

Incidentally Producer B moonlights as a white truffle/tartufo hunter. Recently he showed a local dignitary how it’s done; something which entailed setting out on an arctic winter’s night. Most importantly though was his comment that it has to take place during the last quarter of the moon’s cycle, for this was when the truffle is at its most potent, and hence most easily detectable (and delectable, non?)!

Further evidence of the moon’s influence on day-to-day Langhe life came to light during a socialist political party to welcome in the new mayor of Alba, Maurizio Marello, where I was seated next to Franco Sandrone, the butcher of Barolo. No really, he’s the ‘macellaio’ and a very good one he is too. His ‘carne cruda’ (female vitello) is rich, smooth and wonderfully fresh while his raw pork sausages have to be tasted to be believed! The secret, he tells me is to make sure you handle the pork in tandem with the lunar cycle; best four or five days after the new moon for top quality and freshness; particularly for salami which won’t keep if it’s put together at any other time – it’ll stink.  He went to say that the same applies for fruit preservation: if you want the best results then avoid the period when the moon is in transition – jar it all up with the new moon! Ditto grass and hair cutting…but then we know all that!

It was on that night, Saturday night in fact, as the strains of an old 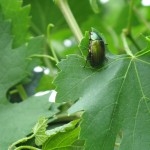 ‘partigiano’/partisan war song ‘Bella Ciao’ echoed across the valley, that I had my first glimpse of a ‘lucciola’, a firefly or glow-worm to you and me. A rare sight these days as the application of the chemical treatment against ‘flavecenza dorata’ (a viticultural equivalent of the Black Death) has been hitting insects hard and the ‘lucciola’ and ‘api’/bee notably so; a very worrying development. Luciano Sandrone (no relation – see the video below) suggests that a change in maize seed has also impacted on the local bee population who’ve now flown to the floral Alpine hills, along with the cows, who walked. While the authorities  know ‘flavecenza dorata’  stems from overcrowded Venetian nurseries, borne on the back of an influx of non-native varieties such as Chardonnay, they’re ignorant as to how to combat it effectively so until then everyone’s obliged to spray against all vectors; it’s reminiscent of the herd mentality immunisation strategy adopted by government in the face of MMR etc. Some are beginning to question its wisdom, refusing to spray so indiscriminately. Unfortunately this firefly’s neon light was tragically extinguished soon after, squished under the windscreen wiper triggered as I lurched clumsily toward the window to get a closer look. 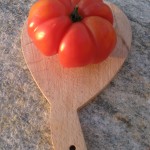 Otherwise not much seems to have changed during my two week ‘break’ in the UK. Well, okay, so the vines now resemble hedgerows; sporadic bunches of grapes hang where flowers once blossomed (‘sporadic’ due to a cold snap post 2008 flowering) and bird song has been replaced with the endless fizzz of cicadas. In the market, oranges have now lost out to apricots, though the local crop from across the river in Roero were peppered with hail a week before last along with some vineyards. So I opted for the paler, yellow, and finer variety as supplied by my friend Giuliana, a smallholder in nearby Magliano (see also the photo of the beautiful pomodoror). Best of all are the ‘fagiolini’ or green string bean: not from Egypt but all the way from Montelupo Albese, five minutes across the valley.

Next Week: Answer to the ‘Who wants to be a Buyer’ Quiz!; Clash of the Titans: Ceretto, Gaja, and Fontanafredda ‘slug’ it out; and further treats jostling with treats!