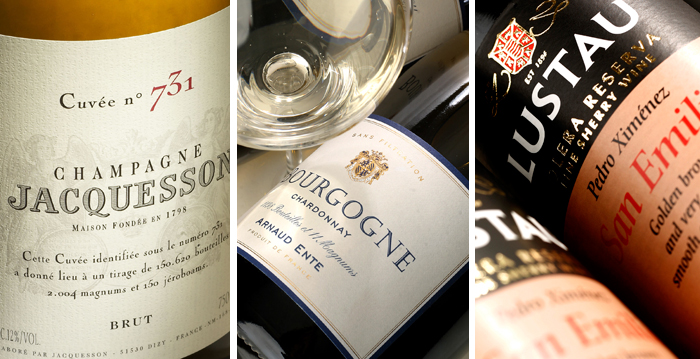 Well it’s that time of year when Berrys’ Fine Wine Team are having sleepless nights and waking up in cold sweats…What will the Christmas Day wine list be this year! It has been a matter of much contention in the office but after weeks of rumours, soul searching and money lending, I have finally come up with what I hope to be the finest line up in my 28 years on this planet!

Well then to kick start proceedings, I find it very hard to get out of neutral on Christmas Day morning without a bit the sparkling stuff with my smoked salmon and scrambled eggs. Here lies the first problem of the day as some of my less cultured family members had the audacity to throw some orange juice into the bottle of Jacquesson 731 I provided last year. Don’t get me wrong I love a Bucks Fizz, but to sacrifice a bottle from my favourite Champagne house…not gonna happen! So I’ve settled for the ever reliable Prosecco from Trevisiol. Bone dry, and a lovely drop on its own; it is also great value for money which means I won’t have to be picked up off the floor this year when the OJ comes out.

Right, so midday has arrived and the edge has been taken off the morning and presents are being opened. Mum’s nagging me to lay the table and thoughts turn to the white wine to accompany our starter. Christmas Day is not complete without white Burgundy, however my sis is overt to the heavy use of oak in wine, so what I need is minerality and finesse. One might focus on the floral edge of Puligny-Montrachet while steering away from the richness of Meursault. I would agree if it was not for the Sachin Tendulkar (little maestro) of Meursault, Arnaud Ente! This young genius crafts some of the finest and most precise wines in the world, that seem to dance effortlessly on the palate. So his 2005 village Meursault it is then! I also have some of his 2006 Bourgogne Blanc in the fridge as back up for those who really get into the party spirit!

Ok then the party hats are on and now it’s time for the deal breaker…the reds! Despite months of pleading with mum, Turkey has been chosen and not goose. I can’t lie, this did take me out of stride for a few weeks but like the great Red Rum I gained composure and settled back into a canter. Since visiting Burgundy in November I have had my heart set on some mature red burgundy this Christmas, saving the grandeur of Bordeaux for Boxing day. Things were all looking rosy until two weeks ago when my colleague Joss Fowler gave me some news that sent my world into despair…the 25th December is a leaf day in the biodynamic calendar! This was catastrophic to put it mildly, in basic terms this is a day when the atmosphere subjects an enormous amount of pressure onto the earth and those far wiser than yours truly swear that this has an effect on a wine, with the fruit not coming to the fore and the wine tasting rather muted and numb. Pinot being the delicate little creature it is, it tends to be effected by a much greater extent. Now you may say this sounds like witchcraft, but time and time again in tastings this view has been proven correct.

So now that mature, gamey Burgundy is out of the running, I’ve decided to take the risk of offering some youthful Burgundy, in the hope that primary, muscular fruit will have the bones to cope! So the 2000 Armand Rousseau, Gevrey Chambertin 1er Cru, Clos St. Jacques is the one. If a wine which comes from a year that has been drinking so well from even a young age, from a legendary Domaine and from arguably the greatest 1er cru of all isn’t a recipe for success then I’m calling Gordon Ramsey. Along with this little ripper my New World smokey of the day is the 2003 Au Bon Climat, Knox Alexander Pinot Noir. This is my favourite wine from a reference point Pinot Noir producer. By now the Queen’s speech is over and the finishing line is in sight. All we need is something to accompany the Christmas pudding and send you on your way to the customary bond film! This year it’s Lustau’s PX Sherry. The Aussies have it very wrong as this is the amber nectar and a heck of a lot better value than Fosters!

Well that’s it, for good or bad that is the Bilbey Christmas list. All I can say is good luck!!!

PS…For those who want to know, Boxing Day lunch is a battle of the Bordeaux blends with the 1990 Cos d’Estournel  perched alongside the great 1980 Yarra Yering Dry Red Wine No 1. The latter will this year be a tribute to the late great Dr Carrodus, a legend of the wine world who had a huge influence on me. He will be missed.