Nouveau rich: why Beaujolais is back 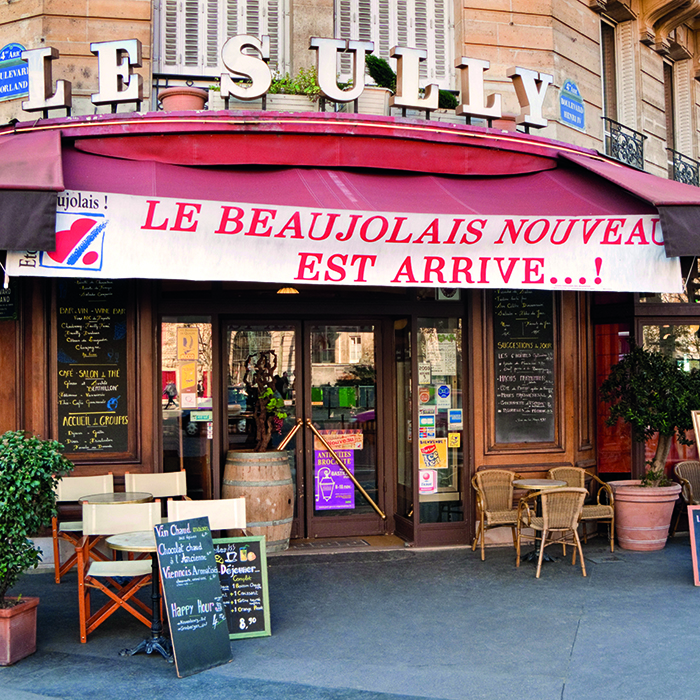 A Parisian bistro advertises the arrival of Beaujolais Nouveau

Today, the third Thursday in November is known to those with a vinous slant as the day on which Beaujolais’s “Nouveau” wines are released into the world. These fruit-forward bottlings of the new vintage had their heyday in the ‘80s – but are now seeing a resurgence.

The Nouveau style of wine was originally made for post-harvest celebrations and was consumed locally. After the Second World War, a change in the law allowed producers to sell this young wine commercially and the style’s popularity soared – no doubt helped by the fact it provided welcome cashflow for the region’s vignerons. Starting with Paris bistros, the craze eventually spread to markets around the world, from Australia to Japan. By 1988, Nouveau accounted for 60 percent of Beaujolais produced.

But the Nouveau dream didn’t last. As its popularity rose, quality was sometimes forgone; resulting in a glut of wine in the early ‘90s. Tastes changed too, and bold, richer styles of wine became the new darling of the market (perhaps in line with the rise of a particular critic and his palate – Robert Parker Jr). Today, however, the pendulum is swinging back toward juicy, fresh and elegant styles of wine, ripe for the rise of Nouveau.

Beaujolais and Gamay are finally being taken seriously, with wines from the region’s 10 Crus sitting alongside Burgundy’s best on some of the world’s most venerable wine lists. The last few years have even seen a new wave of producers comfortable enough to reclaim Nouveau, embracing its “smashability”, but producing high-quality examples of the style.

Elsewhere, producers are beginning to imitate the Beaujolais style – crafting early drinking, carbonically macerated “Nouveau” wines that are mouth-watering, balanced and unbelievably quaffable, whether that’s in Tasmania, the Adelaide Hills, Sonoma or elsewhere. They’re not limiting themselves to Gamay either, but working with Pinot Noir, Syrah and other grapes too.

As Nouveau sees a renaissance – in the Beaujolais and elsewhere – the day now provides an excellent excuse to talk about the many brilliant wines produced in the region.

2017 Morgon, Côte du Py, Jean-Marc Burgaud (£18.95): The slope of the Côte de Py yields Morgon’s best wines – the hard granite soils and aspect producing dense age-worthy styles. With a streak of minerality, a pretty nose of berry-fruit and florals, and structured tannins, this is outstanding now with time in the glass or decanter but will only improve with time in the cellar.

2015 Moulin-à-Vent, Les Rouchaux, Thibault Liger-Belair (£22.50): Thibault is one of several Burgundian producers looking south, to the Beaujolais, where land prices are cheaper to craft serious terroir-driven expressions from the region. Much like Jean-Marc’s Côte du Py, this will only blossom with time, but now offers sweet, dark fruit, spice and mineral freshness.

2017 Régnié, Domaine Julien Sunier (£23.50): A champion of the natural wine movement, Julien’s wines are reliably delicious. This – in contrast to the other two wines here – is a more “traditional” idea of Beaujolais; more gratuitously fruity, yet no less serious in terms of quality.

A note on production: how Nouveau is made

To create a wine that is suited to being consumed only weeks after harvest, producers employ carbonic, or semi-carbonic, maceration. Whole bunches of grapes are placed in a carbon-dioxide-rich environment, encouraging the berries effectively to ferment within their own skins. The result is a lower-alcohol, soft, fruity, aromatic style of red wine; sometimes bearing a hint of bubble gum or banana. At their best, these are wines that can be glugged happily, chilled lightly and sit perfectly alongside platters of charcuterie.

Explore our full range of Beaujolais on bbr.com