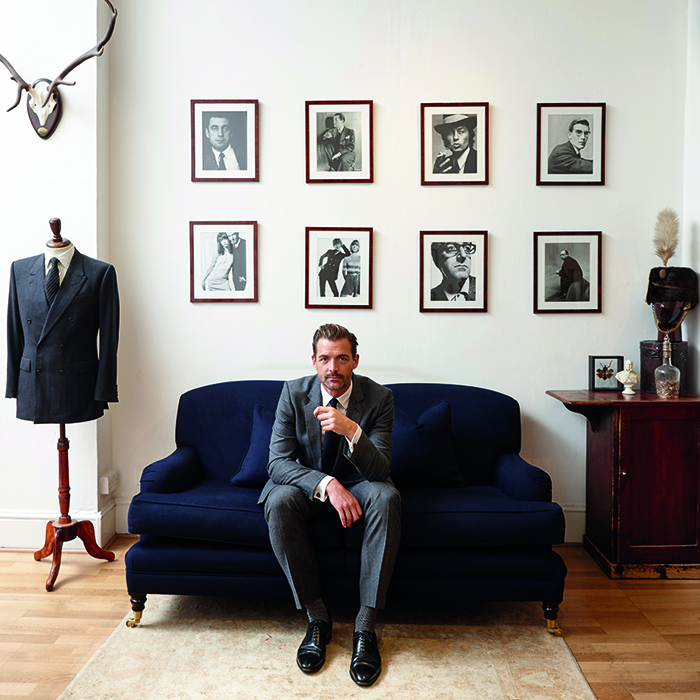 Patrick Grant, acclaimed menswear designer, Berry Bros. & Rudd neighbour and occasional guest at No.3, is the man behind 63 Pall Mall’s beautifully crafted uniforms. Here, Sophie McLean talks to him a about why in fashion – as in wine – “less, but better”, is a philosophy to live by

In the late 19th century, The Times proclaimed: “’The Tautz’s make is as easily recognised by a connoisseur as the best brand of Claret or the choicest Havana.” In the drawing room of the company whose Clarets could, conceivably, have been those to which the paper refers, as well as on the street still home to many a fine purveyor of cigars, it seems fitting to have the current owner and creative director to E Tautz and Savile Row tailor Norton & Sons, with us as a guest at No.3.

Patrick Grant sits on our sofa, lean and dressed in deep blue. The matching winter sky outside is slowly setting and we only have a brief window of time to chat before the Scottish-born fashion designer kilts up for a Burns Night supper this evening. Above him hangs a portrait of Prince Edward, Duke of Kent, a preparatory sketch by artist Andrew Festing – one where elements of tradition and modernity, seamlessly combine. Grant is similarly well-documented for his ability to preserve heritage in a swathe of contemporary design. “The important thing is not to be stuck in any particular set pattern of product or behaviour,” he says.

In 2005, Grant bought E. Tautz and Sons, founded in 1867. The company was “an innovator of sportswear” he says. “They developed britches that were completely revolutionary – the basis of the modern plus fours and plus twos.” Since his takeover of the brand, Grant maintains that the crucial factor in its evolution has been “remaining deferential to a heritage.”

We discuss the current state of British fashion, product development, and how he interprets current trends: “We are in an odd state of flux,” he says. “Traditional fashion seasons have been thrown out of the window. People are doing what they like when they like. There is no [longer the] need to wait for September to release winter collections.” For brands such as his, how does this affect Grant’s own creative considerations? He says they “must move with the way that the world is moving” – noting a recent propensity for the more casual dress, and a desire to be a little different.

“We’ve seen a big de-formalisation of office wear among our customers,” he says. “Their everyday uniform has changed and we’ve had to adapt to that.” For instance, “we sell a lot more ‘non-matching’ jackets.” And he notes the loss of the tie. “The tie was a prevailing fashion” which, coupled with the new leaning for “odd” jackets “has caused us to think about how we do what we do. How we match the colours.”

Grant’s thoughts on highly disposable fashion are perhaps not surprising. “Fashion is wrangling with the challenges of trying to stop fast-fashion killing everything for the people who innovate and come up with things that are new. The copiers beat them to it. It’s challenging, it has become the battle of the heavy hitters.” Grant’s answer to this challenge was formed in 2016 when he founded his Community Clothing company. Its garments are made in British factories dating back to 1860 and which, financially at least, were in dire straits before he intervened. His aim is to create clothes that will last, and that will give these home-grown businesses confidence to grow, invest, and become more efficient.

“It’s perfectly possible to make and sell clothes at an affordable price that are made in the UK,” he says. Three hundred years ago, fashion was a very low turnover industry. Today, it has become an industry almost diametrically opposed to the idea of sustainability; Grant counsels that we should be “Purchasing less, wearing less.” But, presumably better.

Increasingly, this is an idea that is being applied to all areas of consumable life. Restaurants (those high-profile, pop-up and fixed) are making use of ingredients they might otherwise have thrown away; design brands use “up-cycled” materials – such as reclaimed wood and steel; cars are now being run on rechargeable glycerol batteries, and, elsewhere, “sustainability” has become an essential element for brands.

This is “a big thorny problem for the fashion world,” Grant explains. For him, however, “Norton is the most sustainable clothing business: we don’t waste anything, we only make clothes to order.” Provenance is every bit as important to him – in wine, food, fashion or otherwise. “I’ve always been very interested in the provenance of our products: British tweed, British flannels, the product gets better the more you wear it. It improves with use. The canvas softens.”

When it comes to navigating trends or fashions, Grant’s prevailing message is that less is more. Buy better, buy well: then – whether it’s a well-worn jacket or a long-treasured bottle of wine, these are the items through which life’s rich stories are weaved.

Patrick Grant designed our 63 Pall Mall uniforms; for more information on Community Clothing go to communityclothing.co.uk; for more on E. Tautz go to etautz.com; for more on Norton & Sons, go to nortonandsons.co.uk

One Response to “Design for life”