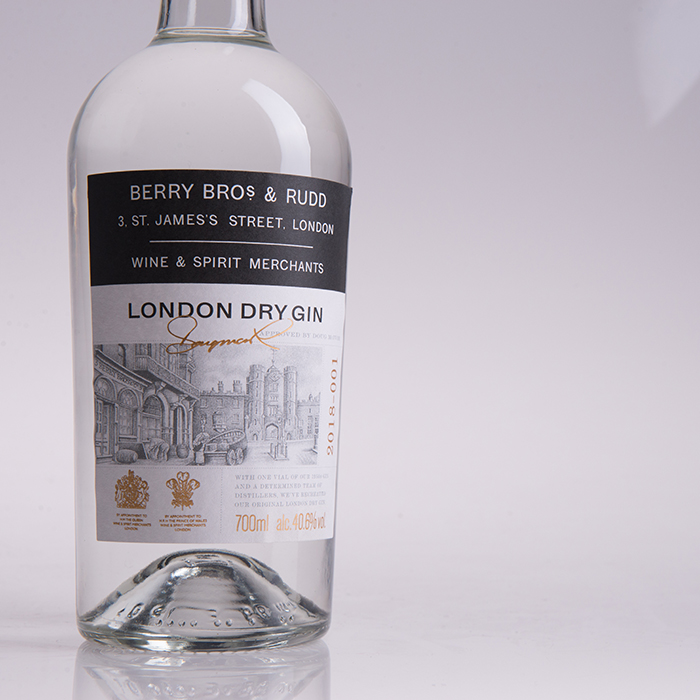 This month sees the re-launch of the once much-loved, Berry Bros. & Rudd London Dry Gin. We talk to distiller, Charles Maxwell, about bringing the original recipe back to life

The Berry Bros. & Rudd London Dry Gin first featured on the company price list in 1909. Known fondly as “Berrys’ Best”, it was also included in “The Fine Art of Mixing Drinks” by David Embury in 1948 as an example of “superior British gin production”. Sold both here and in the US, in small amounts to special customers, other purveyors of the brand back then included Hollywood director, Frank Capra. Since its original inception and due to its subsequent popularity, today only one bottle remains – one that dates back to 1950. Distiller Charles Maxwell has recreated the original flavour, from a tiny vial of liquid supplied to him from this original bottle.

“Gin ages very slowly. You could put two gins, twenty years apart, next to each other, and one could be its brother,” he says when we discuss the challenges that this particular task has posed. Charles made his 130th gin recipe last year and currently has another 12 or so new gins under development. We are in the boardroom of his south-west London distillery – a modest place, with bright, wide windows that overlook sun-drenched, residential property in Clapham. The room is bedecked with bottles, clear ones distorting the view in a myriad of sizes, giant 15 litre Bordeaux-shaped Nebuchadnezzars taking up space on the floor, and others both more generic, and highly stylised, dusting the top of the cabinets to our side.

Charles, has had his own gin distilling business here for over twenty years. For a spirit often dubbed “Mother’s ruin” it is ironic to note that it was through his mother that Charles first became interested in this field. His own “spirited” career started at the Finsbury Distillery Company, a company that has been in his mother’s family since the 19th Century. Her family were also owners of Stone’s Ginger Wine, originally based in Wandsworth.

To recreate the flavours of Berry Bros. & Rudd London Dry Gin, Charles’ team did various test distillations, adding in different botanicals to try to match the original flavours. The resultant liquid is batch-distilled, through Charles’ two stainless steel stills – “Tom Thumb” and “Thumbelina”, made by John Door, an old London still maker. Charles says that stainless steel (rather than copper) “provides a system that is more gentle in extracting the oils out of the botanicals.” Charles mainly buys his botanicals from France – nodding to a whole apothecary listed on the whiteboard here by the stills, from the quintessential and very necessary juniper, to more exotic and unusual flavours such as liquorice root, hawthorne, angelica seed, red clover, kaffir, wormwood, fenugreek, raspberry leaves, bogmyrtle and tonka. Gold-leaf too perhaps? The list is almost never-ending. The new Berry Bros. & Rudd London Dry Gin, one he dubs “a very-good, classic London-made gin” has four distinct flavours – juniper berries, coriander seeds, angelica root and winter savory, which is a semi-evergreen herb, native to the Mediterranean and Africa. Juniper, Charles says, is a heavy press oil, coriander seed gives citrus and spicy notes, angelica root a herbally, almost mossy characteristic, and the savory – a herbal, peppery and chaff characteristic, “one of our favourite botanicals.”

Charles dresses the part of “gin connoisseur”, in a double-breasted blue blazer with sheep adorning his almost-hidden tie. His credentials are some of the best in the business – something he clearly hasn’t tired of over the years. “To be working [in gin] in this day and age, I feel incredibly lucky and privileged. It was never meant to be a drink to sniff and spit too much. It is a drink to be enjoyed.” But gin and distillation is not his only raison d’être. In among the bottles are model cars – a Firebird CN7 acts as an oversized paper weight, motoring magazines adorn the coffee table, and huge racing-motif canvases sit primed to drive on the walls. Both he and co-partner Andre Chapman have a demonstrable interest in four wheels. “I used to race Formula Ford in the late 1960s, my mother was not keen, and then when I met my wife I thought ‘I don’t think I’m the next Jackie Stewart.’” Charles instead now tours with The Worshipful Company of Distiller’s livery company – recently driving around Scottish Whisky country. Of his collection, he gives particular mention to a 1933 Rowton – an American engine with a British body, his favourite, and the oldest he has in his collection. An oldie, but a goodie. Much like Berry Bros. & Rudd London Dry Gin.