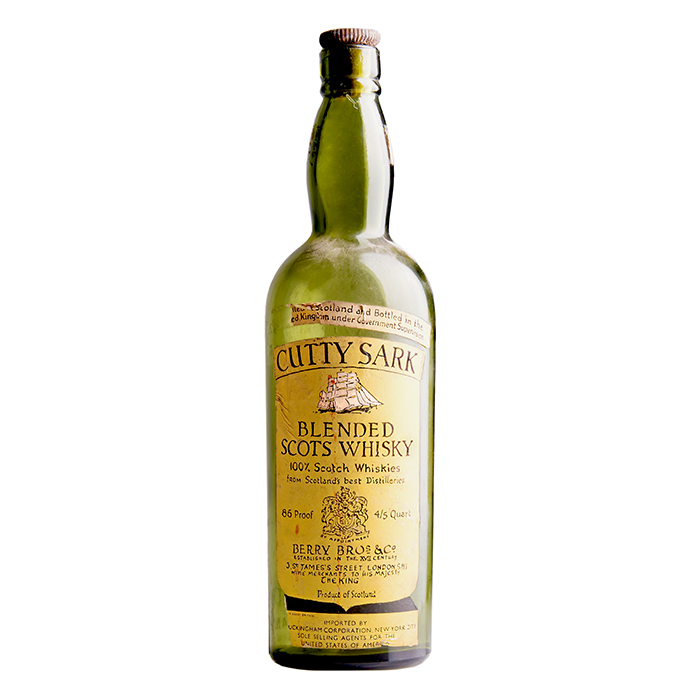 This bottle of Cutty Sark, dating from the early 20th century, sits proudly on the shelf at No.3.

This bottle of Cutty Sark blended Scotch may seem out of place on our shelves of illustrious empties, tucked in amongst bottles of DRC and Lafite. Here, our Brands Heritage Director Ronnie Cox explains its significance

I like to think that when James McBey, the Scottish artist, came to call on the Partners at a famed Berry Bros. & Co. Parlour Lunch in March of 1923, he did so without the knowledge of their quest for a name for their newly selected blend of lighter-styled whiskies. He suggested “Cutty Sark”, the name of the fastest tea clipper, built in Dumbarton, Scotland in 1869, and which had recently been rescued from an anonymous watery grave by the philanthropy of Catherine Dowman (née Courtauld, of the eponymous dynasty). The brand was born. McBey designed the label on a napkin there and then, and the Directors sent it off to the printers with the instruction that the background should look “aged”. The printers made a serendipitous mistake – it came back yellow.

Little did Francis Berry and Hugh Rudd imagine that this yellow-labelled brand would, in 1961, become the first Scotch to sell over 12 million bottles in the US in one year, and double this volume six years later. For Berry Bros & Co., a small wine and spirits merchant based in the old emporium of No.3 St James’s Street, Cutty Sark was the foundation and capital-provider for its development over the next 90 years.

It was Francis Berry, the grandfather of today’s Chairman, Simon, who saw the opportunity. He set up agents in many countries around the world to sell wine. His business in the US was particularly good, so when it looked like Pussyfoot Johnson was likely to get his way and Prohibition would be introduced, he cultivated an excellent agency agreement in the neighbouring – and importantly, British – islands of the Bahamas. 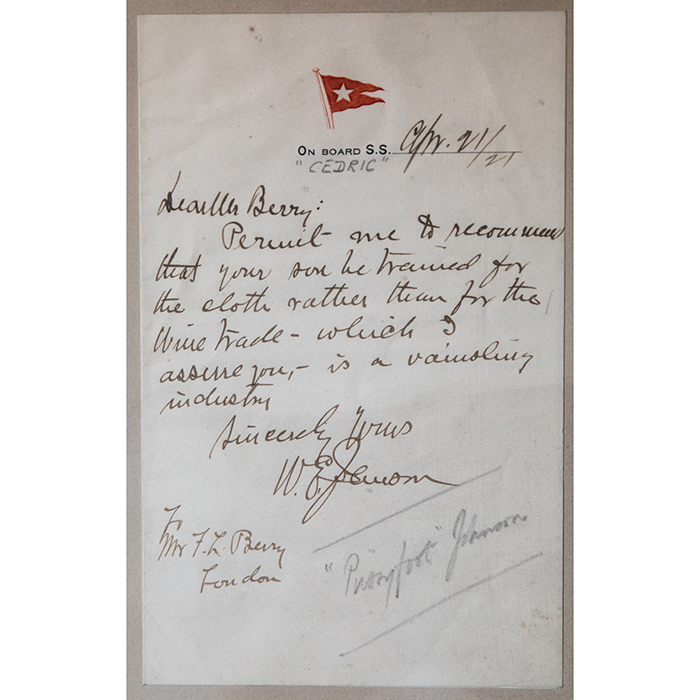 A note from Pussyfoot Johnson to Francis Berry after a crossing on the White Star Line in 1921. Photograph: Piers Cunliffe

According to our records, the first Cutty Sark export price list was produced in 1927, some seven years into Prohibition. But we all assume that it was earlier that Cutty became a favourite of Captain William McCoy – by and large a legitimate trader, known for selling “the real McCoy” – who shipped cases of alcohol from the Bahamas to Rum Row, an invisible line 12 miles off-shore between Manhattan and New Jersey, safely in “international” waters. There he awaited the Rum Runners with their speedy vessels, acting on behalf of the most famous underground “distributors” – “Big Bill” Dwyer, “Legs Diamond” and the mob bosses, Charles “Lucky” Luciano in New York and Al Capone in Chicago. The longer that Prohibition lasted, the better known Bill McCoy became. He built a reputation for selling only the real deal – a reference to the fact that most of the booze available in those days had been cut or adulterated, or both.

But why was Cutty Sark such a success? Firstly, it was a new brand; other blended Scotch whiskies, such as Johnnie Walker, Ballantine’s, Black & White, Haig and White Horse, were in the US before Prohibition and were thus the most susceptible to refilling with, often, dangerous illegal hooch.  Secondly, it became the “done thing” to enjoy blended whiskies before dinner and, compared with others, Cutty Sark was refreshingly smooth and uplifting in style, selected as such by those used to the finesse of the best Cognacs. Lastly, other Scotches left a smoky reminder on the tongue – something which would confuse and upset the taste buds when appreciating good Claret thereafter. Cutty Sark was clean and Claret-friendly.

Back in Britain, the teetotal Prime Minister, Lloyd George, was being lobbied to introduce prohibition. Good sense won the order of the day, however, and set the scene for Cutty Sark to become a truly international brand. While we sold Cutty Sark to the Edrington Group in 2010, its spirit lives on.

If you’re in the area, do come into No.3 St James’s Street and ask to see the note from Pussyfoot Johnson to Francis Berry, written on the White Star Line headed paper after meeting on a crossing from the US to the UK, which reads thus: “Permit me to recommend that your son be trained for the Cloth rather than for the Wine Trade – which I assure you – is a vanishing industry.” Needless to say, Francis Berry ignored the advice.