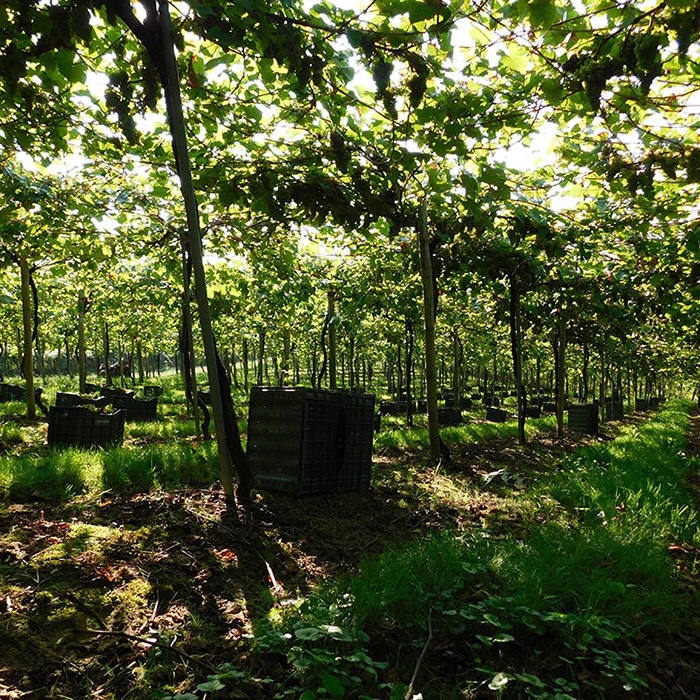 As a new bottle from the Basque country lands on our list, Buyer Will Heslop recounts a trip to the region, combining a dose of Bilbao’s best pintxos with a short detour to Bodega Gorosti, the source of our first Txakoli

We met at Gatwick at 6.30am. As my companions – my girlfriend Laurie and buddy Adam – tucked into the customary pint at ‘spoons, I sipped a flat white and laid out the plan. We would land in Bilbao around 10.45, leap in a hire car and head for Mundaka, where they would enjoy a long lunch on the terrace of Bar Txopos, overlooking the ocean, before returning to Bilbao by train. Meanwhile, I’d drive in the opposite direction, towards San Sebastian, to check out a potential Txakoli supplier, Bodega Gorosti. That evening, we would reassemble at the Airbnb in Bilbao’s Casco Viejo, then hit the town. The next day, Saturday, would involve a visit to the Guggenheim, an even longer lunch, then a flight home in the early evening.

Having been tasked with finding a Txakoli for the Berry Bros. & Rudd range, my colleague Cat and I had requested samples from numerous producers. From the first bench tasting, Gorosti’s Txakoli – named Flysch after the distinctive sedimentary rock formation found at the coastline, a stone’s throw from the bodega – comfortably outperformed the opposition, but we’d have to await the ’16 vintage before placing an order. Although this was not a work trip (hence the pre-flight lager), I couldn’t resist the opportunity to visit the bodega, to learn about the place and the people behind the wine. So while Laurie and Adam drained their glasses of San Miguel, my mind was on a different, but equally refreshing Spanish beverage: Txakoli.

I hesitate over the word Spanish because Txakoli is Basque. The x gives it away, although the word “Txakoli” is, in fact, a hybrid of the Castilian Chacolí and Basque equivalent Txakolina. Nowhere else can it be produced, and nowhere does it make more sense than the pintxo bars and Michelin-starred restaurants of the Basque country. It’s a spritzy, citric, bone-dry white, with a saline tang; a cousin of those other great Atlantic wines, Muscadet and Vinho Verde. Like Muscadet, the best Txakolis tend to spend a little time – perhaps six months – on their lees. To paraphrase Hugh Johnson (writing about Muscadet), Txakoli is as natural an accompaniment to fried fish as a squeeze of lemon.

The flight and collection of the car were effortless, the great advantage of travelling in January to a region notorious for dodgy weather. Yet the sky was blue and temperature balmy as we pressed on to Mundaka, famous for a 10-metre wave which funnels down the estuary, past the town. It’s an iconic spot for surfing, apparently, but on the day we visited the water was as untroubled as the sky. We strolled to a beautiful church on a promontory beside the town, then through narrow streets to Bar Txopos, where I deposited Laurie and Adam. No frills, but what a view: a panorama taking in the church, small harbour and steep cliffs away to the east. I paused for a slice of tortilla, then said hasta pronto.

I drove for an hour along winding roads over improbably high hills, in and out of sight of the ocean, to a tiny hamlet, whose sole residents appeared to be a motley pack of dogs, untethered but amiable. Sat Nav announced that I had arrived: this was Elorriaga, home to Bodega Gorosti.

Just as disconcerting as the absence of people was the fact I hadn’t seen a single vine. I parked and followed the sound of voices through the hamlet to an open field, where a group of women were preparing food and decorations for the Día de San Sebastián, a significant fiesta in these parts. Yes, I was told, you’re in the right place – the bodega is at the bottom of that hill. Back in the car, I rolled tentatively down a vertiginous path, fearing the charming but underpowered Seat might not make it back up. The path lead to an unprepossessing farm building, behind which, cascading down the sun-kissed slope, was perhaps the most picturesque vineyard I’ve ever seen, with vines trained head-height, pergola fashion.

I was greeted by Isabel, one of three siblings who own Gorosti. As I admired the vineyard, which faces due south, on a hill whose opposite flank descends gently to the coast, Isabel told me of the winery’s exacting methods – including hand harvesting with three successive tris  – and its history. Gorosti began bottling Flysch only in 2011, but Isabel’s family has owned this vineyard for generations.

Isabel invited me inside, first to taste Flysch ‘16 straight from the tank. The merest tweak of the tap released a fierce jet of liquid, whose miniscule bubbles continued to jostle in the glass as I lifted it to my nose to breath deep the aromas of lemon, elderflower and – unmistakeably – sea air. So far, so impressive, but Flysch truly comes alive on the palate; rendered kinetic by its residual CO2, linear and purposeful by its mouth-watering acidity. In the wake of this electrifying combination unfolds a surprising level of complexity, with a beguiling oyster-shell character to the fore.

Isabel then showed me the ‘15, its spritz marginally more sedate though still exhilarating. She insisted I try it with dark chocolate, a combination that has no right to work but emphatically does – the bitterness of the two in perfect alignment.

Isabel would send samples of the ’16 as soon as it was bottled. Would it continue to prove so appealing in the cold light of day, when tasted and re-tasted (by no fewer than four MWs) in our clinical tasting room in Basingstoke, a million miles from its natural habitat? You bet it would.

Back in Bilbao, the evening unfolded just as I’d hoped. My colleague Andrew Higgs, an honorary Bilbaíno, had provided me with an extensive list of watering holes. Most were so crowded we could barely squeeze inside but – thanks to the preternatural skill of the bartenders – we were rarely without a drink or pintxo. The pick of the bars was El Globo and La Viña del Ensanche, both on Calle Diputación and, in the Plaza Nueva, Gure Toki and El Rio-Oja.

The boisterous El Globo and avant-garde Gure Toke play host to a younger crowd, while La Viña del Ensanche – the best of the bunch for wines by the glass – and El Rio-Oja are more traditional. The standout dishes were a ración of fried calamari at El Rio-Oja and, at Gure Toke, patatas bravas topped with a fried goose egg. Both washed down with Txakoli, naturally.

The next morning, our spirits high but energy flagging, we set off for the Guggenheim, whose bistro would prove the ideal venue for our long lunch following a fabulous couple of hours among the exhibits. Before entering the gallery, we paused on the terrace (beneath the gaze of Jeff Koon’s Puppy) for a restorative coffee. Noticing, however, the bottle of ice cold Txakoli glistening on a neighbouring table, we decided in unison to amend our order: tres cafés con leche… ¡y tres txakolis por favor!

Many of the best Txakolis never leave the Basque country, such is demand locally for a refreshing white to accompany all those fabulous, fishy pintxos. But in Flysch, we reckon we’ve found a real beauty. We wanted a Txakoli made from 100 percent Hondarribi Zuri in the DO of Getaria – the best quality grape and most celebrated DO for Txakoli production. Flysch, I’m thrilled to report, ticks both boxes, and many more. Citrus dominates the nose, but there’s an appealing hint of elderflower too. The palate is mineral and precise, with bracing acidity and a crushed oyster-shell character that lifts Flysch to another plain of class and complexity. At 11 percent, Flysh is a wonderful wine for summer lunchtimes regardless of the dish, but it works particularly well with fried fish.