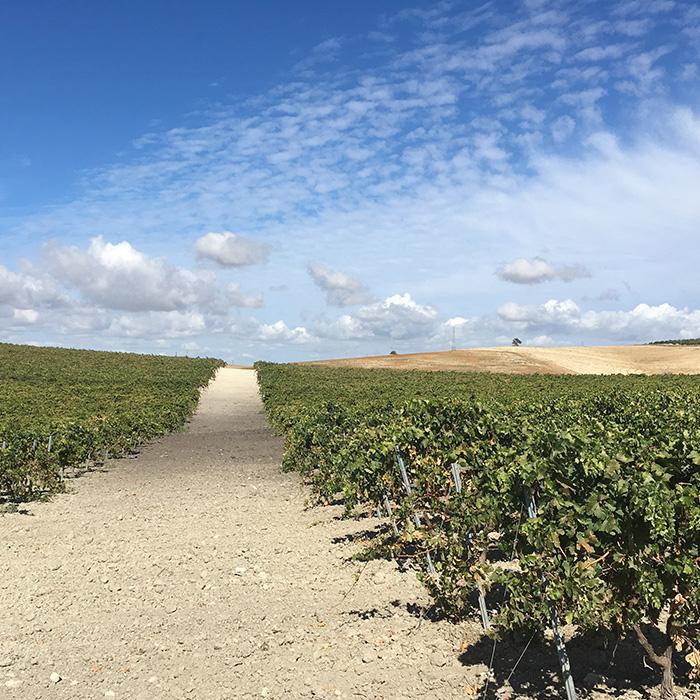 The prestigious house of Lustau has long been making exceptional Sherries but is best known for pioneering “almacenistas”. Here, Felipe Carvallo reports on his trip to Lustau’s bodega in Jerez, and on to two of their almacenistas.

There aren’t a great number of activities that make a 4am trip to Stansted airport seem like an attractive proposition, but the draw of jamón and Amontillado is one such. Arriving in Jerez I was welcomed by Federico, my guide and mentor for this short visit, who seemed to have a more structured and informative schedule in place than my own ambitions of salted pork and fortified wine. Being new to the region I was ready to take some guidance and I made no objections as we set-off in the direction of Lustau’s Montegilillo vineyard; a prime single vineyard located to the north of Jerez, producing excellent Palomino Fino destined for some of the bodega’s top-flight Fino, Amontillado, Palo Cortado and Oloroso wines.

On reaching Montegilillo it was plain to see why this site was highly prized for producing Palomino Fino. In a single word, albariza; the rich, chalk-based soil on which this humble grape variety thrives. The suitability of albariza lies in its natural ability to temper the extremes of the local climate, its fine, porous composition retaining the infrequent though often torrential winter rains deep beneath the surface, to support the vine long into the hot summer.

Working and studying in an industry that seems inherently obsessed with the minutia of every conceivable growing climate, it is often easy to absorb these sorts of explanations with a sense of detachment and compartmentalise them in an area of the brain marked “THEORY”, without fully grasping their significance. Fortunately my visit coincided with the final days of the harvest and I could see from the colossal, football-sized bunches of Palomino Fino burdening the vines that only a unique combination of growing conditions could support such a prolific crop in such an arid setting. 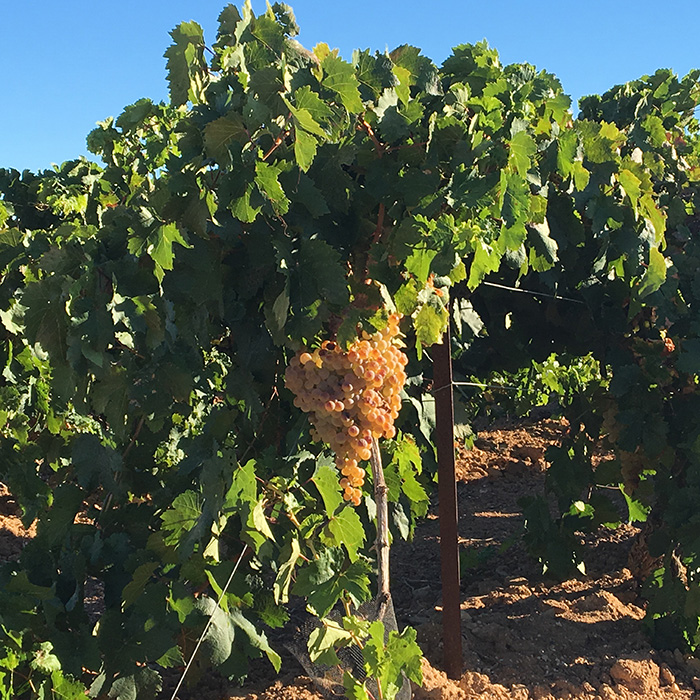 With an initial tour of the vineyard complete, Federico and I headed to Lustau HQ at Los Arcos, a sprawling 19th century citadel of white stucco in the heart of Jerez de la Frontera. This was the site dedicated to the maturation of many of Lustau’s most popular Fino and Amontillado soleras, as well as their oldest and most highly prized soleras of VORS.

Given that the key to Sherry is maturation, the barrels or botas were likely to be numerous, and here several cathedral-like halls did not disappoint. Here high ceilings are designed to maintain the precarious conditions required for flor (a delicate film of yeast essential for the production of Fino) to develop, whilst the albero chalk/sand mixture under foot is frequently dampened with hoses as a rudimentary but effective means of humidity control.

Whilst the size and grandeur of Lustau’s best-known soleras was somewhat expected (though impressive nonetheless), a genuine discovery for me was the vast disparity in the scale of production between the bodega’s entry to mid-range and premium level wines.

Lustau’s sizable production (still small compared to many of its neighbours) had always left an impression that operations in Jerez were all conducted on a substantial scale, though it soon became clear this wasn’t so. Just 33 botas formed the entirety of the East India Solera; one of the great cream Sherries available today. Smaller still were the bodega’s VORS Sherries, aged for a minimum of 30 years. By comparison, referring to these soleras seems somewhat misleading given that number of botas in each of the four soleras can be counted on two hands. A meagre 1,000 bottles are drawn off every year from each of the four VORS soleras: Amontillado, Palo Cortado, Oloroso and Pedro Ximénez. Just 1,000 bottles of each to be shared amongst the great Sherry-drinking markets of the USA, Japan, Netherlands and Germany, makes the output of many Burgundian Grands Crus look positively industrial.

These initial hours in Jerez had left me with plenty to consider (and much to reconsider) but I was growing slightly concerned that no Sherry had passed my lips as yet. Of course Federico had this all in hand and we went upstairs to a tasting room where I was met with the full gamut of Lustau’s wines.

Forming the backbone of Berry Bros. & Rudd’s Sherry offering I was more than well-acquainted with a number these wines, though a couple of great new discoveries such as the superb Amontillado Escuadrilla (alas not available in the UK) were made. Most striking of all in this line-up, however, was the breadth of styles covered in Jerez, from bone-dry, saline, Fino and Manzanilla; to nutty, smoky Amontillado and Palo Cortado; through to the rich savoury and infinitely complex VORS wines.

These were wines to exalt with food, and almost perfectly on cue I spied the cured hind leg of an Iberian black foot pig bobbing up the stairs. To my great fortune it appeared that our tasting room would host an Andalucían elevenses of sorts, and sure enough, shortly after the jamón was in position, Lustau eminences began appearing from various parts of the bodega. Receiving a warm welcome I soon found myself debating the merits of the various cuts of jamón with the caballeros, and re-tasting the line-up of wines contented by one of life’s great food and wine marriages.

This preamble led conveniently on to lunch, which was spent in a sunny square in the centre of Jerez de la Frontera, making many other important and scientific studies of the sublime local tapas and their compatibility with Sherry. The afternoon provided an opportunity for another great cultural experience in the form of a guilt-free siesta, before I set off on my own to explore some of the sights of the beautiful little city, such as the Alcázar, an 11th century Moorish fortress-come-mosque, and the gipsy quarter, birthplace of Jerez’s other great export – flamenco.

Well-rested and up early the following morning, the itinerary was tantalising; a visit to two of Lustau’s almacenistas located at the other points of the Sherry triangle – Sanlúcar de Barrameda and Puerto de Santa María. Almacenista translates from Spanish as “stockholder” or “storekeeper” and in this instance refers to an elite of eight small, independent producers around Jerez with whom Lustau work to produce a range of premium, highly limited-production Sherries. Now seen as Lustau’s signature range, it is arguably one of the best initiatives by any Sherry producer in recent times, helping to convey the artisanal nature of these wines.

Heading west to the town of Sanlúcar de Barrameda, where the Guadalquivir River meets the Mediterranean Sea, we were to meet with Manuel Cuevas Jurado, specialist in Sanlúcar’s speciality – Manzanilla. This bone dry style of Sherry, aged under flor, is produced in the same way as Fino, but here, due to the location, it often shows a tangible salty quality. Cuevas Jurado’s Manzanilla and Manzanila Pasada (longer aged) are considered amongst the very best available, and tasting directly from barrel with Juan Carlos Cuevas, it’s easy to see why. A solera of just 80 butts, most of which are decades old (the oldest over 100 years) produce an array of salty, savoury flavours and textures, more complex than any Manzanilla I had previously come across. The satisfaction of tasting these wines directly from barrel, when the flor is thickest and the wine at its freshest is hard to convey. 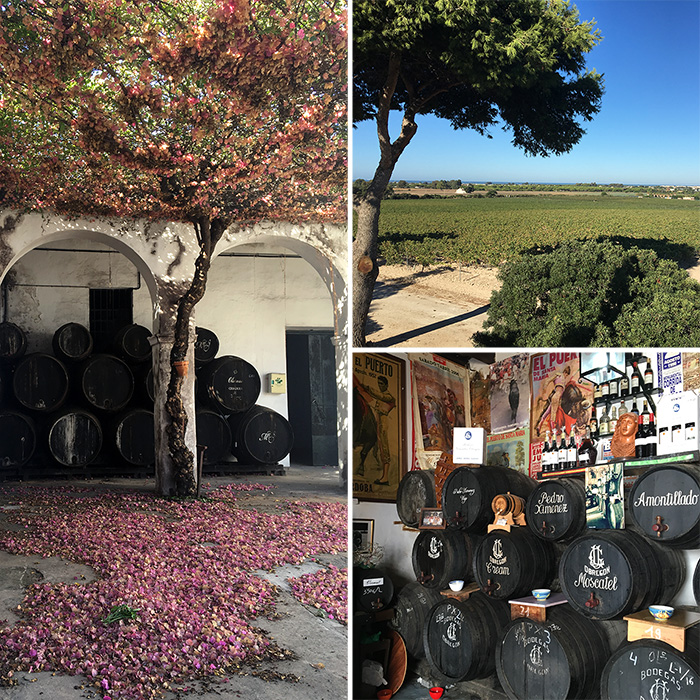 Juan Carlos was a charming and inspirational character tending to his soleras and raising up these great Sherries almost single-handed.

En route to our next almacenista we stopped to survey another of Lustau’s top single vineyards, Las Cruces, located near the town of Chipiona. Here sandier soils are responsible for some particularly fine, floral, aromatic Moscatel fruit, which, as Federico highlighted, is the only grape to ever reveal its fruit character in the finished Sherry.

The bodega of José Luis González Obregón was our next destination. An absolutely unique outfit, run by Manuel González and his two sons, it offered the winning combo of a tiny bodega housing 20 or so butts with a lively outlet for sampling these delicacies on the street out front. A more Andalucían place could not exist and the homage to the local matadors plastered across every inch of the wall left no uncertainty about where the second great passion of this almacenista lay.

This was clearly the place to be on a Friday midday as the place began filling with patrons (most of whom were friends of Manuel González) that had sensibly called time on the working week to come and engage in more pressing social matters. This was apparently the empty period, in the evenings I was told “the young people” arrive and the street hosts something of a carnival. Drawing off wine for his pals directly from the barrel amongst the throng of lively chat and in the bosom of his family, Manuel González seemed to have it sussed. Despite the inviting scenes out front he took time to show us an old, prized Fino solera that had been in use for some 80 years.

Though the Sherry industry has been through some particularly testing times over the last 30 years many positive signs are showing, and the chance visit these small producers offered reassurance that the spirit and community surrounding these great wines was still very much alive. My visit, albeit brief, had offered an excellent first impression of this captivating region, and though the flights may leave at an ungodly hour, Stansted to Jerez direct makes a compelling argument for a follow-up visit.