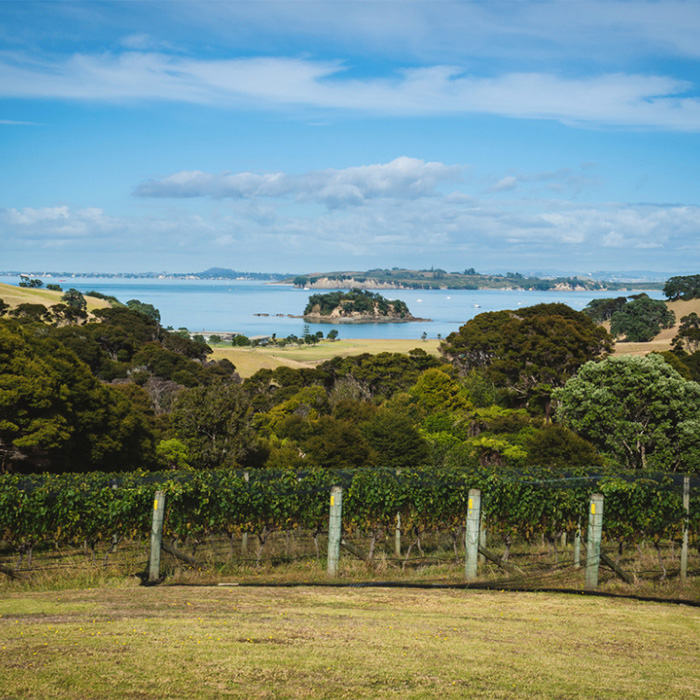 The Arae vineyard, the fruit of which goes into Sam Harrop’s Cedalion Chardonnay. Photograph: Pete Rees

As we release the first wine made under his own label – the exquisite 2013 Cedalion Chardonnay, Sam Harrop MW thinks back to the point where this particular journey began, the moment when – perhaps unknowingly – he took a leap of faith.

It was a typically grey chilly December day in London when the email arrived from New Zealand: “Why don’t you come spend the summer in New Zealand and see what you can make out of our vineyard?” An aunt and uncle had recently bought a plot of land on Waiheke Island, New Zealand which included a small vineyard planted with Chardonnay. I read the email to my wife. We glanced around the tiny living room/kitchen/dinning room of our flat; at our toddler son who was – at that point – trying to package our recently arrived second son into a suitcase and decided it was a sign. To Waiheke Island, and don’t spare the horses!

For those of you who have been to Waiheke Island (and I don’t just mean Auckland, for Waiheke is a very different beast) you will understand how the prospect of three months living and breathing its unique island lifestyle was insanely captivating. Just 30 minutes’ ferry ride from downtown Auckland, this tiny paradise had just about all of our favourite things: amazing weather, stunning beaches, incredible wine, and a vibrant local community from all corners of the world.  Of course, we’d head back to London and our comfortable, if busy, life once the vintage was over. Except it didn’t quite work like that.

The summer of 2013 was spectacular and we fell in love: with the island, the people, the space, the sea air, the weather. Our little winemaking punt took on a life of its own and before we knew it, we had bought a little ‘bach’ (Kiwi for ‘holiday home’) and moved in.  Big call. Very big call. As the summer nights gave way to cooler ones, and the tourists began to dwindle, reality hit home: how on earth was this going to work? The answer included long stints away from my young family and unrelenting jetlag.

Not following the formula

Before moving to London in 1997 (where I was based for 16 years) I studied and worked in the New Zealand wine industry for three years. I love New Zealand wines. I love their intensity, their ripeness, their richness. These more-ish, pungent, primary qualities of many of New Zealand’s wines have been responsible for much of their success in the international market. Most sensible people would assume that with this clear formula for success I would follow suit. But the memories still lingered of the myriad European wines I had tasted and had a hand in making over 20 years, as did the impact of the many innovators and ‘giants’ of the global wine industry under whose watchful eyes I grew from an eager (but very green) young wine enthusiast.

I wanted to challenge expectations and see if I could take New Zealand-grown fruit somewhere it hadn’t been before. My ideal was a mid-point between the best of what the French and the Kiwis have to offer – a more modest, mineral, linear style. Less pungent than most New Zealand wines, but more fruit driven; pure and less extracted than most French wines. Most of all, I wanted to make a wine with an abundance of personality; a wine style that would make the closest friends and the worst enemies; one that had the potential to age for many years, and would be a great partner with food.

Fast-forward almost three years from that fateful December day and we have three stunning vintages under our belts. The resulting wines have given me more than I could ever have expected in a first and second vintage. Subtle and singular, they are a true expression of their magnificent sites and – if early indicators are correct – will improve with age for a long time.

It’s been a tough slog for everyone involved and an exercise fraught with risk. Was it worth it? Absolutely. To all of you on the cusp of taking a leap of faith: good luck and good health!

Sam Harrop’s 2013 Cedalion Single-Vineyard Chardonnay is available exclusively from Berry Bros. & Rudd: find out more about the wine and Sam on bbr.com or samharropwine.com.