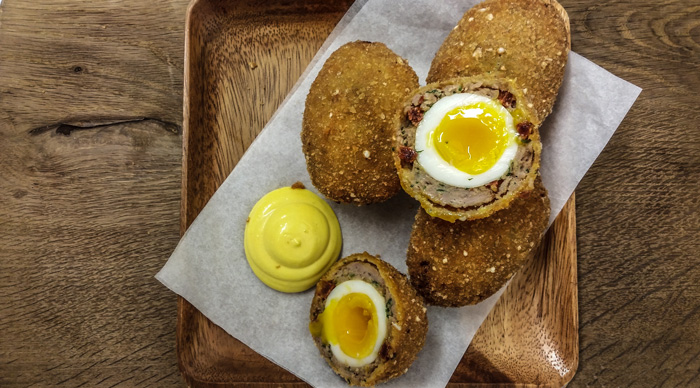 Ensuring your picnic basket is packed with only the finest treats, our Head Chef Stewart Turner provides a premium update on the humble Scotch egg.

Another slightly retro classic, which for me is a picnic must, the Scotch egg is a joy to behold, and when properly made, is as far removed from the mass-produced supermarket offering – an overcooked egg wrapped in the minimum of sausage meat and covered in bright orange crumb – that so puts people off. I’ve spiced this recipe with a bit of chorizo which adds a lovely extra dimension.

Sweat the onion, chilli and garlic in a splash of olive oil for about 5 minutes, until soft but not coloured, then allow to cool. Combine the meat in a food processor and whiz briefly until sticky. Add the onion and chilli mix along with the chives. Mix well and season with salt and pepper.

Divide into six balls. Roll each between two sheets of cling film to form discs of meat. Remove the top layer of cling film and place an egg in the centre of each disc. Gently wrap with the meat until fully sealed. Twist the end of the film and chill for half an hour.

Deep-fry the eggs for about five minutes at 150˚C, turning them every so often so that they are evenly coloured. Remove with a slotted spoon and drain on some kitchen paper.

Serve hot, cold or at room temperature with a good dollop of aioli.

Discover our range of wines for Summer 2015 and Stewart Turner’s other midsummer feasts.