The gentlewomen of St James’s 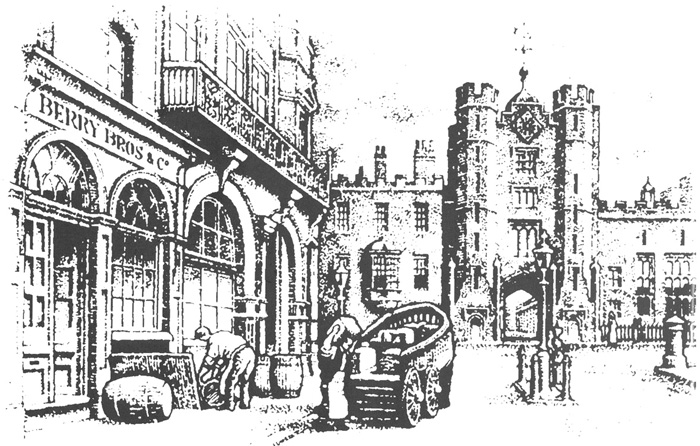 St James’s and its environs have long been a haven for gentlemen, with hatters, tailors, shirt-makers, shoemakers, perfumers, barbers and wine merchants having traded in these parts for centuries past. It might then come as a surprise to many that this most ancient of man-havens, Berry Bros. & Rudd, was founded by a woman. In 1698 the Berrys’ ancestor, the rather enigmatically named Widow Bourne, founded her Italian Warehouse (the late 17th century name for a smart grocer) at the sign of the Coffee Mill. The story of No.3 St. James’s Street as we know it had begun.

The early years of what later became known as Berry Bros. & Rudd saw the outsize shop scales employed for their original purpose, the weighing of the soft commodities of tea, coffee, snuff, tobacco and cocoa – the fashionable stimulants that rose to prominence in the 17th century. Tea was certainly a great favourite of the wife of Charles II, Queen Catherine of Braganza, and the Coffee Mill would have enthusiastically promoted this royally-endorsed drink.

Winding back the centuries still further, this site reveals another feminine milestone in the history of the locality, if not the wine trade. When Henry VIII dissolved the hospital of St James in 1531 and began constructing his hunting lodge for Anne Boleyn, which later became St James’s Palace, he also built a real tennis court, the flank wall of which remains in the passage way from No.3 to Pickering Place. The poor unfortunates of the foundation which previously occupied the area had been exclusively, since its creation in 1100, leperous maidens. Henry unceremoniously packed-off the remaining patients to a convent in Suffolk.

Setting history aside for a moment, women continue to influence the direction of this venerable family-run business, with four of them managing at the most senior level as I write this. Long may the gentlewomen of St James’s continue to enjoy wine and spirits, on both sides of the counter.

One Response to “The gentlewomen of St James’s”