A piece of Pickering Place history 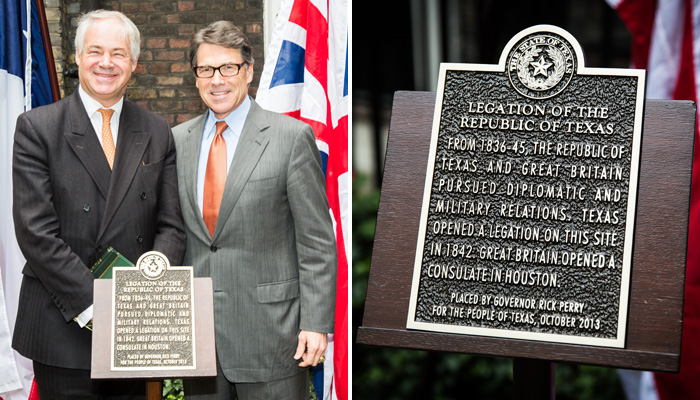 As a symbol of the enduring friendship and partnership between the United Kingdom and Texas, Governor Rick Perry and First Lady Anita Perry presented Her Majesty’s Consul General Andrew Millar with a new plaque marking the site of the former Texas Legation at Berry Bros. & Rudd recently (18th October).

The ceremony took place in Pickering Place behind the shop at the Berry Bros. and Rudd on St James’s Street, which housed the Texas Legation’s Embassy of the Republic of Texas from 1842 to 1845, when Texas was an independent nation. The plaque Gov. Perry unveiled will accompany the original plaque that was dedicated in 1963 by former Texas Gov. Price Daniel. The new plaque reads:

Gov. Perry said: “This is a special day for me and for the people of Texas. When Texas was a fledgling republic, establishing diplomatic relations with a nation as rich in history and prestige as the United Kingdom was a significant accomplishment. It helped put us on the map, to use the phrase quite literally. On days like today, it’s worth remembering our humble beginnings, and how the U.K. was there to help us establish ourselves as a nation, in every sense of the word.” 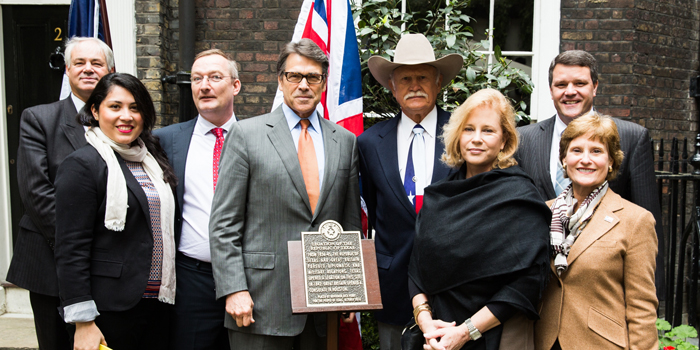 Simon Berry added: “The History of Texas and the history of Berry Bros. & Rudd intertwined for a few years 170 years ago, and it is always important to be reminded of elements of our history. We are very grateful that Governor Perry chose to honour us by unveiling this plaque.”

While in London, the governor has also met with government officials and business leaders in the financial industry, and spoke at a breakfast roundtable for the Legatum Institute.

Texas and the U.K. have a healthy trade relationship. The U.K. was Texas’ 12th largest export destination in 2012 with more than $4.27 billion in Texas exports, including industrial machinery, aircraft, spacecraft and parts, mineral fuels and oils, electric machinery and medical equipment.

The Perrys visited the U.K. on an economic development mission and as guests of Americans for Economic Freedom.