An intriguing last-minute invitation found its way into my inbox recently. Could I attend the launch of a new cuvée from boutique cava producer Gramona, tasted blind with other Gramona cuvées alongside a range of iconic champagnes? A brave decision by Gramona to host such a tasting, given that cava is often seen as a poor relation to champagne. But I have high regard for the long-aged cavas of Gramona, shared by many critics, so the prospect of direct comparisons with champagne e specially was an enticing prospect. So this, and the forecast of yet more “unsettled” weather here in London at the time, whilst the tasting was in Barcelona, made saying yes quite easy.

The venue in ever-hip Barcelona was a new wine bar/microbrewery/brasserie Fábrica Moritz, from the trendy Catalan beer brand Moritz housed in its former brewery. The bar itself, all decked out in distressed industrial chic, also houses a shop (some great LPs) and serves a large array of wines, spirits (including our very own No. 3 gin- it gets around…) and beer, some of which is brewed on site in massive tanks on display. The underground space had more than enough room for the 100 or so mainly Spanish journos (including a winner of the Spanish heat of the Champagne Ambassador competition), winemakers, sommeliers, restaurant/bar owners taking part. 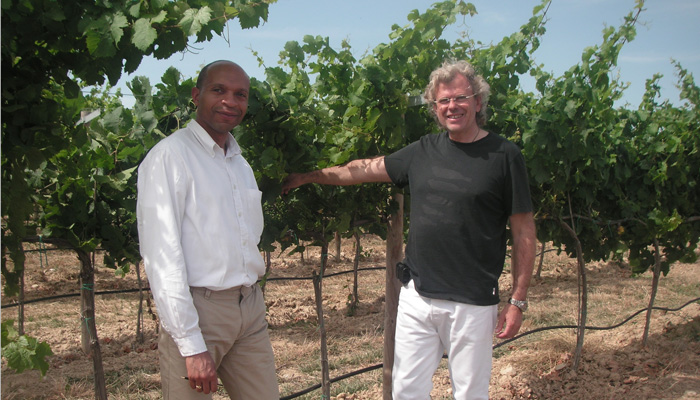 Jaume the enthusiastic and committed winemaker and Xavier Gramona, brand ambassador extraordinaire, both of whom I met last year at their winery, were our hosts for the event. The actual blind tasting (15 wines in total as two flights) was interspersed with a rundown on the history and philosophy of the family-run Gramona by the two brothers now at the helm.  150+ years on from its foundation, they are not resting on their many laurels as a prestigious cava producer, seeking to improve further through research into their soils, biodynamics, grapes and the yeast autolysis/ageing process. I should add at this point that the entire event was spoken predominantly in Catalan, with some Castilian thrown in! I understand a little of these, and luckily, wine-speak sounds similar in many languages, but I was grateful for the powerpoint, and an English-speaking Dutch wine educator to my left and  the Spanish Champagne Ambassador to my right for some translation.

The 2nd flight was definitely made of meatier stuff, hinted at by their deeper colour and richer aromas. My top three turned out to be all from 2000 with extensive lees ageing (12 years). And by chance my top ranked were the new mystery Gramona cuvées, Enoteca 2000-  one with low dosage, the other a zero dosage Brut Natur- followed by Krug 2000. I just preferred the Brut Natur, with its subtle citrus nose, leesy, nutty weight, and a dry but ripe fruit finish.  The hugely powerful Batlle 1999 with its rich, mature porcini nose from Gramona came next. As I said, ranking proved difficult and there really wasn’t much to separate a flight which also included Salon 1999 and La Grande Dame 1998.

Judging from the Catalan/Castilian I could discern during the ensuing discussion, Gramona’s “bravery” in hosting such a tasting was felt justified by the audience, and served to show that cava when made by diligent producers such as Gramona can be ranked alongside the great archetype of sparkling wines that is champagne. A fascinating tasting definitely worth the all-too-brief 24 hours round-trip.