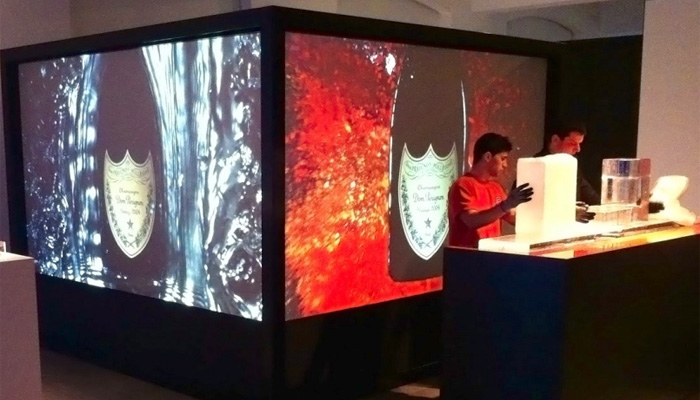 How do you launch an iconic champagne? Well, you can have a light extravaganza on the hallowed grounds of the Abbaye Hautvillers from whence the Dom himself came, and which set Twitter alight with affirmative sparkling commentary. This then becomes a fascinating backdrop on screens for those of us attending the London launch at an art foundation a few weeks later whilst sipping the 2004. The Dom Pérignon chef de cave, Richard Geoffroy, was present to guide us though a food and wine matching experience entitled the Dark Revelation of Dom Pérignon 2004. But technical stuff first.

After the challenges of producing a 2003 vintage (which saw an extremely cold winter, frosts and a blistering heatwave), 2004 was a return to normality climate-wise which made everything both in the vineyard and cellar more straightforward. Geoffroy described it as a “hands-off” year, letting the vintage speak for itself. Famously an almost equal blend of Pinot Noir and Chardonnay, in this year Geoffroy has been unusually candid in specifying 53% Pinot, 47% Chardonnay derived from 30-40 vineyard plots culled from around 100 plots in 20 grand and premier cru villages. Although he wasn’t keen on the term “classic” to describe the vintage, the 2004 does present initially to me as a “classically” elegant Dom Pérignon. More forward at this stage than the full-bodied 2003 and aristocratically impressive 2002, the nose has leesy and toasty notes and the palate showing more Chardonnay citrus, mineral and a briney saline character (of which more later) than Pinot for me at present. 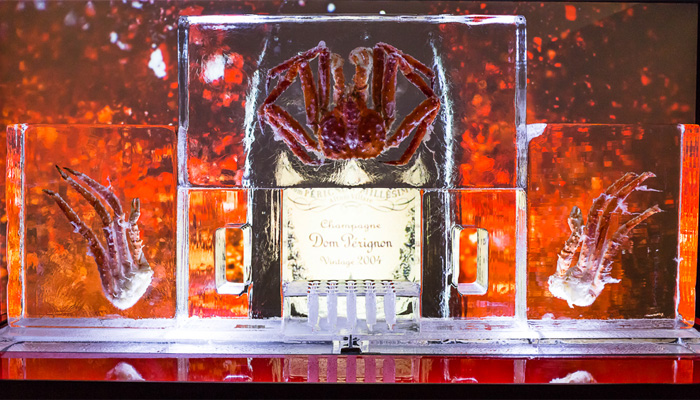 After the reception, we were guided through various rooms to sample a dozen dishes designed to bring out various facets of the champagne. Intriguing highlights for me from both cuisine and champagne matching viewpoints were Dashi- a pure oyster essence which brought out the saline and also a smoky character in the champagne, as well as that elusive umami. Continuing the maritime theme we also had Albacore tuna which for me worked similarly to the Dashi, but my poor palate was confused by the tomato juice aspic alongside (but then I hate Bloody Mary’s – just give me the vodka…).

Grilled crab and grilled liquorice (apparently a Chinese delicacy for teething toddlers!) separately did the trick also. A chestnut crepe with caviar simultaneously highlighted the leesy character (crepe) and brine (caviar) in a wondrous interplay, whilst an aubergine dish with duck consommé and jus (incredibly intense) and star anise, both meaty and fatty, pointed up the deceptive weight of the 2004 with its acidity really cutting through the duck. The “Dark” side of Dom Pérignon perhaps?  These were definitely my favourite plates. Other dishes on the night included sole au vert, lifting out some subtle herbaceous notes present in the ’04;  and sweet dishes which unless a champagne is at least demi-sec, don’t generally work for me. However, whilst marshmallows with jasmine didn’t quite hit the spot, poached pear and mace made for a refreshing pairing.

So, the evening showed once again that champagne is (almost) wasted as just an aperitif and should also be considered, alongside still wines, to pair with more substantial fodder. And whilst Geoffroy might not like to think of 2004 as classic, it is certainly an elegant addition to the Dom P pantheon and one whose development I look forward to following.