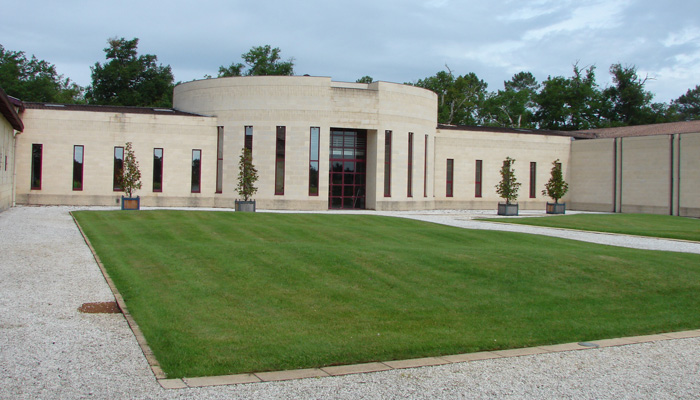 Yesterday evening we had the pleasure of tasting at Ch. Léoville-Las Cases and thoroughly enjoyed the flight of wines in the Domaines Delon stable. Chapelle de Ch. Potensac was fine and fruity upfront and promises to be great value drinking wine, whereas Ch. Potensac was refreshingly fresh. Le Petit Lion and the Grand Vin (excellent concentration and beautiful quality of fruit, something for the long-term) have both been notable successes this year. In fact, many of our team rate Ch. Léoville-Las Cases as one of their favourite wines of the vintage.

This morning we spent our last day of Bordeaux 2012 En Primeur week with a 9am start at Ch. la Mission Haut-Brion, tasting both the Grand Vin and La Mission itself, among many others wines such as Quintus and their Blancs. As an overview of the 9 wines we have tasted, the stable is very impressive. Haut-Brion is particularly generous with fruit in 2012 and Quintus, which is now in its second vintage, is quite impressive too. It has a fantastic and seductive nose, and the winemakers have clearly begun to understand the different terroir of this site to produce such a highly thought of 2012.

We visited Carmes de Haut Brion (a certainty for the personal list of Simon Staples) next before arriving at our penultimate property, the recently very impressive Domaine de Chevalier in Graves. The 2012 red Grand Vin is really seductive, beautiful Claret and without question one of the wines of the week. The length is incredible and perfectly poised.  The white, as usual, was a classic expression of White Bordeaux. We would also categorise Ch. Haut-Bailly in the highly thought of bracket. Veronique Sanders has been able to produce something special this year, remaining true to the property’s exceptional terroir. The wine has the classic smooth and silkiness, but also shows an abundance of fruit and a steely focus.

2012 was scarcely written about prior to this week and early speculation suggested that the wines would be a challenge to taste. Pleasingly, the producers who have taken great care in their grape selections, prudently tended their vines, picked at the right time, worked with their excellent terroir and attempted to create balanced and fruit driven wines have succeeded. In general, Merlot is especially important to these 2012 wines. In some cases it hasn’t been possible to pick Cabernet Sauvignon at optimum ripeness – resulting jn some acidity and not quite enough fruit on the mid-palate and finish. Many claim that it is a Right Bank vintage, but we have certainly found many instances of good Left Bank/Cabernet Sauvignon dominated wines. It is for this reason that we find general statements about vintages, Left/Right Bank and even communes to be miss-leading and unhelpful.

Good winemakers can produce good wine in difficult circumstances and in a vintage such as 2012 and indeed in 2011 prior, this is especially evident. Our Chairman, Simon Berry, has been discussing this principle during the week and his view that in the future customers could start purchasing wines from particular producers in each vintage, rather than wine from many producers in vintages perceived to be the most impressive, could become the norm. If the prices are competitive and the timing of releases are well thought out, which fortunately all of the vignerons appear to be considering appropriately, then 2012 Bordeaux has certainly produced some suitable wines to be purchased en primeur. To find the right wines for your taste and preference, the role of the Wine Merchant and their teams of individuals who have taken the opportunity to taste all of the wines and discussed the vintage and intentions for each wine in person with winemakers, will be vitally important.

We fly back to the UK this afternoon and plan to spend some time reflecting on the wines we have tasted while the teams who look after our private clients from the UK, Hong Kong, Singapore and Japan also head to the South West over the next couple of weeks. Once all of the opinions are collected, we will release our scores (please remember that we are scoring wines in the context of this vintage, and these scores shouldn’t be compared with those from other vintages) , vintage report, individual tasting notes and details of which wines we intend to recommend in our ‘Best Buy’ categories.