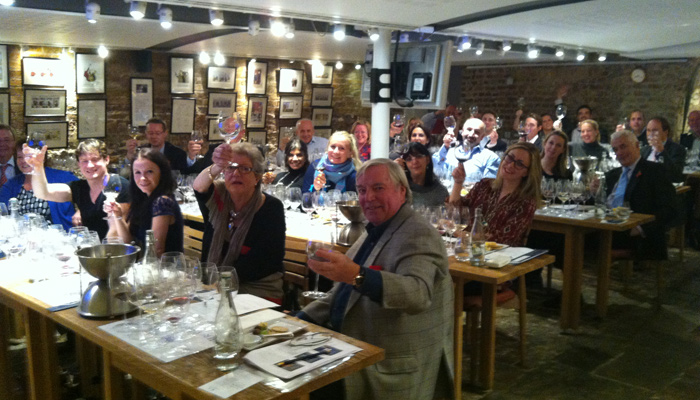 On Monday evening in the Pickering Cellar we set ourselves a challenge: to find out which wine goes best with the UK’s favourite cheese: Cheddar.

A staple of the British cheeseboard, Cheddar is made worldwide, but the tastiest examples come from the West Country, where Cheddar has a ‘Protected Designation of Origin’: West Country Farmhouse Cheddar. For our ‘taste-off’ we chose the King of Cheddar, Montgomery’s, for its dense, smooth but slightly crumbly texture and deliciously rich, nutty and complex flavours.

Most people at the beginning of the event said that they like to drink red wine with their Cheddar, but since the evening was all about experimentation, we chose a wide range of styles to sample: whites, rosé, lighter-bodied reds, full-bodied reds and some sweeties in the form of Sauternes, Madeira and Port. The wines were served in flights of three, with a vote at the end of each flight. At the end participants were asked to vote for their top two matches. Results were very interesting and are summarised below…

Without the cheese, a fresh, minerally Sancerre by François Cotat was the white of choice, but alongside the Cheddar the undisputed winner of the whites was the more esoteric aged white Rioja, the 1993 Reserva from Tondonia. It was felt that the nutty, honeyed complexity of this wine stood up to the cheese perfectly and even echoed some of the flavours of the Cheddar.

Amongst the lighter reds, a 2009 Pommard from Sébastien Magnien was the star of the show both with and without cheese, whereas with our fuller-bodied reds opinions were divided. From a choice of Berrys’ St Estèphe, an Elderton Barossa Shiraz and a Ramey Napa Cabernet Sauvignon, all were popular but the St Estèphe just about pipped the other two to the post, with its firm tannins rendered silky and smooth by the cheese’s concentrated protein content, and its earthy edge echoing a touch of the same in the Cheddar.

Berrys’ Sauternes was the winner without the cheese, whilst the 1997 Croft Quinta da Roeda on its own was deemed too tannic by nearly all. With the cheese, however, its popularity soared, whilst the Sauternes wasn’t nearly as popular. The winner with the cheese in this flight, though, was undisputedly Berrys’ Meredith Full Rich Madeira, whose gorgeous, nutty, dried fruit and caramel character and incisive acidity proved a stunning match for nearly everyone.

The overall two winners of the night? Perhaps surprisingly, a red wine did not feature! Our two favourites were the 1993 White Rioja and the Berrys’ Meredith Full Rich Madeira, both wines showing the intensity of flavour and complexity to stand up to the King of Cheddar.

So what makes a wine work with a cheese as fabulously complex as Montgomery’s Cheddar? If we go by the majority vote, we can conclude that sweet or dry styles are both an option, and red wines are not necessarily the best match. It seems that complexity and concentration of flavour are much more important. However don’t forget that cheese and wine matching is very personal . Tonight was a fascinating (and of course decadent!) experiment that helped us to see where the majority of tastes lay – but there is nothing to beat trying this out for yourself. Do let us know if you do!