A visit from Olivier Bernstein 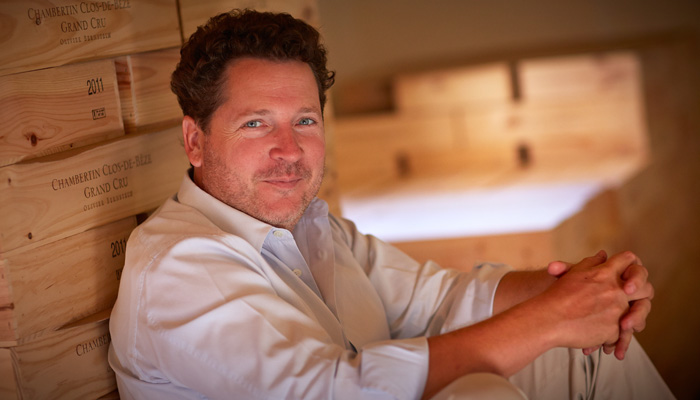 Olivier Bernstein came to Basingstoke for the day to present his superb range of 2010s: an early Eurostar, cross London by tube, and then a quick jaunt by SouthWest trains to sunny Basingstoke, and an hour or two with the Fine Wine team, tasting the range of 13 wines – one village Gevrey-Chambertin, four red premiers crus, five red grands crus and three white wines.

Olivier’s confidence has grown noticeably over the four years we have been dealing with him and his wines, and with good reason. He knows that he has filled his boots with a superlative range of wines in 2010, with his usual hallmarks of seductive rich fruit nonetheless faithful to each terroir, but now with an extra degree of refinement. As well as his own confidence – and mine – in the wines, he is happy too with the reaction of the international press, notably Allen Meadows, Steve Tanzer and Jancis Robinson.

The recipe begins with close management in the vineyards, where almost all the plots enjoy the benefit of old vines, from 40 years old for the Meursault and Puligny to 80+ for Gevrey-Chambertin Cazetiers and Mazis-Chambertin. Olivier pays according to the maximum permitted yield from a given plot, rather than the low crop level which is actually set. During vinification the wines are very lightly handled, with a good proportion of stems included to maintain a lively thread throughout, while the barrels are made to order by master cooper Stéphane Chassin, who comes to taste the new vintage before deciding what type of toasting will suit each individual wine.

It is hard to pick particular favourites, but as well as the wines mentioned above I really enjoyed the dancing elegance of the Chambolle Lavrottes, the suave and sensual Gevrey-Chambertin les Champeaux, and similarly among the grands crus the precision of Clos de la Roche and the velvet Bonnes Mares. All three whites showed a fresh dramatic tension which sets them apart from earlier vintages.