The Eve of the Harvest 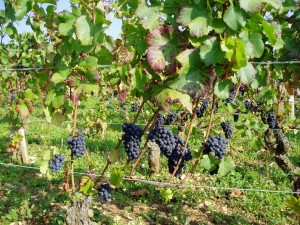 Halfway through the season we knew it would be an early harvest, almost certainly kicking off in August, but the character of the year was yet to be defined with the beautiful spring weather tailing off somewhat as June replaced May. However the sun came back with a vengeance at the end of June, flirting with 40°C , and causing some grilling of the grapes. The first week in July was dry too, bringing thoughts of 1976 back into view. When it rained, solidly and evenly without stormy side effects, on Thursday 7th July the growers were thrilled – it’s a present from the gods, its like gold, they said!

But further rain over the next few days was less welcome and the whole month of July proved cooler and wetter than usual. Having started to talk about bringing forward the harvest from the initially suggested 25th August, producers were now pushing back towards the beginning of September. Indeed veraison was by no means complete at the end of July, and the grapes are usually ripe for harvest one month after colour change.

Overall the season was less stormy than expected apart from minor hail in Corton-Charlemagne, Gevrey-Chambertin and Puligny-Montrachet, plus one really devastating storm in Rully on 12th July following a more minor attack in June.

August began clear and sunny but the July pattern of showery days returned with temperatures below or approaching the seasonal norm. There was at least some rain fall from 3rd to 8th August and again on 12th, 14th and 15th, though little sustained rain and happily avoiding any violent storms. But some local rot was now appearing in a few red wine vineyards, though the whites continued to look healthy. 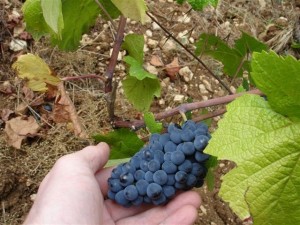 reported lower malic and higher tartaric acidity compared to the equally early season of 2007, a good thing as the wines will be better balanced. Meanwhile a period of hot humid weather began on 17th with heavy overnight rain, continuing though without precipitation for the best part of a week. Then, on Wednesday 24th came a break in the weather after another hot start. The wind swung round to the northwest and brought occasional showers, with rumbles of thunder, along with a welcome drop in temperature.

One or two people began on 24th, picking plots which were ahead of schedule or in danger of major rot issues, but the weather forecast was poor for Thursday (in fact just one very heavy shower over lunch) and terrible on Friday (heavy rain for most of the day, while Saturday was grey and drizzly in the morning before perking up in the afternoon. The sun returned on Sunday but with lower temperatures and a fresher feel, allowing the ground time to dry out without advancing any rot too precipitately.

We could certainly have done without the rain at the end of last week, but nonetheless all is set fair for harvest to begin in earnest this week, with a relatively good forecast to look forward to. There is not much difference in timing between Côte de Beaune and Côte de Nuits this year, with the Mâconnais a bit further behind.