One of the perks of working at Berry Bros. & Rudd is having the opportunity to learn about, and sometimes try, wines from all over the world. What’s so interesting about wine is that there are so many different styles that everyone can find one to suit their taste. Favourite wines are not just about flavours and aromas, who you tried it with, what you ate with it and where you tried it also adds to the experience.

Over the next few months, we are going to run a series of blogs called “My Favourite Wine” written by various Berrys’ employees about their favourite or most memorable wine. We hope this will give you a chance to get to know the team here at Berrys. Below is the first post in this series by Kate Janecek from our Fine Wine Team.

Everyone who works in wine will tell you that there is always that moment with Burgundy when you finally get it. Mine was an utterly definitive moment for two reasons: one, it was my birthday and two, I was celebrating at The Square, an exceptional restaurant in central London.

It had been bought for me as a surprise though I didn’t understand the full extent of how special a gift it was until I had my first smell. Pure, streamlined, intense red fruits of redcurrant, cranberry and sweet smokiness met my nose and transported me to a place I had never been close to. The palate was linear as I expected from the nose but with a lush freshness that was entirely unexpected in a 16-year-old wine. This bottle could have comfortably aged for another decade without losing any integral structure or freshness. 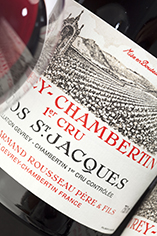 Without torturing you too much, I can say that it was 1993 Clos St Jacques from Domaine Armand Rousseau. This was my first experience with Rousseau’s wines but will certainly not be my last and since then I have had various vintages of his Clos St Jacques. It was a wine that transcended any need for food pairing, it went with everything – crab, lamb and even a raspberry soufflé!

There are five producers who share this small plot of land and create wines of varying quality levels. Rousseau is without doubt the “King of Clos” but there are good efforts made by Bruno Clair, Jadot, Esmonin and Fourrier as well. Although Clos St Jacques is considered a Premier Cru, Rousseau’s version tends to be on par or indeed above many Grand Cru efforts from other producers.

I have since found that Rousseau’s wines are almost universally well-made regardless of vintage or vineyard.  He follows the adage of “do one thing and do it very, very well” – the Rousseau hallmarks of freshness, concentration and precision.

That experience was my defining moment with Burgundy and gave me a greater understanding as to why people get so excited about such a complex, diverse and difficult region.  It takes many attempts and a great amount of patience to work your way through all the vineyards and producers, a thought that is both exciting and overwhelming for the future!

Kate is based in our Basingstoke office with the rest of the Fine Wine Team where she can normally be found on the phone giving fine wine advice to her customers.

What’s your favourite wine and why? Let us know on Twitter and you could win the chance to write in the My Favourite Wine series.

One Response to “My Favourite Wine – Kate Janecek”